This article by partner Leslie Spencer and associate Marta Belcher was published by Law360 on October 10, 2017.

Blockchain — the distributed ledger technology underlying bitcoin — has the potential to have a revolutionary impact far beyond cryptocurrencies. Fundamentally, a blockchain is an immutable record of transactions — each one cryptographically verifiable and linked to the other transactions — that allows for accurate and secure transfers of digital assets without requiring a middleman or trusted broker such as a bank. IBM Chairman and CEO Ginni Rometty has stated that “blockchain will do for trusted transactions what the internet has done for information,”1 and a recently published World Economic Forum white paper argued that blockchain is creating an “internet of value.”2 Whether the mainstreaming of blockchain is as imminent as some suggest, a huge amount of investment is flowing into the development of blockchain applications in sectors ranging from financial services to health care to supply chain management.

A recent flurry of patent applications related to blockchain has led to, on the one hand, predictions of a “looming war” for blockchain patents,3 and, on the other, industrywide efforts to employ defensive patent licensing strategies for blockchain technology. It is clear that early movers have begun to apply for — and receive — patents on blockchain-related technology. Blockchain patenting activity in the U.S. includes applications filed by (1) major financial institutions like Bank of America, MasterCard, Visa, Goldman Sachs, U.S. Bank, American Express, Wells Fargo, and JPMorgan Chase, (2) large technology companies like Amazon.com, Facebook, IBM, and Dell, and (3) blockchain-focused startups like Coinbase, Coinlab, Chain and 21 Inc.

Theoretically, it is possible that Nakamoto filed patent applications on his foundational concepts of blockchain long ago and, none of those applications has been made public nearly a decade later. However, such a scenario is highly unlikely. As a result, the fundamental concept of a blockchain has been effectively dedicated to the public — almost certainly in the United States, and likely in the rest of the world.

Interestingly, in the past few years, someone claiming to be Nakamoto — an Australian computer science professor named Craig Wright — has filed 73 patent applications related to blockchain technology in the United Kingdom via an Antigua-registered entity named EITC Holdings Ltd.5

Today there are many pending applications — and some issued patents — covering specific applications, use cases, and improvements on blockchain technology. A 2016 Deloitte survey found that 21 percent of respondents from various industries stated that their organizations had filed for blockchain-related patents. Among consumer products and manufacturing companies, 38 percent of respondents said that their companies had filed blockchain-related patent applications.6 One example is SKUChain, which has filed for several patents covering applications of blockchain related to supply chain management.

The table below highlights 25 issued U.S. patents related to blockchain technology from a range of industry sectors. These patents include applications of blockchain technology for securities settlements, certifying ownership of files, messaging, managing digital identities, tracking supply chains, user authentication, password management, and robotics. They also include improvements to blockchain technology such as systems and methods for creating a multibranched blockchain with configurable protocol rules, analyzing blockchain transactions, and storing and retrieving blockchain blocks. The time from filing to the date each patent was granted in this sample had a wide range of 175 to 1,145 days, with a mean of approximately 568 days, or about a year and a half. 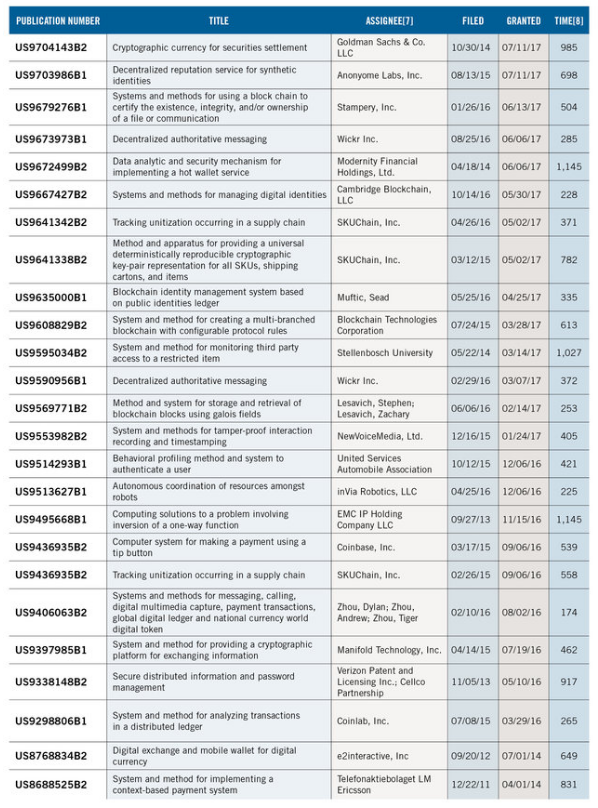 In response to blockchain patenting activity, blockchain companies and other stakeholders have begun collaborating to develop a patent pledge or patent pool for patents related to blockchain technology. Some companies, like Coinbase and Blockstream, have already publicly pledged to use their patents for purely defensive purposes.

Patent pledges are public commitments that companies make to license their patents in a particular manner.10 Pledges offer a way for companies to continue to patent their inventions while assuring the public — and potential employees — that their patents will be used defensively rather than offensively. Some pledges are multilateral (also sometimes referred to as “patent pools”), meaning that, by taking the pledge, companies opt into networks with other companies that have made the same pledge (for example, by promising not to offensively assert patents against any other member of the network that has made the same commitment). For example, when companies adopt the defensive patent license (DPL), they opt into a network in which each company has promised not to sue any other company in the network for patent infringement.11

Some patent pledges are specific to a particular technology — for example, the Open Invention Network (OIN) owns hundreds of patents that it licenses for free to any company that promises never to assert its own patents against Linux technology.12 Other patent pledges bind patents only under certain conditions; for example, participants in the License on Transfer Network agree to license their patents to all other participating companies, but each license only becomes effective if the patent is transferred to a third party.13 Companies can also make pledges unilaterally, as demonstrated by Twitter’s "Innovator’s Patent Agreement" (IPA), through which Twitter committed to its employee inventors that it will not make offensive use of any patent without the inventor’s permission.14

Since 2015 or earlier, blockchain companies and stakeholders have been discussing the possibility of a blockchain-specific patent pool. In general, a patent pool is an agreement between two or more patent owners to license one or more of their patents to one another or to third parties. In 2015, dozens of blockchain stakeholders formed a working group and held a series of “Blockchain Patents Roundtables” at Harvard’s Berkman Center for Internet & Society and Stanford Law School.15

One possible approach is for blockchain companies to create a blockchain-specific multilateral patent pool, whereby members would cross-license each other’s blockchain-related patents. Such a patent pool might be similar to — or an extension of — OIN.16 OIN, a company launched in 2005, acquires patents and patent applications and makes them available royalty-free to any entity that agrees not to assert its patents against the Linux ecosystem.17 In addition to receiving licenses to OIN’s independent defensive patent portfolio, OIN licensees offer free patent licenses to one another on patents that relate to the Linux system. OIN adopted this model in order to help companies feel more secure in making significant investments in Linux technologies. Blockchain companies might adopt a similar patent pool model for blockchain technology, or OIN could simply expand its mission to include blockchain-related technology in addition to Linux.

In the meantime, some blockchain companies have moved forward with unilateral patent pledges. For example, in July 2016, Blockstream introduced a modified version of Twitter’s IPA.19 By adopting the IPA, companies promise their employees that any patents assigned to the company will not be used to sue anyone offensively without the inventor’s permission. However, Blockstream made modifications to certain provisions of Twitter’s original IPA. For example, the IPA defines “defensive” to allow companies to sue any entity that has offensively asserted patents against anyone in the past 10 years. This definition greatly increases the number of companies that a holder of an IPA-licensed patent could target without the inventor’s consent. Blockstream’s modified version of the IPA attempts to narrow the set of such potential targets.

Blockstream also opted into the DPL, which has been described as a nonaggression pact for patents. Through the DPL, companies commit to never asserting any of their patents offensively against any other company that has also committed to the DPL. However, the DPL currently has only a few members. Coinbase has signed The Patent Pledge — a promise not to use software patents offensively against companies with fewer than 25 people — and has stated that Coinbase’s reason for obtaining blockchain-related patents is to “use them defensively to protect Coinbase from patent trolls, and help ensure the bitcoin ecosystem continues to grow.”20

In March of this year, the Chamber of Digital Commerce — a trade association dedicated to promoting the understanding, acceptance and use of digital assets and blockchain technology — announced the creation of the Blockchain Intellectual Property Council, which will consider defensive patent licensing strategies.21 More than 40 companies and institutions agreed to participate in the Council, including Blockstream, Bloq, Civic, Cognizant, Digital Currency Group, Gem, Medici Ventures, Microsoft, T0.com, TMX, and Wipfli.22

It remains to be seen how companies will ultimately protect and share blockchain innovation; however, these defensive licensing strategies could play a role ensuring that blockchain technology continues to flourish.