As part of its annual review, the Ontario Securities Commission (OSC) conducted a comprehensive evaluation of its service commitments, including the temporary changes announced on December 7, 2021.

The temporary service commitment changes that were announced by the OSC on December 7, 2021, and generally related to prospectus filings and applications for exemptive relief, have been extended to March 31, 2023, with the exception of service standard 3.9 Prospectus Amendments: Completion of Review, which has returned to the original 40 working day timeline that was in effect prior to December 7, 2021.

The OSC previously cited the extraordinary growth in Ontario’s capital markets as the reason for the temporary extensions which were originally scheduled to end on June 30, 2022.

In addition to extending the temporary service commitments, the OSC announced changes to the following service standards, among others, effective July 1, 2022:

Prospectus Amendments: Filing an amendment to a preliminary or current prospectus

When filing an amendment to a prospectus after a final receipt has been issued by the OSC: 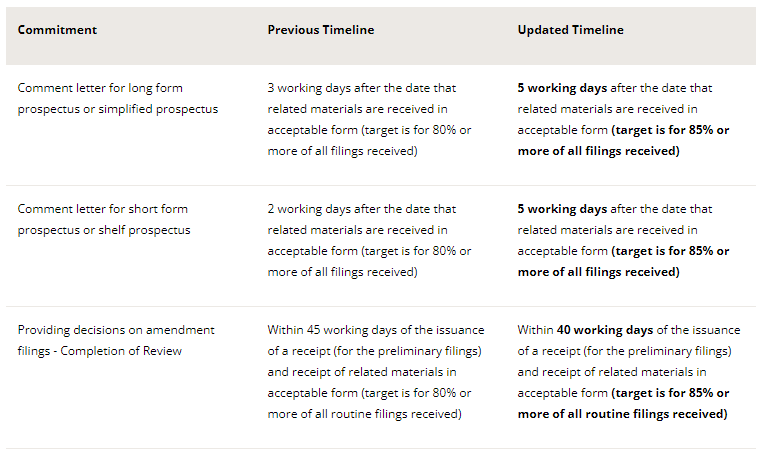 As has previously been the case, novel and complex filings will not be subject to set timelines and will take longer for the OSC to review. However, the OSC has committed to providing regular touchpoints to advise with respect to progress.

Finally, in some cases, the service commitment timeline has not been extended but rather the proportion of filings that the OSC will aim to review within the set out timeline has been increased. Such changes were made in addition to the changes referenced above. For instance, the OSC previously targeted meeting its applicable service commitment for 80% of comment letters for short form prospectuses or shelf prospectuses. This target has now been increased to 90% in each case.