Yet another trademark dispute has been taken to court by APPLE. This time, APPLE lodged a trademark opposition against the letter „j“ (fig.) trademark of an Italian incorporation by the name „Steve Jobs“ in front of the Swiss Federal Administrative Court (FAC) (B-1176/2017 (FAC)).

After APPLE had failed to cancel the opposed trademark before the Institute for Intellectual Property (IPI), it appealed the case to the FAC. However, with its decision dated 10 January 2019, the FAC confirmed the ruling of the IPI and held that there is no likelihood of confusion between the APPLE trademarks and the opposed mark.

The court held that the overall impression and distinctiveness of a device mark with an inherent meaning is characterized by both its shape as well as its meaning. Thus, their similarity on either level contributes to a risk of confusion, whereas differences can prevent such a risk. In particular, a risk of confusion exists if the opposed mark only constitutes a variation or modernization of the prior trademark without conveying an individual impression. 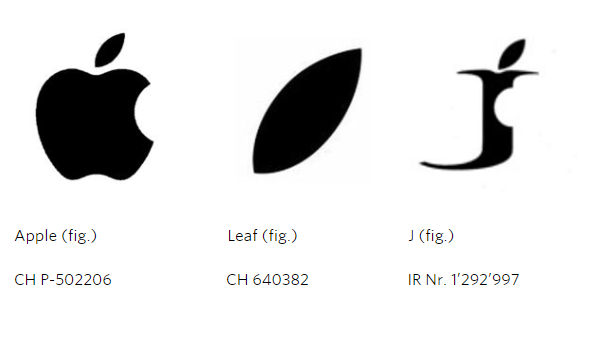 In its assessment of the similarity of the signs, the court observed that the overall impression of the opposing trademark 1 („the apple“) was characterized by a stylized apple (1) coloured in monochromatic black (2) with a semicircle semi-circular recess on the right side (3), and a protruding leaf. The opposed trademark, in comparison, features the form of a stylized letter „j“ (1) and is also coloured in monochromatic black (2) with a semi-circular recess on the right side (3) and an elliptical dot on the „j“ (4). Furthermore, the opposed trademark incorporates the opposing trademark 2 („the leaf“), thereby resulting in two matching characteristics, namely the form of the leaf (1) and its colouring in monochromatic black (2). Due to their accordance in three, respectively two, characteristic features, the court found the opposed mark and the opposing trademarks 1 + 2 visually similar.

The outcome of the decision is correct. However, breaking the trademarks down into elements should generally be avoided. The trademarks in dispute evidently transport a different meaning („apple“ / „ellipse“ vs. „j“), which is the predominant motive of the signs and imprints itself in the memory of the consumers. Consequently, the same conclusion could well have been reached by finding that the signs in their overall impression lack visual and conceptual similarity.

In order to assert claims in relation to an – possibly even intended – unfair reference to APPLE, APPLE was referred to art. 15 Trademark Act and art. 3 lit. e Unfair Competition Act, and thus to civil proceedings.