How many times have you been caught with low battery power on your mobile and no charger? ‘Zero-power communications’ means devices can be battery-less and cordless because they are powered, quite literally, ‘out of thin air’. While some time off (if ever) for complex devices like mobiles, zero-power communications is on the verge of revolutionising the Internet of Things (IoT), according to a recent while paper from a leading Chinese equipment vendor, Oppo.

When ‘batteries included’ is a problem for IoT

The Oppo paper notes that while advances in IoT devices have driven towards lower power consumption and lower costs, the need for an inbuilt power source (i.e. a battery) can be a constraint on the ubiquity of IoT, for the following reasons.

IoT devices are often intended to be left in place for a long time, such as remote climate or soil monitoring devices ‘seeded’ across harsh external environments or sensors ‘buried’ in the fabric of buildings to support preventative maintenance. But ‘set and forget’ is only as good as the battery life, and repairing or replacing batteries (or seeding out replacement devices) across a dispersed, difficult access fleet of IoT devices can be expensive.

Other potential uses of IoT require devices of an ultra-small scale, which is hard to achieve with a battery onboard. For example, an IOT terminal used for food chain management in the form of electronic label on packaging.

Wearable devices using battery powered IoT has drawbacks: the batteries can be bulky on or in the garment, batteries don’t take kindly to being washed or dry cleaned, and periodically needing to plug in your cardigan or scarfs is inconvenient.

There are some environments in which battery-powered devices are potentially impractical. Many industrial sensor nodes may need to operate in environments where conventional batteries are not suitable because of the requirements of the physical and chemical characteristics of the battery: e.g. in high/low temperatures, or attached or adjacent to high-speed moving or rotating parts, such as aircraft engines.

A rapidly expanding use of IoT is for in-body monitoring and scanning. Injecting or ingesting battery-powered devices into the human body can be potentially dangerous.

Lastly, batteries (and the transmitters they power) add to the cost of IoT devices. Lowering IoT device costs will enhance competitiveness with alternative technologies, such as bar codes.

So, how can IoT do without batteries?

The most obvious source of ‘incident’ RF waves for RF energy harvesting and backscattering is the transmitter in the network to which the IoT device is connected, such as a mobile tower. However, backscatter devices can be ‘omnivorous’: they can communicate with each other by using harvested power and signals transmitted from any ambient RF sources such as TV towers, FM towers, cellular base stations, and Wi-Fi access points.

The Oppo report describes the cumulative impact of these techniques (plus low power computing) in the following terms:

“..in terms of power consumption, the terminal power consumption is expected to be reduced from tens of milliwatts of NB-IoT terminals to dozens of microwatts or even several microwatts. In terms of cost, the terminal cost is expected to be reduced from more than ten RMB yuan [A$2.00] of the cheapest NB-IoT terminal in the above technologies to 1 RMB yuan [$A0.21] or even lower.”

While zero-power communications devices can use unlicensed or class licensed spectrum, the Oppo paper identifies distinct advantages in using them within conventional mobile networks:

The following diagram from the Oppo report illustrates how zero-powered IoT could be folded into a mobile network: 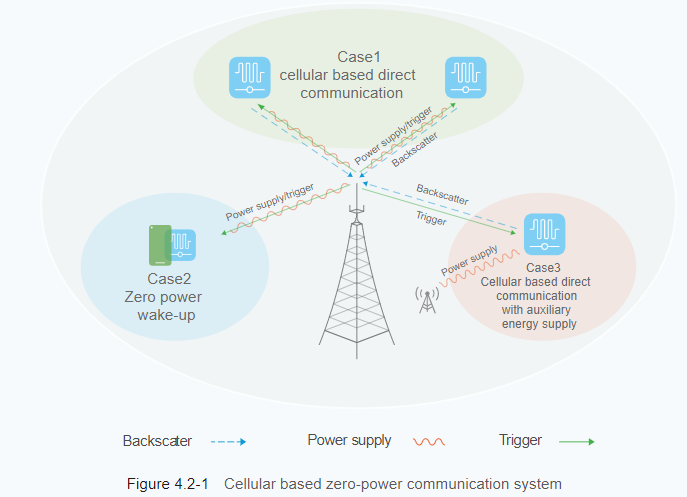 But there are limits to pulling energy from ‘thin air’

The first limitation is transmission distance. The standard coverage is around 100ms, which works well in a factory setting but not for IoT ‘seeded’ over much wider areas, such as in a rural setting. The distance limitation is not so much the backscattering distance (i.e. the distance over which the IoT can reflect signal) but the forward distance (i.e. the maximum distance over which the IoT device can harvest energy). While the maximum backscattering distance when using 700MHz is over 600 ms, the maximum forward signal distance is only 68ms. The forward distance can be increased by using high-gain antennas at the transmitting site (e.g. the base station), but paradoxically, that substantially reduces the backscattering distance. Hence, in many settings, case 3 above where the zero-powered IoT devices ‘hang off’ powering nodes scattered through the network.

Second, while making the zero-powered devices much less sophisticated RF devices reduces the power requirements, it creates its own complications. In traditional mobile systems, flexible resource allocation between the end user device and the base station (e.g. using multiple spectrum bands) can meet the requirements of different service type with diverse peak rate, latency and so on. But for zero-power terminals with extremely low cost and complexity, the flexibility of resource allocation that they can support will be greatly reduced because they are so simplified RF devices.

The Oppo paper gives the example of synchronisation. In a traditional mobile communication system, in order to reduce the interference between multiple users and the interference between uplink and downlink in TDD system, there needs to be tight, very exact requirement of synchronization between the network and the end user device. Traditional devices, such as smartphones, Machine Type Communication devices and other IoT devices, can meet the synchronization requirements of mobile systems. If a zero-power terminal is to be ultra-low cost and complexity, it can only be equipped with a simple oscillator of small size and low power consumption, such as RC oscillators, to provide the clock. However, the accuracy of RC oscillators is poor, with errors up to 1% or even higher.

This is not Sci-fi

Many modern implantable medical devices (IMDs), such as cardiac pacemakers, have wireless communication capability which allows medical professionals (or patients) to externally monitor the device’s performance.

There is an increasing concern that IMDs are vulnerable to attack, including a ‘battery depletion attack’ or battery-DoS. As the radio transmitter has to draw on the same battery power as the pacemaker function, the transmitter typically goes into ‘sleep mode’ until ‘woken up’ by an external signal, such as from the treating doctor’s tablet. A battery-DoS involves interfering with the ‘wake-up/sleep modes’, such as by speeding them up into a continuous cycle, to deplete the battery. The cardiac pacemaker can be fairly readily ‘hacked’ by anyone standing nearby the patient.

There are proposals to use zero-powered device incorporated into the pacemaker to be the ‘gatekeeper’. The device would use the inbound signal (from a legitimate or illegitimate source) to power security protocols and checking. Only once it was satisfied that the signal was from a legitimate source would it ‘wake up’ the transmitter. This would avoid the nefarious signals running down the battery power.