Under the administration of the new Malaysian government, the following rounds of legislative amendments have been effected to the Malaysian Customs Act 1967 (“the Act“):

The Amending Acts brought about changes to various aspects of the Act, including, among others, penalties for offences under the Act, review and appeal process, enforcement powers of customs officers and regulation of customs agents. Key changes under the Act are summarised as follows:

(b) increased penalties for offences under the Act A summary of key increments in penalties are set out in the table below: 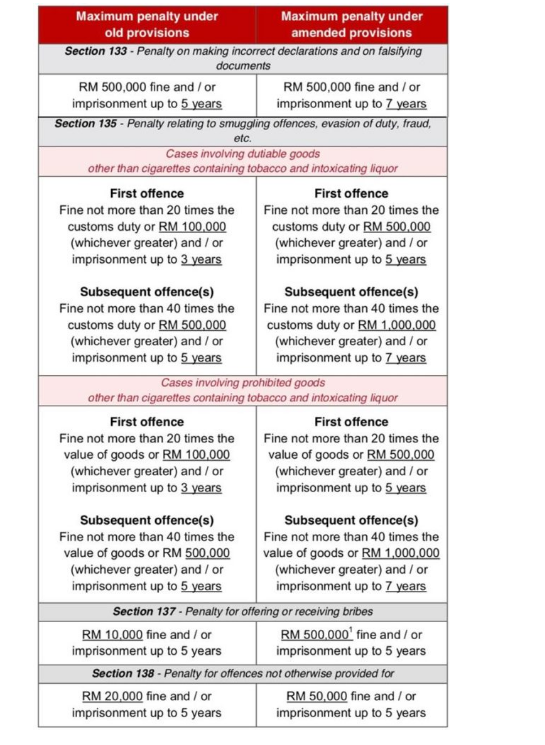 The amendments to the Act result in an overall more stringent customs regime as can be gleaned from the significant increase in quantum of penalties for customs non-compliances as well as the enhanced enforcement powers accorded to customs officers. Whilst this is the case, the amendments also appear to provide a more robust appeal process to deal with any grievances that may arise in relation to the Act, striking a fair balance between deterrence and ensuring an overall business friendly outlook.

At this juncture, Malaysia still does not have a voluntary disclosure regime, which would help genuine businesses better comply and regularise their operations visa-vis the Act. However, this may potentially change if and when Malaysia decides to ratify the Comprehensive and Progressive Trans-Pacific Partnership Agreement, which has already entered into force on 30 December 2018 for Mexico, Japan, Singapore, New Zealand, Canada and Australia.