This edition of snapshot looks at the latest legal developments in pensions. The topics covered in this edition are:

The Pensions Regulator (TPR) has issued its latest corporate plan for 2019 to 2021. The plan sets out what TPR considers to be the core regulatory risks in the pensions landscape and the six priority areas that it will focus on to address those risks.

As well as highlighting longstanding risks such as fraud and defined benefit (DB) scheme underfunding, TPR also focusses on some evolving risk areas, including:

The table below sets out TPR’s six priorities for tackling the risks it has identified, along with some takeaways we have identified from TPR’s explanation of each priority. 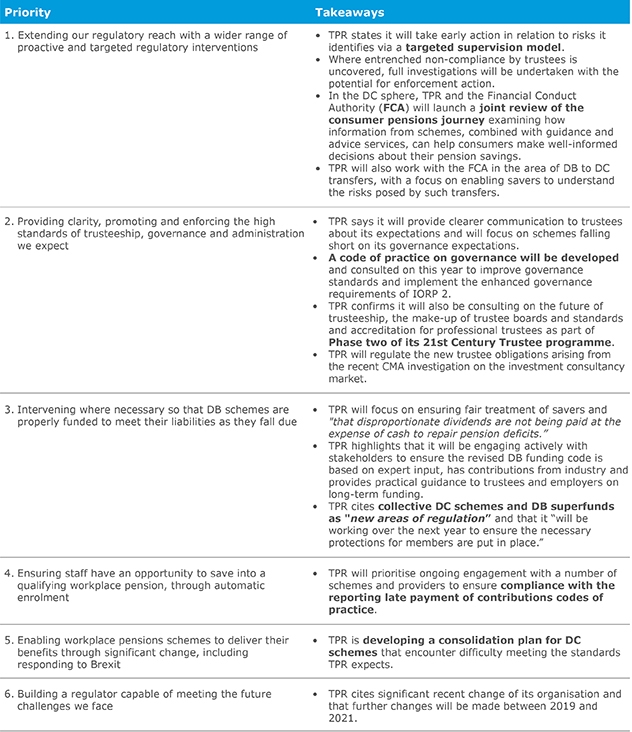 This is a judgment of the Court of Appeal handed down on 10 May 2019. The case related to whether pension in payment increases referable to pre-1997 pensionable service (the Pre97 Increases) had been validly granted.

The decision to grant the increases had been confirmed at a resolution passed at a meeting of the Trustees in 1991 and the original High Court decision had found that employer consent had been given in relation to the grant of the Pre97 Increases. However, the rules of the Bic UK Pension Scheme which were in place in 1991 did not contain a power (such as a power of amendment) which would have allowed the Pre97 Increases to be granted. In 1993 a trust deed and rules (the 1993 TDR) was executed which contained, amongst other things, a more flexible power of amendment which would have allowed for the grant of Pre97 Increases. The 1993 TDR was stated as having effect from 1990. The argument that had succeeded in the High Court was, therefore, that the 1993 TDR gave valid effect to the decision taken in 1991 to grant the Pre97 Increases.

The Court of Appeal overturned the High Court decision and decided that the powers in the 1993 TDR could not be utilised to give effect to a decision taken in 1991 simply because the 1993 TDR purported to be effective from 1990.

Separately and although not formally decided upon (the appeal succeeded on the issue of retrospectivity), the Court of Appeal gave a provisional view on the meaning of a written resolution where the power of amendment prescribed that a written resolution could be used to amend a scheme. It was held that the 1991 trustee meeting minutes which set out an intention to grant the Pre97 Increases merely recorded a resolution on future policy. In order to be a written resolution, the trustees needed to set out the text of the amendments, and ensure it was signed by all of the trustees and referenced the employer's consent. This should, therefore, be borne in mind when effecting amendments by way of written resolution.

The DWP concludes that TPR is an effective body

The DWP has published its Tailored Review of TPR. Tailored reviews are periodic reviews that look into the continuing need, efficiency and good governance of public bodies. TPR is subject to a Tailored Review at least once in the lifetime of a Parliament.

The DWP notes that TPR is a “well-run organisation that effectively carries out its statutory objectives”. In light of recent developments such as the collapse of BHS, it recognises that there is a continuing need for TPR and its functions and the DWP supports the increase in TPR’s use in recent years of its existing powers.

TPR has accepted the recommendations and its progress against them will be considered at the next Tailored Review in five years’ time. It will be interesting to see if, by then, TPR has been afforded additional powers and if the DB and DC codes of practice have materially changed.

Ombudsman orders trustees to pay £2.4 million to scheme for breaches of investment and trust law duties

The Ombudsman has determined that the trustees of The Henry Davison Limited Pension Scheme (the Scheme) breached their investment and trust law duties when investing the Scheme assets and has ordered them to pay £2.4 million to the Scheme in relation to associated investment losses.

Following a complaint made by 14 Scheme members, the Ombudsman found that the trustees were personally liable, jointly and severally, for a number of breaches, including:

The Ombudsman observed that the Scheme was administered “almost entirely without established process or procedure” and that this had caused the Scheme members to suffer an “exceptional level of distress and inconvenience” over a prolonged period of time. It is not therefore surprising that he also ordered the trustees to pay £5,000 to each of the 14 complainants (one of the highest non-financial loss awards made by the Ombudsman to date) and stated his intention to refer the Scheme to TPR so that it can decide whether to appoint an independent trustee.