In August 2021, the UK government published its Hydrogen Strategy and a number of consultations on policies to encourage the development of a UK low carbon hydrogen sector (see posts (1) to (4) in this series here). In a sector where countries are competing keenly to be among the first to capitalise significantly on the coming low carbon hydrogen revolution, momentum is crucial, and April 2022 saw the publication of a further batch of hydrogen policy documents, including the government’s responses to the earlier consultations.

This is the second in a series of posts on the April 2022 documents (see here for the others): it focuses on the outcome of the consultation on a Low Carbon Hydrogen Business Model (Consultation), in which the Department for Business, Energy & Industrial Strategy (BEIS) sets out its proposed policy and current thinking in light of the Consultation responses, and is accompanied by indicative heads of terms for the Business Model. As outlined in two of our earlier blog posts (see here and here), the Business Model is intended to provide financial support to the low carbon hydrogen sector by incentivising production and the use of low carbon hydrogen by overcoming the cost gap between low carbon hydrogen and cheaper higher carbon alternative fuels.

The Business Model will support newly constructed hydrogen facilities built for the specific purpose of producing hydrogen that can meet the requirements of the UK Low Carbon Hydrogen Standard which is being developed. Existing producers of hydrogen looking to retrofit CCUS technology so as to produce “blue” rather than “grey” hydrogen will not be eligible for support through the Business Model (but may be eligible to apply for support through BEIS’s separate Industrial Carbon Capture Business Model). Projects that produce hydrogen as a by-product will also not be eligible.

BEIS has not yet determined whether to enable blending of up to 20% hydrogen (by volume) into the GB gas grid and is targeting a policy decision in 2023. BEIS currently views blending as a transitional option only and not a required step for the use of hydrogen in heating. BEIS is keen to ensure that the supply of pure hydrogen is prioritised for those end users who require it to decarbonise.

While projects that export hydrogen will be eligible, the specific volumes exported will not be eligible for support payments.

The Consultation highlights two main risks for the production of low carbon hydrogen:

BEIS is proposing to provide support to overcome these risks under a Low Carbon Hydrogen Agreement (LCHA). The LCHA will have many features of the existing Contract for Difference (CfD) that supports low carbon electricity generators and will be designed to provide a revenue stabilisation mechanism and ultimately encourage hydrogen production.

As under the existing electricity CfD, the LCHA will provide for payments to be made representing the difference between a reference price for the producer’s output and an agreed strike price for that output.

Recognising, however, that using the Achieved Sales Price as reference price does not encourage the producer to achieve a higher selling price, and might distort other energy markets, BEIS is also proposing that the reference price will be floored at the price of natural gas. To the extent there is a shortfall of the Achieved Sales Price beneath the gas price, it will not be topped up by the LCHA.

As a further incentive for producers to seek higher priced sales and to aid price discovery, a contractual mechanism will be included that allows the producer to share in the benefit of sales values above the natural gas price floor. Options being discussed include an amount linked to the increment by which the reference price exceeds the natural gas price floor for each unit of hydrogen sold and a constraint on sale prices above a certain level. The contractual mechanism may result in the subsidy actually received being greater than the difference between the reference price and the strike price. 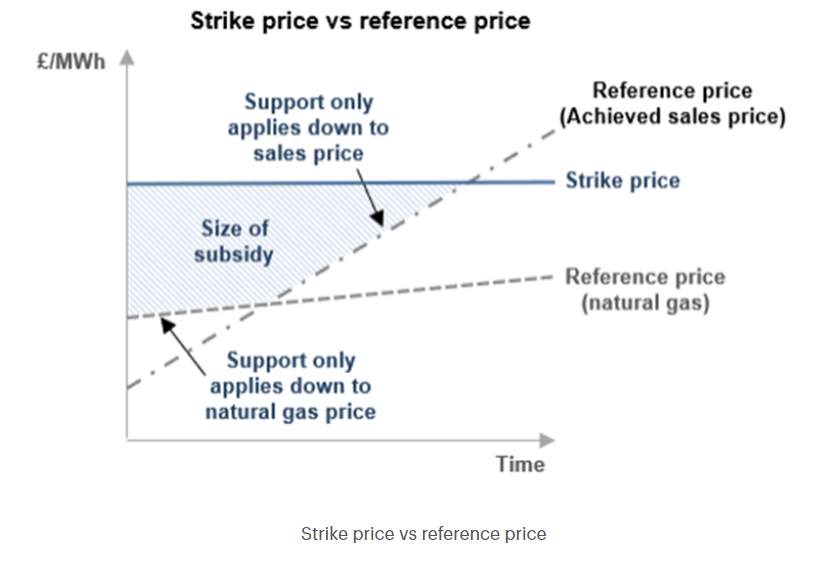 BEIS states that the strike price will reflect the cost of low carbon hydrogen production as well as an allowed return on investment for the relevant project on a project-by-project basis (although BEIS is still considering this position). The level of cost components and the strike price are likely to vary for different low carbon hydrogen technology types. The intention is to move to a competitive allocation process (e.g. an auction) in the medium term. The UK government’s recent Energy Security Strategy sets out the ambition to move to price competitive allocation by 2025. BEIS is minded to include different allocation rounds/pots for future competitive allocation.

BEIS is considering the constitution of the strike price but has indicated the following non-exhaustive list:

BEIS is considering the indexation of the strike price to protect: (i) producers against unmanageable and uncontrollable changes to input costs; (ii) government from oversubsidy and (iii) end users with security of supply. BEIS has yet to determine the preferred indexation option.

Under the electricity CfD, difference payments are made per MWh of electricity output. Under the LCHA, the multiplier will be sold units of hydrogen. But in what units can the strike price, the gas price floor and the Achieved Sales Price Payments be expressed on a like-for-like basis? BEIS states that payments will be calculated on a £ per MWh higher heating value (HHV) basis. HHV has been chosen because the gas price is reported in HHV in the UK, and it reflects the full energy potential of the relevant fuel.

Volume support will only be available if sales are made. If actual sales fall to zero, there is no volume support to be provided. This was flagged as a major concern during the consultation process (especially where a project has a sole offtaker that falls away) but BEIS indicated that value for money was important for the Business Model. 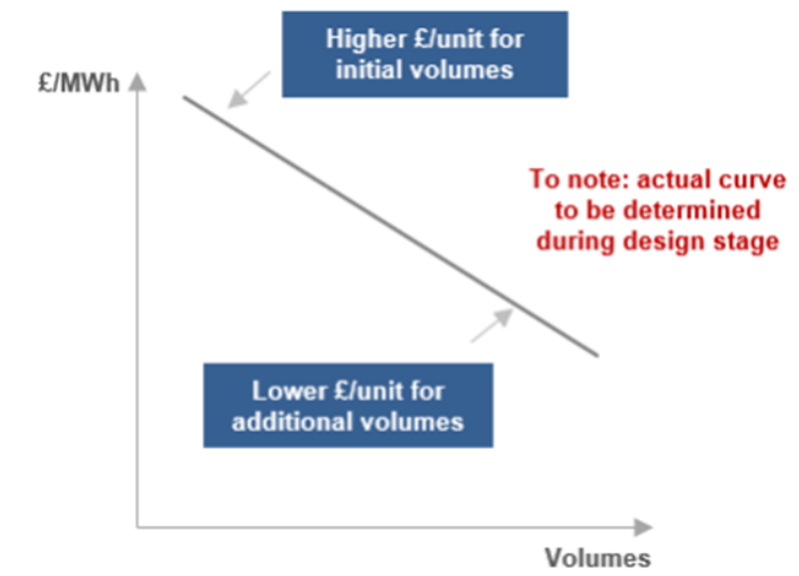 As for the treatment of higher than expected volumes, BEIS states that any increase in the volume of hydrogen produced relative to that agreed in the hydrogen support contract between the producer and the contract counterparty will not be subsidised. However, no detail is given as to whether the producer, if it sells the additional volume, can retain the additional revenue from such sale. Timing the calculation of any volume support (such that it is only calculated once production levels for a certain period are known) may go some way to reduce any overcompensation risk.

BEIS intends to allow projects where the producer and consumer of hydrogen are the same entity (or closely affiliated) to be eligible. However, BEIS is currently considering options to accommodate this arrangement where there may be little or no commercial incentive for the producer to increase the price that the producer receives from the sale of its hydrogen and facilitate price discovery.

The use of intermediaries in the supply chain and reporting requirements is being considered (especially where the intermediaries take ownership of the hydrogen) to ensure that subsidised hydrogen is sold to qualifying end users and to avoid oversubsidisation if intermediaries are used.

BEIS also intends to allow hydrogen producers to receive subsidies for sales to feedstock users but notes the potential for overcompensation and causing potential market distortions and so is considering if additional measures are required (e.g. relying on the price discovery mechanism to incentivise sales at a higher price to feedstock users or using an alternative reference price).

The Low Carbon Hydrogen Agreement will initially be funded by the taxpayer, but BEIS is expecting to transition to a levy funding taking place no later than 2025, subject to legislation being in place. Meanwhile, the government has announced an initial £100 million will be provided as part of the Industrial Decarbonisation and Hydrogen Revenue Support (IDHRS) scheme. This is also to cover the ICC business model. Further, up to £100 million of funding was announced as part of the Net Zero Strategy to award contracts of up to 250MW of electrolytic hydrogen production capacity in 2023.