The Annual Vacancy Fee was introduced as part of the Federal Government’s comprehensive housing affordability plan under the Treasury Laws Amendment (Housing Tax Integrity) Act 2017 (Cth) (Act). The fee is intended to encourage foreign owners of residential real estate to make their properties available for rent where they are not occupied as a residence and as a consequence to increase the number of properties available for Australian residents to live in.

Who is subject to this regime?

The Annual Vacancy Fee applies to:

Foreign Owners are defined as:

Who is required to pay?

Foreign Owners are required to pay an Annual Vacancy Fee if their dwelling is not residentially occupied for more than 183 days (six months) in a 12 month period (vacancy year).

The property does not need to be occupied for a continuous block of time but can be an aggregate of 6 months in the year.

What does residentially occupied mean?

Note: The leases referred to are long term leases and not properties made available for short-term leases of less than 30 days (eg. Airbnb or serviced apartment/hotel type accommodation).

When does the vacancy year begin?

A vacancy year is calculated as each successive period of 12 months commencing on the occupation day. The occupation day being the first day the owner has a right to occupy the dwelling.

If the property is incapable of being occupied then the property will not be liable for an Annual Vacancy Fee.

Below are the listed grounds for exemption: 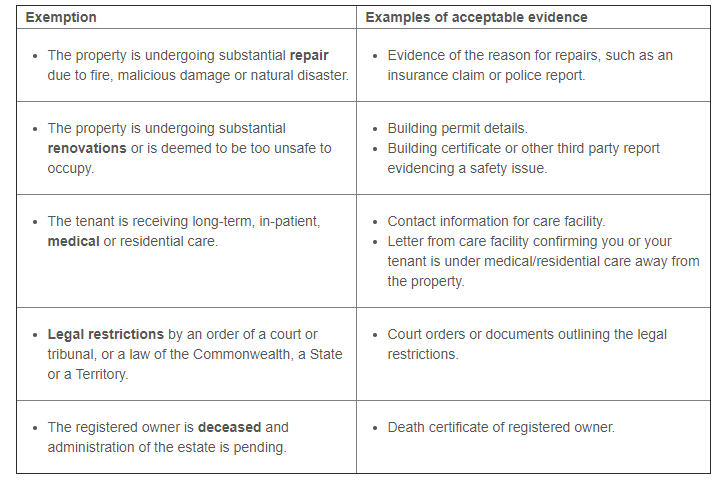 If you have multiple dwellings, a vacancy fee return has to be lodged for each individual dwelling or apartment.

Generally the fee payable will be equivalent to the FIRB application fee paid at the time the application was submitted.

Annual Vacancy Fee returns must be lodged annually failing which penalties may apply for non-compliance (a civil penalty of up to 250 penalty units – or $52,500)