The Government Accountability Office (GAO) has released its report on bid protest statistics for Fiscal Year 2019. As in past years, the GAO’s figures count supplemental protests by the same protester and other parties’ protests of the same procurement as separate cases. This means a few heavily challenged procurements can result in numbers that may not mean exactly what one might expect them to mean. Here, at a glance, are the GAO’s findings: 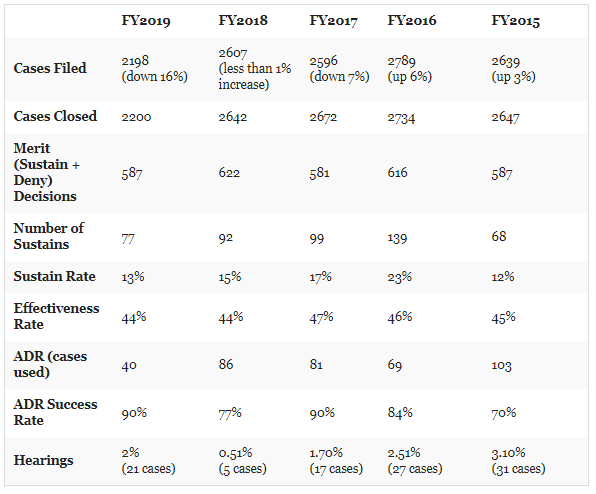 As in prior years, the most interesting figure this year is the 44 percent “effectiveness rate.” Unchanged since last year and remarkably stable over a number of years, this rate reflects the percentage of protest actions where the protester receives some form of relief – either in a published GAO decision sustaining the protest on the merits or in an agency voluntarily taking corrective action without the GAO publishing a decision. This means that, in nearly half of all protests, there are enough problems in the procurement to cause the agency to take corrective action – either voluntarily or as a result of a GAO decision. This does not necessarily mean the protester ends up winning the contract, but it does mean the protester has “won” the protest.With 2,198 protest actions filed in FY 2019 – a 16 percent drop since last year, and the lowest number in the last five years – the total number of bid protests filed continues to relate to a mere fraction of one percent of all U.S. Government procurements. When one considers that the 2,198 figure relates to significantly fewer than 2,198 individual procurements, the fraction is even smaller still. As these statistics show, there is not and never has been an “epidemic” of bid protests.

None of this is surprising. What is surprising in this year’s statistics is that the number of hearings has quadrupled from five cases (0.51 percent of all fully-developed protests) last year to 21 cases (2 percent) this year. Seen in the context of the last five years, however, one sees that FY 2019 is well within the norm, which suggests that FY 2018 may have been an outlier rather than a harbinger of the disappearance of hearings altogether. In any event, even if the FY 2019 hearing numbers are again within the norm of the recent past, 21 hearings out of a total 2,198 cases filed means that hearings continue to be very rare occurrences, indeed.

The last statistic worth mentioning is the dramatic reduction in Alternative Dispute Resolution (ADR), from 86 cases in FY 2018 to only 40 in FY 2019. Of those 40 ADR cases, though, a full 90 percent of them were “successful” in the sense of resolving the protest without a need for formal GAO decision. In a GAO protest, ADR generally takes the form of outcome prediction: the assigned GAO attorney convenes a teleconference with the parties and presents a summary of his or her view of the merits of the protest. This gives the agency an opportunity to announce corrective action if a sustain is predicted and gives the protester the chance to withdraw the protest if a deny is predicted. The GAO typically will offer outcome prediction only if both the protester and the agency agree “seriously to consider” corrective action/withdrawal if the outcome prediction is unfavorable.