The construction industry is high risk and disputes and insolvencies are common. As a result parties to a construction project typically seek to secure the counterparty’s contractual obligations by a variety of means, most frequently a bank guarantee. Principals often regard these instruments as the gold standard of security for its “cash-like” quality. This status stems from its unconditional nature which means that, if called on by the principal, the bank must unconditionally and on demand pay cash to the equivalent amount stated in that guarantee – irrespective of the terms of, or proof of breach of, the underlying construction contract.

But – what actually is a “bank guarantee” and, are they really “as good as cash”?

What is a bank guarantee?

What is frequently called a “bank guarantee” is in fact an unconditional performance bond given by a bank. The use of the term “guarantee” to describe such bonds has been deemed misleading by Courts.[i] This is because a guarantee, strictly speaking, is a contract of suretyship – where the guarantor (the “surety”) takes on a secondary obligation to which it is held only after the liability of the contractor is established.

Usually, an unconditional performance bond or undertaking from a bank (“bank guarantee”) or an insurance company (“insurance bond”) can be called upon by the principal without requiring proof of the contractor’s breach of the construction contract. In this case, the liability of the institution issuing such a bond is primary, and the bond is said to operate autonomously from the construction contract (however, as seen below, this is becoming less so with the erosion of the “autonomy principle”).

Set out below are common characteristics distinguishing an unconditional bond (either a “bank guarantee” or “insurance bond”) from a conditional undertaking or bond (“surety bond”, “contract of surety” or “guarantee”). 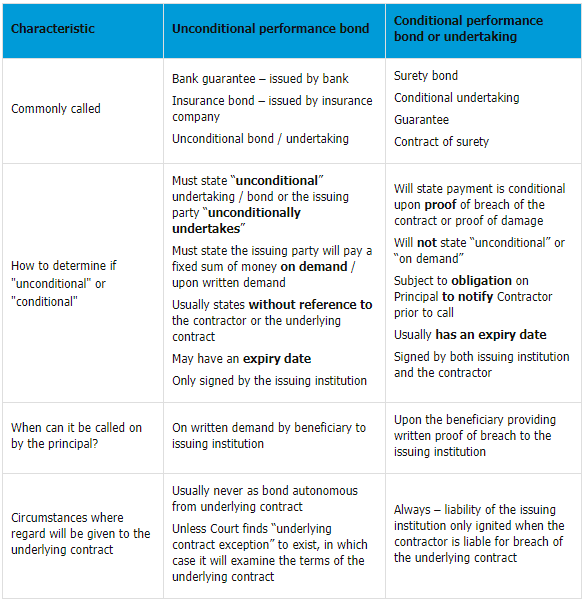 When can a bank guarantee be called on?

If a bond is unconditional, and intended to be cash equivalent, it can (subject to the below exceptions) be called on by the beneficiary upon written demand to the issuing institution, without regard to the underlying construction contract. This is what is known as the “autonomy principle.”

The beneficiary need only have a bona fide claim of a breach of contract.[ii]

Traditionally, Courts have been reluctant to interfere with the autonomy principle as the parties (often sophisticated commercial entities) have agreed to the unconditional nature of the security. Any such interference not only undermines the intention of the contracting parties, but also diminishes the commercial worth of these forms of security.

Here the intended purpose of the security comes into play.

It is common for security under a construction contract to serve a dual purpose, being:

Courts are more likely to uphold the autonomy principle where the parties have agreed that the security is also a risk allocation device.[iii] To allow an injunction to restrain a call on a guarantee that is intended to act as a risk allocation device would defeat the purpose of that security: i.e. that the principal will have access to funds during a dispute between the parties.

In complex transactions involving multiple parties and multiple security instruments, the intended purpose of a particular bond can be critical to a beneficiary’s right to call on that bond – as seen in the recent case of Kawasaki Heavy Industries Ltd v Laing O’Rourke Australia Construction Pty Ltd [2017] NSWCA 291 (Kawasaki) (see our recent case note here).

Exceptions to the autonomy principle

Not surprisingly, the underlying contract exception is the most frequently argued exception. It is also the most contentious, as it provides the greatest opportunity for the erosion of the autonomy principle.

This exception arises where a contractor asserts that the principal is attempting to call on the bond beyond the circumstances in which a call is permitted under the underlying contract, and applies for an injunction to prevent such a call.

For the exception to be established by a Court, there must be “clear words” in the underlying contract that limit the principal’s rights to call on the performance bond.[vi] However, the necessary “clear words” are often difficult to distinguish.[vii]

If established, the Court will then examine the terms of the underlying construction contract to determine whether the principal rightfully called on the bond in accordance with those terms.

Fighting back with a no injunction clause – fruitful or futile?

One way principals have attempted to thwart a contractor from successfully obtaining an injunction restraining a call on a security is by including a “no injunction clause” in the underlying contract.

If Courts are more willing to look behind an unconditional bond to the terms of the underlying contract to determine whether an underlying contract exception exists, then it is thought that more weight will also be given to an express intention of the parties from precluding the contractor seeking an injunction from restraining a call?

However, some recent decisions have cast doubt on this position. In Anaconda Operations Pty Ltd v Fluor Daniel Pty Ltd [1999] VSCA 214, the Court held “It matters not that it may be argued that the latter part of this provision is bad as ousting the jurisdiction of the Courts. The important thing is that both parts of it show an intention that the owner is to be at liberty to call on the security at any time”.[x] Further, the Western Australian Court of Appeal held that if a no injunction clause is unenforceable as an ouster of the jurisdiction of the Court, it is nevertheless permissible to take it into account in construing whether the parties intended the principal to have unfettered recourse to the security.

Therefore, where the parties have expressly agreed that the contractor will not injunct a principal’s right to have recourse to security, Courts appear to struggle to reconcile that intention with an award of an injunction on the basis of a finding that the “no injunction” clause is invalid.

Reviewing the terms of an unconditional performance bond If you are a principal: