Inside Arbitration: A new frontier - What does the Brexit deal mean for cross-borderdispute resolution and for London-seated arbitration?

The transition period under the Withdrawal Agreement has now come to an end and, following the last minute announcement of a deal between the UK and EU on 30 December 2020, businesses across the world are assessing the practical implications of Brexit for doing business in the UK and the EU going forward.

But what does the Brexit deal mean for cross-border dispute resolution? What is the impact on English court jurisdiction clauses and on London-seated arbitration clauses? Below we give some answers to the questions that our clients have been asking over the past days and weeks.

What does the UK-EU Brexit deal say on civil judicial co-operation?

In contrast to the Withdrawal Agreement, the Agreement reached between the UK and the EU does not cover civil judicial co-operation between the UK and the EU member states. This particular issue was always going to be resolved outside the formal trade agreement, but has not yet been so resolved. Significant issues remain as set out in this article. The hope is that the fact that agreement was reached will pave the way for a further agreement on judicial cooperation shortly.

What was the position before 1 January 2021 in terms of civil judicial cooperation?

The UK officially left the EU on 31 January 2020. However, during the transition period established by the Withdrawal Agreement, EU law continued to apply to, and in, the UK, and the UK continued to be treated by the EU as an EU member state for the purposes of international agreements to which the EU is a party. This meant that the Recast Brussels Regulation continued to apply between the EU member states and the UK. It also meant that the UK continued to be treated by the EU member states (and EFTA states where applicable) as a party to the Lugano Convention and the Hague Convention. Each of these instruments has slightly different provisions, but the important takeaway was that where any of these instruments applied, the UK and EU member states would enforce each other’s judgments and would uphold a contractual exclusive jurisdiction clause in favour of each other’s courts, subject to only very limited exceptions.

The Withdrawal Agreement also allowed for the application of other internal EU rules on choice of applicable law and the service of proceedings, maintaining the status quo.

Under the Withdrawal Agreement, the provisions of the recast Brussels Regulation will still apply to claims that were commenced prior to 31 December 2020. However, the position is different for claims commenced in the UK or an EU member state after this date.

What is the situation now in terms of civil judicial cooperation between the UK and the EU and could it change in future?

The UK re-acceded to the Hague Convention in its own right, having previously been party to it via EU membership, with such accession taking effect on 1 January 2021. The Hague Convention therefore remains in force between the UK (now as a separate party) and the EU member states. There is, however, some uncertainty as to whether the EU member states will treat the Convention as having been in force for the UK since 1 October 2015 (when it came into force for the EU member states, at that time including the UK) or from 1 January 2021 (when the UK re-acceded in its own right). The European Commission has so far indicated that it takes the latter view, while the UK the former. This means that where an exclusive jurisdiction clause was agreed before 1 January 2021 (and on or after 1 October 2015), there is some uncertainty as to whether EU member states will treat the clause as falling within the Hague Convention. This is often referred to as the “change of status” risk.

Last year, the UK applied to re-accede to the Lugano Convention with effect from 1 January 2021. However, this requires the unanimous agreement of all the contracting parties. While Iceland, Norway and Switzerland have indicated their support for the UK’s accession, the EU’s position is not yet clear. We expect to have some clarity on this by April 2021.1

Most EU member states are likely to enforce foreign judgments even without a specific reciprocal regime, although the type of judgment enforced may be more limited and the procedures may be more cumbersome and more expensive.

There will also be a number of other changes: for example, the English court’s permission will be needed to serve out of the jurisdiction in more cases. However, the English court would also be able to issue anti-suit injunctions in respect of proceedings in EU member state courts in appropriate circumstances, such as where an action has been brought in breach of an exclusive English jurisdiction clause.

The Lugano Convention will then apply as between the UK and the EU member states and the three EFTA states while the Hague Convention applies between the UK and the other Hague Convention contracting states. This would mean that very little would change from the pre-Brexit regime in relation to jurisdiction and enforcement of judgments (albeit that the Lugano Convention does not include some of the improvements made when the Brussels Regulation was “recast”). English court judgments would continue to be readily enforceable throughout the EU and in EFTA countries, and English jurisdiction clauses would largely continue to be respected by those countries, and vice versa. Importantly, the Lugano Convention is not limited to exclusive jurisdiction clauses, so there is more scope for parties confidently to use other types of dispute resolution clause without increasing risk. However, potential claimants should be aware that Lugano will only apply to proceedings commenced once the UK has re-acceded,3 when considering the timing of new claims.

Does Brexit have any implications for arbitration clauses?

In short, no. Arbitration has very intentionally been kept outside the reach of EU law, and because it sits outside EU law, it also means that the whole system of arbitration is unaffected by Brexit.

The agreement to arbitrate is a contractual one, and the interpretation and recognition of that agreement will be a question of each country’s national law (of which there is quite a degree of consistency based on the UNCITRAL Model law) and the New York Convention (to which all EU member states are party). The arbitral process will be governed by the law of the seat of arbitration, alongside party agreement (including institutional arbitral rules where the parties have agreed to apply them), and the discretion of the tribunal. Challenging an arbitral award will be a matter of national law and is usually possible only on very limited grounds. The enforcement of the arbitral award that results from the arbitral process will be governed by national law and the provisions of the New York Convention. Again, there are very limited grounds to refuse enforcement of that award.

So, while Brexit may have a significant impact on many areas of business, it does not have an impact on arbitration as a form of dispute resolution. This makes arbitration a good choice to ensure that the parties’ agreement as to forum is upheld and the outcome of a dispute resolution process can be enforced. Regardless of Brexit, arbitration can have advantages in a cross-border context over litigation, including ease of enforcement, party autonomy and flexibility, limited grounds to challenge or appeal, neutrality and privacy in the arbitral process.

Should I still be using English law to govern my contracts?

Yes. English law remains a sensible, commercial choice. English law has long been a popular choice of substantive law in international contracts, many of which have no nexus with England, the parties or the place of contractual performance. English law is chosen due to the well-developed body of English contract law principles. With only a small number of exceptions (such as consumer and employment contracts), English contract law has developed largely independently of the UK’s membership of the EU and is predominantly unaffected by the body of EU law. The question of whether English law remains the right choice of substantive law will therefore be subject to the same considerations as it was before Brexit occurred.

The obvious next question is whether a contractual choice of English law would be upheld by EU member state courts. The answer again, is yes. EU courts will continue to apply the Rome I and Rome II Regulations, and these respect the express choice of the law of an EU member state or a third country law (now including the UK) in the majority of circumstances. As a result, EU member state courts should continue to give effect to a contractual choice of English law. It is also worth noting that the UK has adopted the provisions of Rome I and Rome II into its own legislation and will therefore follow the same approach when it comes to a choice of governing law of an EU member state (or any other country).

What does this mean for me practically? What dispute resolution clauses should Iinclude in my contracts going forward?

Understanding the practical implications of the legal framework can be challenging. The chart below summarises the application of the Hague Convention and re-accession to the Lugano Convention to the standard dispute resolution clauses used in most contracts. 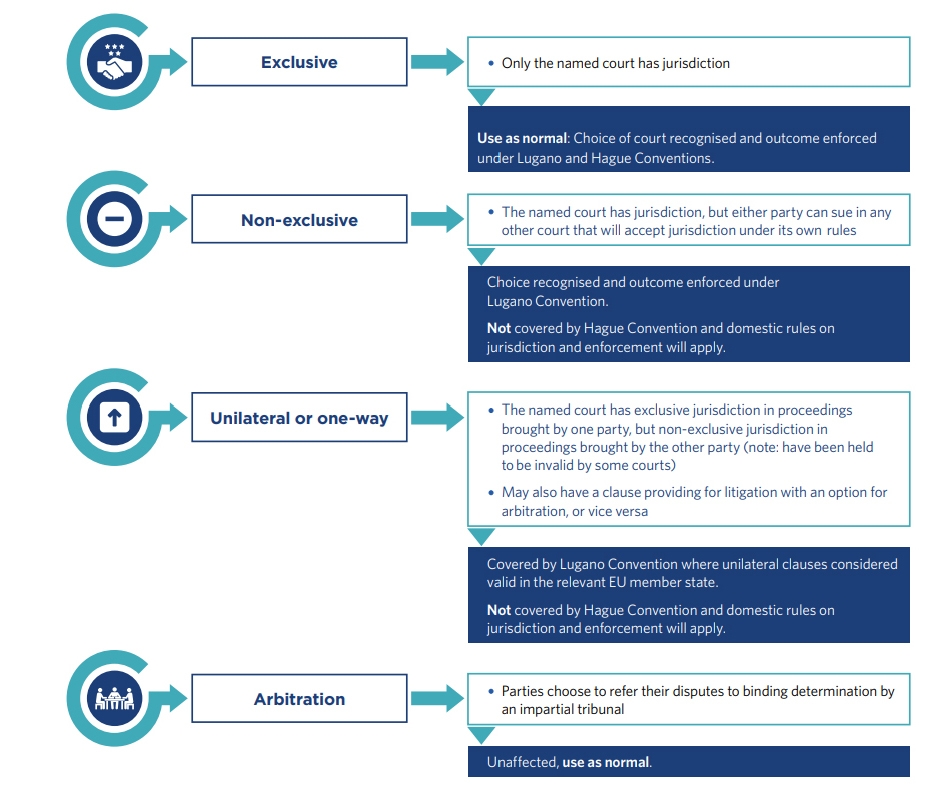 First of all, it is really important to remember that this is an EU/EFTA/UK issue and that the position hasn’t changed for the rest of the world. So if you are a UK company and are contracting with a counterparty in the US with assets in the UK and the US, the position remains as it was before and Brexit doesn’t affect your choices.

Similarly, if you may have to enforce a judgment outside the EU, choosing a dispute resolution clause that would be enforced in the EU but would not produce a judgment that can be enforced elsewhere isn’t advisable. For example, choosing an exclusive English court jurisdiction clause because it definitely fits within the Hague Convention is not a sensible choice if you need to enforce the resulting judgment in a jurisdiction where English court judgments are not enforceable. If you are going to need to enforce in multiple jurisdictions across the world (including within the EU) then the balance shifts towards arbitration being the preferred choice.

The governing law of your contract is also an important factor. Generally (but not always) parties will try to ensure that their jurisdiction clause matches the governing law to make sure that the courts are applying their own domestic law (eg English law, English courts). Where that isn’t possible, they may choose arbitration.

Finally, some contracting parties may not be able to identify where disputes may arise or where they may need to enforce a judgment or arbitral award. In those circumstances, flexibility may trump all other factors and including a unilateral option involving arbitration (either as the default or as the option) may be a sensible choice.

While the legal framework for jurisdiction and enforcement of judgments has changed, its significance is undiminished: the choice of dispute resolution mechanism remains a fundamental part of any contract in order to ensure the enforceability of the parties’ obligations.