High out-of-pocket costs can be a significant barrier to access for Part D enrollees, especially for non-low-income subsidy (LIS) enrollees with a condition that requires an expensive specialty drug for treatment. The 2019 Part D defined standard benefit has a $415 deductible and 25% coinsurance up to an initial coverage limit of $3,820 in total drug costs. For total drug costs above that amount while in the coverage gap, Part D enrollees’ out-of-pocket costs for brands have a coinsurance of 25% and for generic drugs 37%. After non-LIS enrollees reach the True Out-of-Pocket (TrOOP) threshold and enter the catastrophic phase of the Part D benefit, they still incur 5% coinsurance for each prescription, which can be substantial. Unless changed by legislation, CY 2020 enrollees will experience an increase of $1,250 in the annual TrOOP threshold—from $5,100 in 2019 to $6,350 in 2020—since the reduced annual growth rate in the TrOOP threshold as implemented under the Affordable Care Act (ACA) ends. Among the several policy changes being debated as potential ways to reduce out-of-pocket costs in Part D for high-cost enrollees is one that would establish a maximum out-of-pocket (MOOP) cost cap.

This study estimates the number of non-LIS Part D enrollees in 2017 who would be impacted by establishing a MOOP cap, either at the 2017 TrOOP threshold of $4,950 or above, and the out-of-pocket costs averted by the cap. Our analysis uses 2017 Part D prescription drug event data and excludes enrollees in employer group waiver plans, Programs for All-Inclusive Care for the Elderly, demonstrations and medical savings accounts, as well as all enrollees who are either eligible or enrolled for low-income subsidies.

In 2017 there were 37.7 million Part D enrollees in stand-alone prescription drug plans or Medicare Advantage prescription drug plans. Of those enrollees, 24.7 million were not eligible for low-income subsidies (LIS). Among non-LIS enrollees, 790,000 (3.2% of all non-LIS enrollees) had Part D drug out-of-pocket costs that reached the 2017 TrOOP threshold of $4,950, thus entering the catastrophic phase of the Part D benefit.

Out-of-Pocket Costs Above the 2017 TrOOP Threshold

For every simulated MOOP cap, we calculated the total enrollee out-of-pocket costs and other third-party contributions toward those costs that would have been capped by the maximum out-of-pocket limit. As an example, a MOOP cap of $5,000 would reduce out-of-pocket costs by $797 million, or an average of $1,220 per enrollee reaching that cap. Reductions in out-of-pocket costs will need to be financed by some combination of higher payments from the Centers for Medicare & Medicaid Services (CMS), Part D plans, enrollee premiums and manufacturers. Potential changes in prescription drug prices, Part D rebates, premiums and utilization arising from a MOOP cap are not modeled in this study. 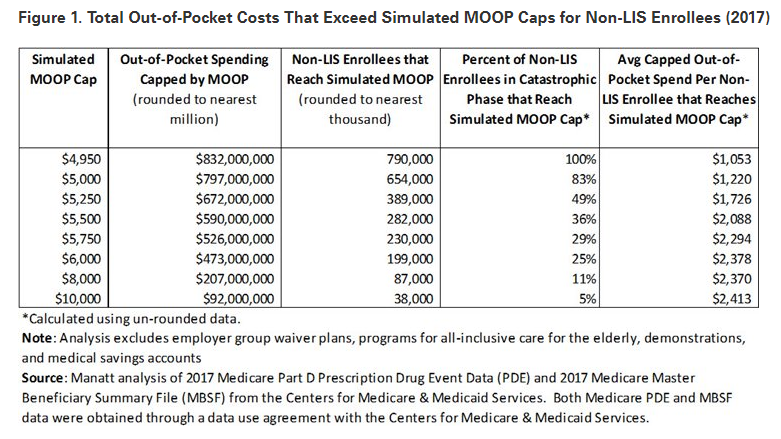 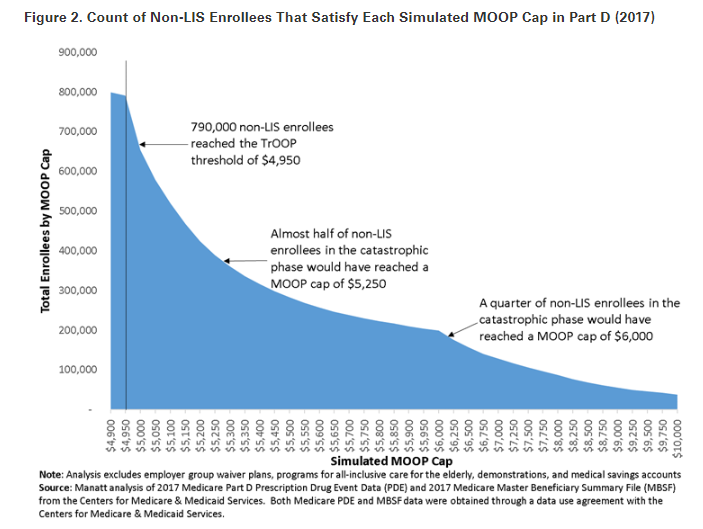 A MOOP cap can provide substantial financial benefit to those high-cost enrollees with very high out-of-pocket costs. Depending on where the MOOP cap is set, it will affect enrollees differentially depending on their disease conditions and drug regimens. These benefits will need to be financed by some combination of premiums, payments from CMS or manufacturer discounts.