This client alert provides a high-level overview of the most notable aspects of the Proposal, including how it compares to the Federal Reserve’s current control regime. Following the overview, we describe our key takeaways from the Proposal.

Summary of Notable Elements of the Proposal

The central element of the Proposal is a set of tiered presumptions for determining when an equity investment by one company in a class of voting securities of another company, in combination with other factors, would be presumed to result in control or non-control of the second company. These tiers — which are less than 5%, between 5% and 9.99%, between 10% and 14.99%, and between 15% and 24.99% — formalize the longstanding general view of the Federal Reserve that as the amount of voting securities that a company holds of a second company increases, the extent of relationships between the two companies that can exist without control decreases. The following chart, which the Federal Reserve included as an appendix to the Proposal, summarizes these presumptions: 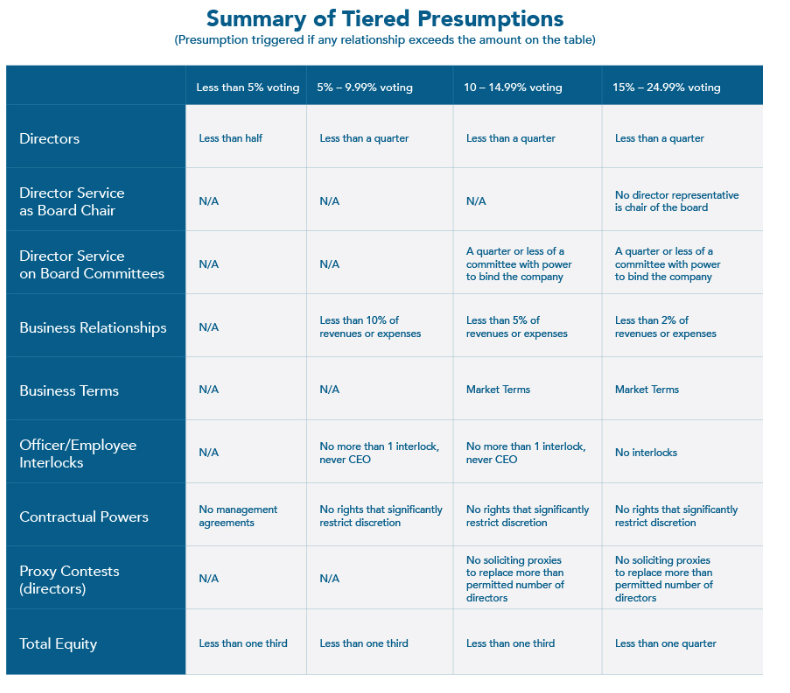 According to the Federal Reserve, this inverse relationship is a logical outgrowth of the framework established in the BHCA and the HOLA. The Proposal states that “where a company’s voting ownership percentage falls within [the] range [from 0% to 25%] is one of the most salient considerations for determining whether the first company controls the second company.”  Nevertheless, it is important to remember that these are only regulatory presumptions. The Federal Reserve has expressly reserved the authority to make control determinations that do not accord with the presumptions, based on the facts and circumstances of a particular investment or relationship.

The Proposal liberalizes Federal Reserve policy in the area of director representation. Under existing precedent, the Federal Reserve generally has not permitted a non-controlling investor with 10% or more of a class of voting securities to control more than one seat on another company’s board except where there is a larger shareholder in the other company. In such a situation, a non-controlling investor may control a maximum of two seats, and generally only in proportion to its overall voting stake.

A director representative of a company may serve as chair of the board of a second company without triggering a presumption of control if the first company controls less than 15% of any class of voting securities of the second.

Total Equity Determination (Size of Holdings and How to Calculate)

The Proposal codifies much of the existing guidance relating to total equity determinations and provides a prescriptive formula for calculating total equity. Existing Federal Reserve guidance generally permits a company to control less than one-third of the total equity of another company without being deemed to control that second company, provided that the first company controls less than 15% of any class of voting securities of the second. If a company controls 15% or more of a class of voting securities, the company’s total equity holdings in the second company need to be less than 25%. Further, under existing policy, a company would generally be deemed to control any securities in a second company that the first either has a contractual right to acquire now or in the future or which the first company would automatically acquire upon the occurrence of a future event.

The Proposal largely codifies this guidance into a formal presumption. Under the Proposal, the control presumptions relating to the amount of total equity a company may control in a second company remain the same. To calculate a company’s total equity holdings in another company, the first company is, consistent with Federal Reserve precedent, generally expected to include in its total holdings the maximum amount of securities that the company could control upon the exercise or conversion of any options, warrants or convertible instruments that the company controls, presuming that no other party elected to exercise its rights (except where such rights must be exercised by all holders simultaneously). The Proposal also includes a prescriptive formula for calculating total equity, which is linked to the equity calculations made under U.S. generally accepted accounting principles (GAAP). This is the first public guidance from the Federal Reserve on this point and will need to be carefully evaluated in the context of analyzing control, especially for early-stage or other small companies that have small balance sheets.

First, it is important to note the significant impact that the Proposal would have if adopted. As the BHCA definition of control is used in a variety of banking contexts — including, for example, the Volcker Rule — the Proposal would have a widespread effect on banking regulation. Institutions subject to the Federal Reserve’s control rules would need to carefully evaluate whether any aspects of the Proposal would, if adopted, require them to change positions they have previously taken regarding control in many contexts.

Finally, the presumptions relating to board representation and proxy contests provide more flexibility to activist investors, and may result in more proxy activity. As a general matter, this may lead banks, BHCs, and SLHCs to take defensive measures, whether in the form of preemptive market actions or through formal changes to corporate policy or governance documents. More specifically, the difference between treatment of proxy solicitations for the election of directors and those for changing corporate policies more generally may result in activists’ attempting to take control of a limited number of board seats, and using proxy contests over corporate policy to produce the changes the investor seeks to make.