Last week, the Senate confirmed Eugene Scalia as the new Secretary of Labor, replacing Alexander Acosta. Acosta resigned in July because of his role in a Jeffrey Epstein federal plea deal. Eugene Scalia is the son of Antonin Scalia, the late Supreme Court Justice. He has been a partner in a large corporate defense firm. He served Solicitor General for the U.S. Department of Labor in the late 2000s during President George W. Bush's administration. The confirmation vote for Mr. Scalia was 53-44. No Democrats voted for him

Beginning on January 1, 2020, employers must pay certain employees higher minimum salaries to keep them within a “white collar” or “highly compensated employee” (HCE) exemption to the federal overtime pay requirement. Below, you'll find a chart comparing the current status of the law to the new Final Rule

To Qualify for White Collar Exemption 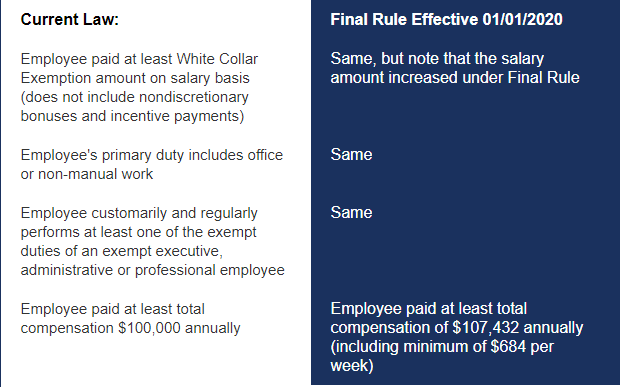 Under the new Final Rule, employers will be permitted to use nondiscretionary compensation (e.g. bonuses and commissions) to satisfy up to 10% of the White Collar Exemption salary level, which can be paid on an annual or more frequent basis. Employers will also be permitted to make one “catch-up” payment within one pay period after the end of each 52-week period to bring the employee’s compensation up to the required salary level. This “catch-up” payment may equal up to 10% of the required salary level. The new law does not automatically update the minimum required salary levels, but the Department of Labor (DOL) anticipates updating the salary levels every four years through the regular notice-and-comment rulemaking.