The following image is from BOEM's pre-publication Final Notice of Sale. 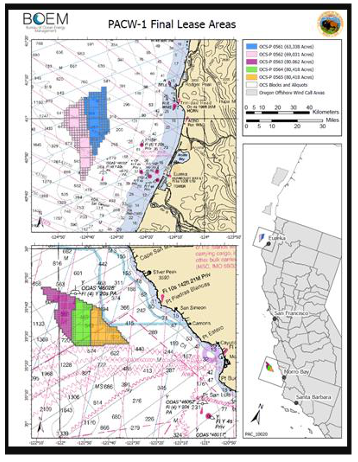 In a press release, BOEM stated that the five California OCS lease areas "total approximately 373,268 acres with the potential to produce over 4.5 GW of offshore wind energy, power more than 1.5 million homes, and support thousands of new jobs."

To date, the U.S. offshore wind farms have focused on fixed monopile foundations. There are several U.S. Customs and Border Protection ("CBP") decisions that address whether Jones Act qualified vessels are required to perform certain aspects of these projects. Depending on the installation method, it remains to be seen how CBP will apply prior wind energy rulings to floating offshore wind. From both a technological and legal point of view, the development of floating offshore wind presents interesting technical challenges and legal issues, that interested stakeholders will have to consider.