Beware! A Trademark Trial and Appeals Board Decision Can Stop You in Your Tracks

It has been a few years since the Supreme Court decision in the case B&B Hardware, Inc. v. Hargis Industries, Inc., and we are beginning to see the aftermath in the district courts. In B&B Hardware, the Supreme Court held that decisions of the Trademark Trial and Appeal Board (“TTAB”) regarding whether a trademark should be entitled to federal registration can have a preclusive effect in trademark infringement actions in district court. Specifically, the Supreme Court held that “[s]o long as the other ordinary elements of issue preclusion are met, when the usages adjudicated by the TTAB are materially the same as those before the district court, issue preclusion should apply.” See B&B Hardware, Inc. v. Hargis Industries, Inc., 135 S. Ct. 1293, 1310 (2015).

The B&B Hardware decision has spurred a lot of discussion. In determining whether a mark is entitled to federal registration, the TTAB typically analyzes the likelihood of confusion by reviewing the marks, the goods, and the channels of trade as set forth in the federal applications or registrations. In contrast, in a trademark infringement action, a court determines the likelihood of confusion by analyzing the plaintiff’s and defendant’s actual use in commerce. The descriptions of the mark and the goods or services listed in a trademark application or registration are not always aligned with the actual use of the trademark in the marketplace. So, when will the usages adjudicated by the TTAB be materially the same as the usages before the district court?

On December 11, 2017, the Southern District of New York issued a decision in the case Cesari S.R.L. v. Peju Province Winery, which sheds some light on when the usages adjudicated by the TTAB are materially the same as those before the district court. Many years prior to filing the lawsuit, in 2001, Cesari filed an application to register the mark LIANO for “wines”, and the registration issued in January 2003. An image of Cesari’s label for its LIANO wine is shown below:

In 2002, Peju Province began producing wine under the mark LIANA and in February 2003, Peju filed an application to register the LIANA mark for “wine.” In October 2003, Cesari filed an opposition before the TTAB against Peju’s application. In July 2004, the TTAB granted summary judgment in favor of Cesari and found that the LIANA mark for “wine” as identified in Peju’s application was likely to cause confusion with Cesari’s previously registered LIANO mark for “wine.” Thus, Peju was not entitled to a federal registration for its LIANA mark. Peju did not appeal the TTAB’s decision. However, Peju continued to use the LIANA mark. An image of Peju’s wine label for its LIANA wine is shown below: 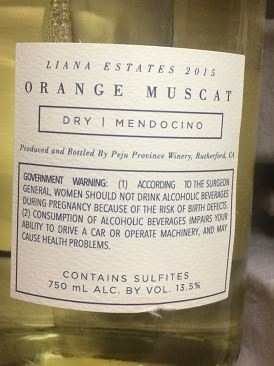 In February 2017, Cesari filed an action for trademark infringement in the Southern District of New York against Peju and its affiliates based on Peju’s use of the LIANA mark. Cesari then moved for summary judgment on likelihood of confusion, arguing that Peju was barred from re-litigating the issue of likelihood of confusion based on the TTAB’s 2004 decision refusing Peju’s trademark application. Issue preclusion applies when: (1) the issues in both proceedings are identical, (2) the issues in the prior proceeding were actually litigated and actually decided, (3) there was a full and fair opportunity for litigation in the prior proceeding, and (4) the issues previously litigated were necessary to support a valid and final judgment on the merits. As to the first prong, whether the issues before the TTAB and the district court were identical, the Court looked to the B&B Hardware decision which states “[i]f a mark owner uses its mark in ways that are materially the same as the usages included in its registration application, then the TTAB is deciding the same likelihood of confusion issue as a district court in infringement litigation.” B&B Hardware, 135 S. Ct. at 1308.

Peju argued that its usage of the LIANA mark is materially different from the usage adjudicated by the TTAB in 2004 because the TTAB only considered use of the LIANA mark in connection with the general category of goods, i.e. wine. Specifically, in the opposition proceeding, the TTAB rejected Peju Province’s attempt to distinguish the parties’ wines based on the fact that Cesari’s wine was an Italian red Sangiovese/Cabarnet Sauvignon and Peju’s wine was a Napa Valley Chardonnay dessert wine. In the litigation, Peju also asserted that its wine is from grapes grown in Northern California, purchased by sophisticated customers, priced between $40 to $60 per bottle and sold on specific websites and at specific wineries. The Court dismissed these arguments and found that the usage considered by the TTAB, namely use of the LIANA mark for wine, encompassed the narrower usages asserted by Peju in the litigation, and thus Cesari and Peju use their marks in materially the same way as the usages adjudicated by the TTAB.

This case serves as a cautionary tale for parties involved in TTAB proceedings, or who are considering initiating a TTAB proceeding. In light of the B&B Hardware decision, proceedings before the TTAB need to be carefully litigated because they could have a preclusive effect in an infringement action. The preclusive effect of a TTAB decision can be especially problematic in an industry such as the fashion industry, where the description of goods in a trademark application or registration may not be aligned with the actual marketplace use, or may be much broader than the actual marketplace use. In the fashion industry there is a wide spectrum of clothing, shoes, and handbags sold in the marketplace. For example, a Nike sneaker is very different than a Manolo Blahnik stiletto, and yet both are “footwear.” Thus, the identification of the mark and goods or services in the federal application or registration may not be a good indication of whether there will be confusion in the marketplace. Nevertheless, a TTAB decision could have a preclusive effect because the identification of goods is broad enough to cover the narrower actual use.

It is always a good idea to carefully consider the best venue for bringing an action against the use and registration of a trademark. One should not file an action in the TTAB without first evaluating the advantages of filing in district court. An analysis of the best arguments for finding confusion, and the best defenses against those arguments, may lead you to conclude that one forum is more favorable for your action because of its particular process for fact gathering and adjudicating disputes.