When is a ship a ship?

The identification of an object as a ship or otherwise may seem like an obvious point, but the implications can be substantial from a legal perspective. If an object is identified as a ship or a vessel then it will be subject maritime laws and regulations, which cover topics as varied as arrest, limitation of liability, marine insurance, collision liability, mortgages and ship registration. Alternatively, if something is identified purely as a floating object, then different regulations will apply.

So when is a ship a ship? For over 100 years under English law, the position was fairly straightforward because the range of craft was less varied; a “Vessel” was conceptually considered to be,

This was changed in the Merchant Shipping Act of 1995 when the definition of a ship was expanded in s. 313(1) to include “every description of vessel used in navigation”.

Since then English case law has been able to build upon these statutory starting points but the object’s use in navigation and its’ physical appearance remain key. We include a summary of the present position under English law for different types of objects in our quick reference table below.

In the UAE where floating objects are often bound only by the limits of the owner’s imagination, the statutory law has not kept up. The UAE is a civil law jurisdiction with laws that are codified, and the UAE Maritime Law (Federal law No. 26 of 1981), now 37 years old, has not been updated to reflect the changes in the industry.

So when is a ship a ship in the UAE? Article 11 of the UAE Maritime Law states that,

“1. A vessel shall mean any structure normally operating, or made for the purpose of operating, in navigation by sea, without regard to its power, tonnage, or the purpose for which it sails.

2. In applying the provisions of the Law, hovercraft used for commercial or non-commercial purposes shall be deemed to be ships.

3. All appurtenances of the ship necessary for the operation thereof shall be deemed to be part of the ship and of the same nature.”

In practice, the key criterion that we have seen applied by the UAE courts is whether the vessel is self-propelled or not. This is important to remember since non self-propelled objects such as certain rigs or dumb barges have the ability to be registered with a ship registry. Such ability of itself will not carry any weight before the UAE Courts. This has been addressed in the judgments of the UAE Courts of Cassation.

By contrast with the UAE Maritime Law, under the mutual GCC Rules and Regulations for Seaports first issued in 1985, a “vessel” shall include,

“… any watercraft liable to move, steer and do normal navigation as usual..”

Such a definition could be relevant for the purpose of a vessel’s operation within ports. i.e. when considering the application of permits, tariffs or charges. However for all other types of disputes, the legal definition in the national UAE Maritime Law or as decided by the UAE Courts of Cassation is likely to take precedence over the mutual GCC Rules and Regulations for Seaports. 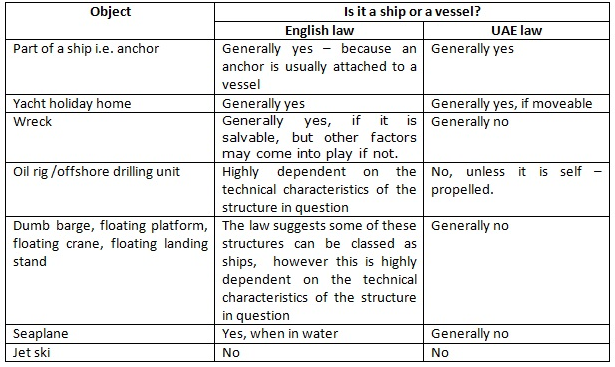