In oil and gas, reserves are companies’ lifeblood. So, when the World Petroleum Council (WPC) partnered with the Boston Consulting Group (BCG) on a recent report promoting gender balance in the sector and called it “Untapped Reserves,” their meaning was clear: to the extent that oil and gas companies perpetuate the industry’s historic under-representation of women, they are failing to fully leverage a sizable and critical pool of talent.

In Canada to date, actions to address this concern have come mainly from the sector’s larger players, such as Suncor Energy Inc. But recent examples like that of PrairieSky Royalty Ltd. suggest the initiatives might be spreading. Earlier this year, five-year-old PrairieSky — whose total company workforce is 75% female — adopted a board diversity policy that includes an “aspirational” target of women making up at least 25% of its board by 2022. Then, within months, it added a second woman to its seven-member board and met its goal ahead of schedule.

Calfrac Well Services Ltd., a leading service firm in the industry (based in Calgary, as are PrairieSky and Suncor), is similarly inclined. It engages a third-party search firm to lead its director section process and instructs it to include gender diversity as one of the criteria for assessing candidates. At this point, however, the company’s current seven-member board of directors is all male. Specific circumstances aside, the situation perhaps underscores a key point in the WPC-BCG “Untapped Reserves” report — that when women are long under-represented in a sector, the pool of highly qualified female candidates to recruit from is restricted. And righting such an imbalance takes time.

The disparity in male and female representation in oil and gas isn’t restricted to boards or senior executive positions. Overall, women currently make up only about 22% of the Canadian oil and gas workforce — a figure little changed in more than a decade — according to a 2018 report by PetroLMI (a division of the non-profit industry association Energy Safety Canada). In 2006, the same report notes, it stood at 21%.

Nor is this an issue unique to Canada. The WPC-BCG study examined all major economies and found no statistically significant differences — attributing that to an industry culture that is “global in scope and sufficiently strong to override the influence of regional forces.”

Beyond numbers, the distribution of women between different roles is also significant in limiting advancement. For example, PetroLMI found that even today women are predominantly employed in office-based roles (55%). WPC-BCG echoed this finding, pointing to a scarcity of women in technical and field roles, jobs that are critical stepping stones to promotion.

WPC-BCG also lists other obstacles women identify as the main reasons fewer of them make senior management. Those most commonly cited: lack of awareness of opportunities, lack of sponsorship or support from senior leaders, and unfair evaluation and promotion.

In Canada, other hurdles may be stalling increases in women’s representation at the board level. According to the Canadian Board Diversity Council’s latest survey [PDF] of FP500 companies, just 28.9% of mining and oil and gas boards have adopted diversity targets for the number of women directors — fewer than in other sectors.

According to Osler’s 2019 Diversity Disclosure Practices survey of reported disclosures from all TSX-listed firms, women in the oil and gas sector held 13% of all director positions (mid-year 2019 results). This compared to 17% for the TSX as a whole (based on 645 companies reporting), 30% for the highest-ranking sector (utilities and pipelines), and 29.4% for companies on the S&P/TSX 60 (53 reporting). On a per board basis, the number of women directors was 1.44 for TSX-listed companies overall as of mid-year 2019 (based on 657 companies reporting), compared to 1.02 for the oil and gas sector.

Breakdown of number and percentages of women directors in 2019 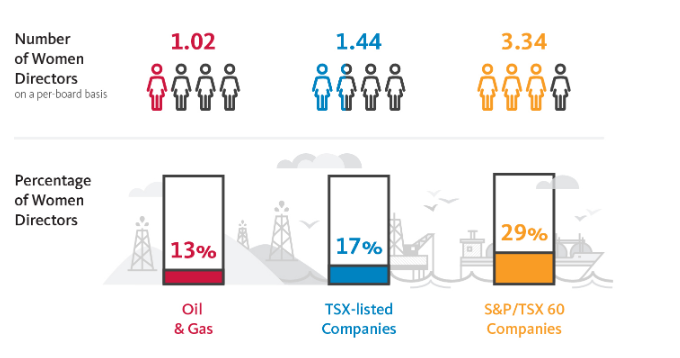 Looking at the C-suite, the percentage of women executives in oil and gas as of mid-year 2019 was 14%, compared to 17% among TSX-listed companies overall (based on 588 companies reporting), 26.3% for the leading sector (real estate), and 18.6% for S&P/TSX 60 companies (50 reporting). The average number of women executives per company in the sector was 0.98.

Breakdown of number and percentages of women executive officers in 2019

Despite being below average, the data does have some positive aspects. In 2015, the first year that Osler compiled this information, women directors held just 6% of board positions in oil and gas, with an average number of 0.54 women per board. Since then, the percentage has more than doubled (to 13%), albeit from a very low starting point. This far exceeds the average overall TSX-listed company gain (to 18.2% from around 12%) in the same period. When it comes to representation of women executive officers, the gains are smaller — up just five percentage points in mid-year 2019 compared to 2015, when it was 9%. Relative to other sectors, however, this increase is more substantial. In 2015, for example, oil and gas ranked last in percentage of women executives across all 11 sectors. As of 2019, it sits on par with mining and ahead of three other industries, although, on a women executives per-company basis, it remains last.

Women directors in the oil and gas sector

Women executive officers in the oil and gas sector

Similar trends, but slightly higher absolute numbers, are present when looking only at mining/oil/gas companies on the FP500 as compiled by the Canadian Board Diversity Council. Their data reveals that the percentage of board positions held by female directors in the mining/oil/gas sector in 2018 was 23.1%, up from 16.1% in 2015. The percentage of women executives in that group in 2018 was 13.2%, up from 11.6% in 2015.

As noted, Suncor is a recognized leader on diversity within the Canadian oil and gas sector. Its nine-member board includes three women and, on the executive side, senior leaders from each business line sit on the company’s Inclusion and Diversity Council. The company’s focus areas include unconscious bias training, consciously promoting culture change through policies that remove systemic barriers, including the use of discriminatory language in internal and external communications, and continued improvements to talent processes to broaden recruitment reach. Its diversity disclosure also includes reporting on its commitment to Indigenous workforce development.

More broadly, the WPC-BCG report identified a list of best practices cited by those surveyed. For mid-career women, respondents felt most strongly that they be offered the same career opportunities as men. In tandem, they also recommended that work-life balance policies be applied equally across all genders. At the executive level, meanwhile, the results stressed the importance of measuring and monitoring women’s progress and broadening the range of career paths from which prospective senior hires are chosen. Survey respondents felt that if these practices were faithfully applied, the percentage of women in the industry overall could grow from 22% (in 2017) to 35% in 2022.

Based on historical precedent, 35% by 2022 might be too optimistic. But, as the PrairieSky and Calfrac examples suggest, doors are opening. In fact, at Halifax-based Corridor Resources Inc., which currently has a six-member, all-male board, they are literally holding the door open. In its 2019 Management Information Circular published this past spring, the company revealed that when a seventh former director announced his decision last year not to stand for re-election, the board chose not to replace him. Instead, it said it would use his retirement as “an opportunity to examine the composition and size of the board with the goal of achieving diversity (including female representation).”