Apple fails to oppose logo for a pear at the EUIPO 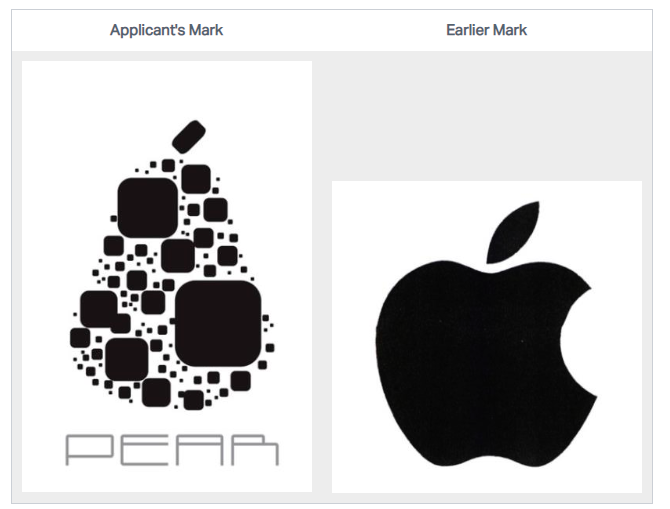 The EU General Court has rejected Apple's case that apples and pears are similar in a case which focused on the wording of Article 8(5) of the EU Trade Marks Regulation 2017/1001 (the "EUTMR").

Both the Opposition Division and the Board of Appeal of the EUIPO upheld the opposition on the basis of Article 8(5) of the EUTMR.

The Board argued that the image of the Pear Logo would be clearly linked to the Apple Logo in the minds of the public as a result of the broad reputation of the earlier mark, along with its particular uniqueness within the industry in question. This creates a risk that the use of the Pear Logo would take unfair advantage of the distinctive character and repute of Apple and the Apple Logo.

The General Court disagreed. The Board of Appeal, they said, were too concerned with Apple's reputation. Despite Apple's undeniable celebrity, a mark's reputation should not be a relevant factor when assessing the similarity of conflicting marks. Whilst reputation may strengthen the mark's protection, this is only the case once similarity has been established between the two marks.

The General Court found that the marks were neither visually nor conceptually similar.

Visually, the Court held the shapes of the figurative elements and the fruits depicted are dissimilar overall. They took into account the following:

The Court also found that there were clear differences between the marks on a conceptual level.The marks depict completely different fruits: an apple and a pear. The mere fact that there is a generic term which, by definition, includes both objects, the word "fruit", is neither relevant nor enough to create a conceptual similarity between the marks. The conflicting marks would ultimately be perceived as different objects.

Therefore the Court annulled the decision of the Board of Appeal as regards the similarity of the marks. It is not enough that that the images share certain similarities as silhouettes, or that both shapes fall under the scope of the term fruit. In fact, in many European languages, these fruits are used in proverbs to demonstrate that two things are so different that they cannot even be compared.

The Court did not consider it necessary to examine the other stages of the test under Article 8(5) EUTMR. It is important to note here that the other questions, concerning the earlier mark's reputation, are irrelevant if the marks are found to be dissimilar.