Davies has submitted a comprehensive comment letter to the Capital Markets Modernization Taskforce (Taskforce) in response to the consultation report published by the Taskforce on July 9, 2020 (Report). The Taskforce was formed by the Ontario government in February 2020 with a mandate to review and modernize Ontario’s capital markets. The Report, which followed consultations with market participants (including Davies), set out several proposals that would, if implemented, represent fundamental changes to Ontario’s securities laws. Although we support some of the proposals in the Report, many others would not be beneficial for Ontario – and some would be disastrous. These “bad” proposals would ultimately have an adverse impact on issuers, investors and other market participants, eroding confidence in Ontario’s capital markets and rendering them less attractive and competitive than other advanced capital markets.

We strongly support initiatives to modernize Ontario’s capital markets and reduce regulatory burden. However, any significant changes to securities regulation should be considered only after thorough cost-benefit analyses and, if pursued, should be implemented on a national rather than a provincial scale to promote harmonization and minimize the growing overlap and fragmentation among corporate and securities laws and stock exchange requirements. Regulators should also be mindful of the importance of aligning Ontario’s rules with those of other advanced capital markets, and particularly the United States, in circumstances where alignment is appropriate.

The Taskforce intends to deliver its final report to the Minister of Finance by the end of 2020.

Some of the more significant (and problematic) proposals outlined in the Report include the following:

Our “report card” below identifies each proposal on which we have provided comments and whether we believe that the proposal would be good or bad for Ontario’s capital markets. For complete details, including our arguments and analysis, please refer to our comment letter. 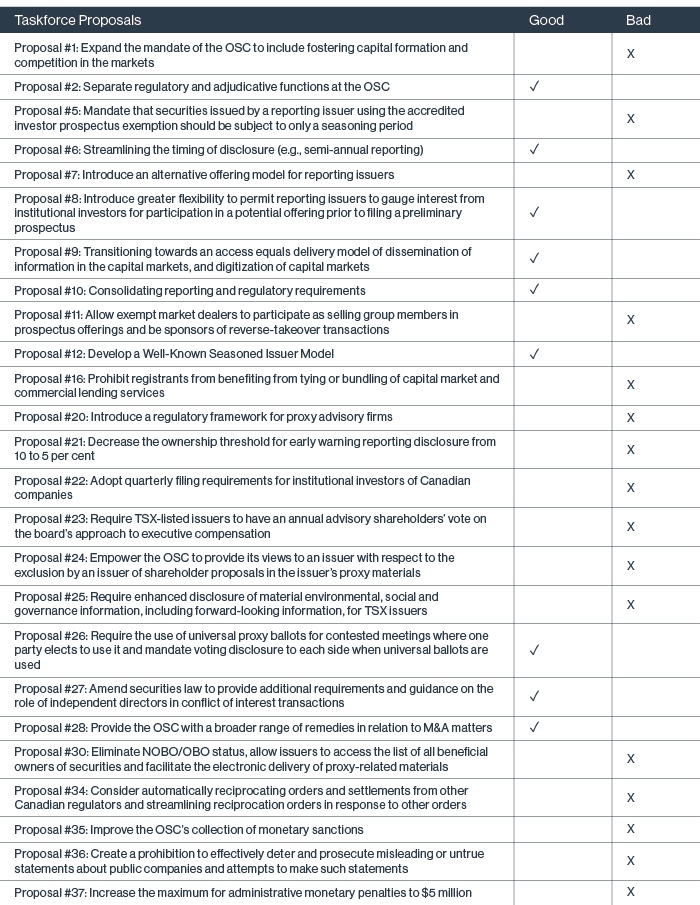