‘Fire and Rehire’ - has the ship sailed?

Fire and rehire, which has long been viewed as a controversial method for employers to detrimentally alter their employees’ terms and conditions, has received particular scrutiny in the recent wake of Covid-19 pandemic where many struggling companies adopted the practice, and more recently the P&O Ferries ‘scandal’ in which close to 800 of its staff were dismissed without prior consultation and replaced with cheaper agency workers. Although in the case of P&O Ferries, the employees and workers in question were dismissed and ultimately not reengaged, with the company instead choosing to engage agency workers rather than the original employees on less favourable terms, the term “fire and rehire” was used extensively in the media to characterise the events. This article explores the practice of termination and reengagement, more commonly referred to as “fire and rehire”.

We will examine what the practice of fire and rehire involves, why it is used, and whether it looks set to be restricted by upcoming legislative changes, or if it is perhaps more likely that in the wake of P&O the court of public opinion will do more to make employers think twice before firing and rehiring employees.

What is it fire and rehire, why is it used?

Fire and rehire is a practice through which an employer, wanting to change the existing terms and conditions of its employees, chooses to implement these changes by dismissing the employee(s) in question and offering to rehire them on the new terms and conditions, which are more likely than not less favourable to the employee. Whilst viewed very negatively both in the press and from an employee-relations perspective, the practice it is not unlawful per se. It is also used as a negotiation tool by some employers, as the threat of fire and rehire alone often provides significant leverage during negotiations with their workforces over terms and conditions.

Fire and rehire is generally seen as a last-resort option for employers who have unsuccessfully attempted to reach a mutual agreement with their employees over proposed changes. Indeed, in November 2021 in response to rising concerns from workforces and unions regarding the use of fire and rehire during the COVID-19 pandemic, the Advisory, Conciliation and Arbitration Service (“ACAS”) published guidance aimed at encouraging employers to avoid fire and rehire practices and instead explore alternative methods of amending terms and conditions (the “ACAS Guidance”), with the Chief Executive of ACAS commenting that “Employers should thoroughly explore all other options first and make every effort to reach agreement with staff on any contract changes”.

Importantly, the ACAS Guidance remains just guidance, and whilst it is good practice for employers to follow the recommendations in the guidance before reaching a decision to fire and rehire (e.g., consulting the affected employees over the proposed changes), there are no legal consequences for failing to follow it.

The benefit of fire and rehire to an employer is that certainty is achieved in the sense that employees who refuse to accept the new terms and conditions under the process are dismissed, and employees who accept the new terms cannot subsequently claim that the changes are invalid. This is potentially more attractive than the other commonly-used method of unilaterally varying terms and conditions which is more of a ‘wait and see’ approach: the employer unilaterally varies the employees’ terms (without a technical dismissal and reengagement on a new contract) and waits to see whether the employees object. If they do not, and continue to work without protest, they may be taken to have impliedly accepted the changes.

What are the legal considerations associated with the practice?

There are two key legal considerations and risks associated with the practice of fire and rehire which, if not adequately factored into any decision making, may exacerbate the issues faced by employers when choosing to follow this route. These considerations are (i) the prospect of unfair dismissal claims; and (ii) consultation and notification requirements.

Both of these issues were particularly widely reported on during the P&O dismissals, where settlement agreements were offered by the company to sacked employees to mitigate against unfair dismissal claims, and P&O’s knowing failure to comply with their collective consultation obligations led to allegations of criminal behaviour from the UK Government. 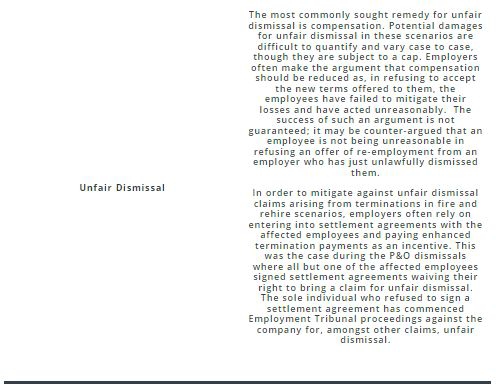 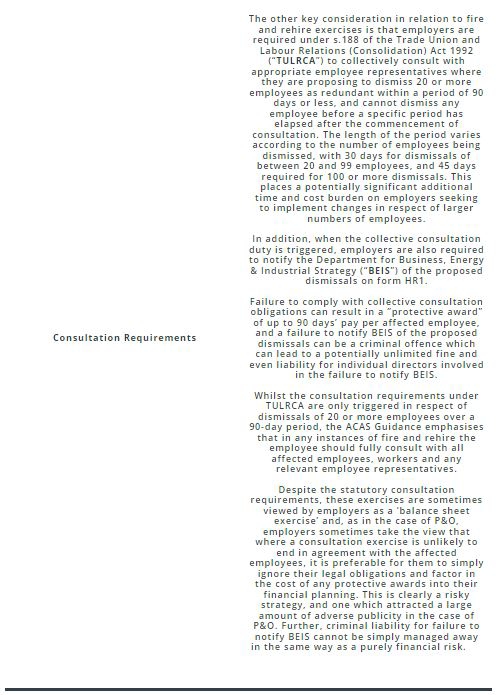 Recent and upcoming legislative efforts to combat fire and rehire

In response to the P&O ‘scandal’, in late March 2022 the UK Government announced plans for a new statutory code to better protect employees from fire and rehire practices. Whilst acknowledging that P&O’s actions did not constitute fire and rehire, but rather dismissal without consultation, the government has echoed the ACAS Guidance and emphasised that fire and rehire should be an option of last resort and that employers “should first have made all reasonable attempts to reach agreement through full consultation”.

The proposed code of practice looks set address the consultation element of fire and rehire, rather than the entire practice itself. Whilst the contents of the proposed code are not yet available, the Government has confirmed that it will lay out practical steps that each employer must follow in respect of fire and rehire, and that courts and tribunals will have the power to apply an uplift of up to 25% of an employee’s compensation if an employer unreasonably fails to comply with the code where it applies. This is a similar mechanism to the ACAS Code on Disciplinary and Grievance Procedures which, if not followed by employers where relevant, can result in a 25% uplift of any award at tribunal.

This is not the first time that there have been legislative efforts to curb the use of fire and rehire. In October 2021, Parliament voted against a Bill which would have placed significantly more stringent restrictions on employers regarding consultation with employees and transparency over the reasons for imposing new contracts. Significantly, the Bill would have imposed a duty to consult where decisions are made to terminate the contracts or substantially change the terms of 15 or more staff, providing the company in question has 50 or more employees. Notably however, the Bill did not seek to outlaw fire and rehire completely, acknowledging that the practice is an important last defence for employers who are struggling financially and have no other way of cutting costs.

Time will tell whether the proposed reforms will go far enough in dissuading employers from the practice of fire and rehire, or encourage those who might otherwise have been tempted to throw caution to the wind to more closely follow the necessary consultation requirements in these exercises. Often, the decision to fire and rehire employees is due to pressing financial considerations and employers take the view that a 90-day protective award per employee is preferable to a 30- or 90-day consultation period during which the employees remain employed on the same terms and conditions; this may not change significantly even where the protective award and any potential unfair dismissal award are subject to a 25% uplift. It was this approach in particular during the P&O case that contributed significantly to the media and public outcry, with P&O admitting it did not carry out the requisite consultation exercise (in their case, a 90 day exercise) as it would have cost them £309m to run the business with the employees on their existing level of pay during a consultation period in which they knew that the trade unions representing the affected employees would not have agreed to their proposals.

Therefore, whilst it remains to be seen what practical effect the upcoming code of practice will have on the use of fire and rehire, it may be the case that the court of public opinion, and the heightened risk of adverse media and public scrutiny that has followed the P&O dismissals, will act as a greater deterrent for employers than any legal constraints they may face.