The State Department’s Directorate of Defense Trade Controls (“DDTC”) published an interim final rule on December 26, 2019, bringing the International Traffic in Arms Regulations’ (“ITAR”) treatment of encrypted electronic transmissions, such as cloud computing solutions, in line with the Export Administration Regulations (“EAR”). The interim final rule becomes effective on March 25, 2020, and interested parties have until January 27, 2020 to file additional comments with the DDTC. Implementation of this new rule should reduce the export licensing burden for companies dealing with ITAR-controlled technical data, as well as reduce compliance costs by allowing those companies to use global cloud solutions currently available for data controlled under the EAR.

The interim final rule creates a new definition of “activities that are not exports, reexports, retransfers, or temporary imports” in § 120.54 of the ITAR to exclude certain transactions from the ITAR’s licensing authority. Upon implementation, the electronic transmission and storage of secured unclassified technical data outside of the U.S. will no longer be considered an “export” subject to ITAR requirements. Prior to the implementation of this rule, the storage or transmission of ITAR-controlled technical data in or through a foreign country required ITAR authorization, or use of cloud solutions that employed only U.S. servers and network infrastructure. That requirement, which deviated from the EAR practice adopted in 2016, imposed a significant compliance burden on multinational companies with globally diversified IT networks as well as companies looking to migrate their data to a cloud solution.

With the new rule, companies will no longer be required to seek ITAR authorizations for the transmission of unclassified ITAR technical data through networks and servers outside of the U.S. However, intentionally sending encrypted data to or storing it in arms embargoed countries still would be restricted. The new definition of transactions not subject to the ITAR’s controls on exports is identical to the EAR provision found in § 734.18. A summary of the requirements is in the chart below. 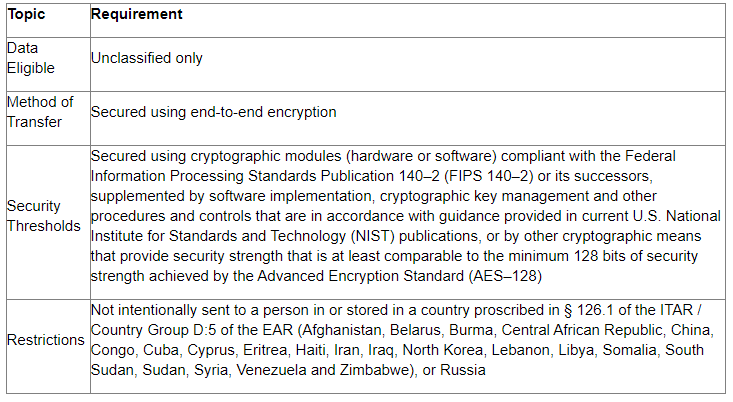 In addition to excluding encrypted technology transfers from the ITAR licensing authority, the new rule also mirrors the EAR’s rule in other respects. The following activities are not subject to either of the ITAR’s or EAR’s export licensing requirements:

The interim rule also clarifies that providing a foreign person with the ability to decrypt encrypted ITAR data (such as that stored on a cloud) constitutes a release of that data that requires authorization. DDTC’s commentary clarifies that provision of “access information” (a new term) is not itself an export transaction subject to the ITAR licensing requirements. However, companies need to consider how the use of access information could fall within the amended definition of “release.”

This revised definition makes providing access information to a foreign person a release of the underlying technical data (and therefore an ITAR licensable transaction) if the access information can cause or enable access to unencrypted technical data. This definition does not require actual access, viewing or possession of the unencrypted technical data, which contrasts with DDTC’s regulatory revision in 2016 that made clear that a “release” requires actual access. Companies can consider utilizing the comment period to address this theoretical access concern and should closely monitor this definition to ensure their programs are structured to avoid theoretical access through making decryption means available to users outside the United States.