Will we win? The odds of success in restraint of trade cases
Blog Workplace Law & Strategy Blog

When an ex-employee goes to a competitor or starts poaching clients or staff, employers often look to a restraint of trade clause to protect key business assets such as client relationships or company confidential information.

Often a quick decision needs to be made: apply to the Court to stop the ex-employee, or wait and sue for breach of contract damages at some later time. Wrapped up in this decision is the important issue of prospects of success – an employer will want to know there is a good chance of a successful outcome.

Whilst there is a general perception that restraints of trade are difficult to enforce (some lawyers even hold the blanket view that they are never enforceable) the only empirical study of Australian court judgments (Chia and Ramsay, 2016), which looked at all restraint of trade cases that went to final court determination in the period 1989 to 2012, found that the outcome across all cases in Australia in that period was: 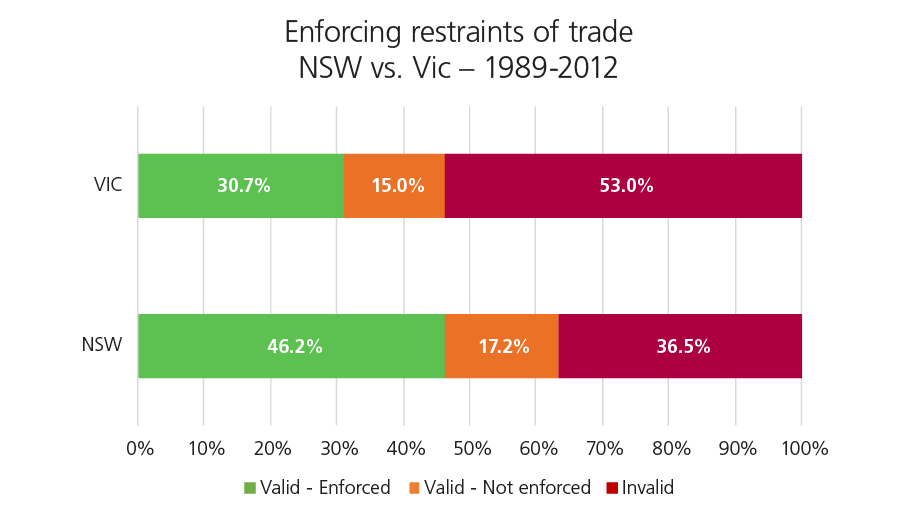 Enforcement of restraints of trade in New South Wales and Victoria

There are at least a couple of reasons why NSW has a higher enforcement rate than Victoria. First, there is specific legislation in place that empowers a court to construe and read down a restraint that is excessive to reduce its operation to that of a reasonable protection, so long as that protection is within the confines of the restraint agreed between the parties. There is some qualitative evidence (Arup et al., 2013) to suggest that NSW is being nominated as the jurisdiction governing the contract to take advantage of this legislation. Second, NSW is a bigger State than Victoria with more employees, and the financial services and insurance industries, which are over-represented in restraint cases, are larger in NSW and hence generate more litigation.

I suspect these numbers – Australia wide and State by State – show odds of success that are much higher than is the general perception. These aggregate numbers also leave out successful settlement negotiations prior to trial – it is not uncommon to agree a fresh restraint by consent, or some other compromise, rather than proceeding to final hearing.

The best decisions, including whether to start a legal action or not, are made by combining human expertise, experience and instinct, and objective data. The human experience allows us to weigh complex trade-offs and risks in pursuit of an objective. The objective data helps us to make decisions free of biases, many of which are subconscious.

Of course, every case is different and success in any individual matter has many essential ingredients. This aggregate data is useful in that it shows that an ex-employee’s restraint can be an effective tool to protect business assets. It is always a matter of ensuring that the essential ingredients, covered in other blog posts are present.