This month, we’re going to look at a visualization that uses network techniques. Visualizing a network is a matter of nodes and edges. If the network were Facebook, the nodes would be people, and the edges would be the relationships between those people. Instead of people, we are going to look at specific device functionalities as defined by the product codes. And instead of relationships, we are going to look at when device functionalities (i.e., product codes) are used together in a marketed device as evidenced by a 510(k) submission.

In the chart below, we limit ourselves to the example of cardiology devices. We could similarly produce a chart for any therapeutic device category. In addition to identifying the device functionalities that are used with each other, the chart measures two things:

This is an interactive chart where you can hover your cursor over a particular node and read the name of the node. 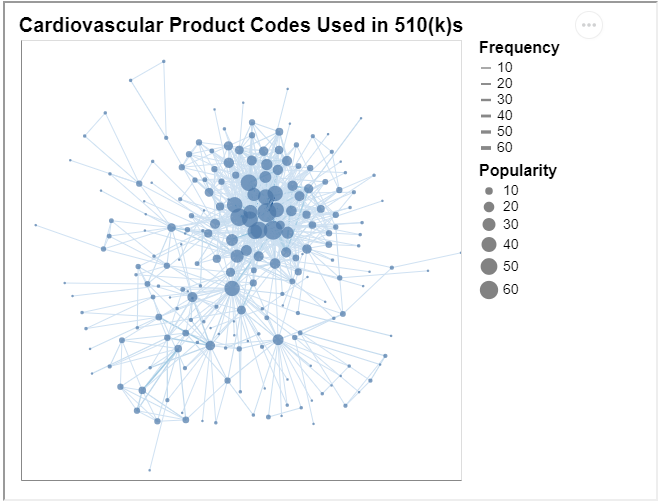 We looked at submissions over a more than 20 year period of time, between 2000 and October 2021. We used software to read every 510(k) summary on FDA’s website during that time. We pulled out of those summaries every mention of a product code. Then we produced a list of every combination of two product codes (i.e., two product codes used in the same 510(k)). Finally, we aggregated these instances for the 20 year period, counting the number of times any two product codes were used together.

A chart such as this can be useful both in what it shows, and what it doesn’t show. From a research standpoint, this shows where a lot of the historical emphasis has been in product development. In other words, this illustrates the focus on product development with regard to combining device functionalities to achieve some overall clinical objective. Indeed, the chart could also give inspiration to product development as it illustrates areas where maybe a product team could add functionality to what it already has that would be clinically useful.

From a marketing perspective, this also could be used to identify white space, or areas where product development hasn’t focused. Of course, there could be good reasons for that, in the sense that some combinations of device functionalities would simply make no sense or produce no value. But it could also stimulate thinking about areas that simply haven’t been explored as vigorously.