In light of the recent Brexit developments in the UK a no-deal Brexit is increasingly looking like a possibility. This will have very significant implications for parties involved in M&A transactions. This is because, without a deal, the EU merger control regime will immediately cease to apply in the UK. Transactions can therefore be caught immediately by the UK regime even where they have been notified in Brussels.

Indeed, the UK Government has published a draft Statutory Instrument (SI) amending existing competition and merger control legislation in order to ensure the legislation is suitable after Brexit in the case of a “no deal” scenario. In addition the CMA has published guidance on its role in merger control after Brexit, with particular focus on the transitional arrangements and allocation of jurisdiction for transactions that straddle pre- and post-Brexit. For ‘live’ transactions, which are notified under the EUMR before Brexit but for which a decision has not been adopted on exit day, the UK aspects of the transaction will come under the CMA’s jurisdiction (provided the transaction meets the jurisdictional thresholds of the Enterprise Act). Merging parties are advised to contact the CMA at an early stage where they anticipate this may be the case, in particular where the transaction may raise potential competition concerns in the UK. The CMA may suggest to the merging parties that they should start pre-notification discussions with the CMA. New transactions notified after Brexit may face parallel investigations under both the EUMR and the UK merger regime if they meet the jurisdictional thresholds under both regimes. This should be factored into the deal timetable and may need to be reflected in the conditions precedent.

Brexit and merger control in the UK

Once the UK leaves the EU, the EU Merger Regulation (EUMR) with its on-stop-shop regime under which (subject to some exceptions) a transaction that qualifies under the EUMR cannot be subject to the national merger control regimes of the Member States, will no longer be applicable in the UK. Instead the EU and UK merger control regimes will run in parallel and a transaction that qualifies under the EUMR may also be subject to UK merger control (provided the jurisdictional threshold for UK merger control is met). The CMA has estimated that this will lead to an increase in the number of UK merger investigations by up to 40%. UK turnover will no longer be taken into account when calculating whether turnover thresholds of the EUMR are met, which in turn will result in fewer transactions qualifying under the EUMR. The Commission has indicated that it expects a reduction of up to 15% in EUMR filings as a result of the UK leaving the EU.

The UK is currently due to leave the EU on 29th March this year, either on the terms set out in the Withdrawal Agreement if both the UK and the EU approve the agreement in time for it to take effect on 29 March 2019, or without a deal.

The Withdrawal Agreement provides for a transition period until the end of December 2020 during which the status quo in relation to the application of EU law will be maintained. The UK will no longer be a Member State but EU legislation will remain applicable to and in the UK. Article 127(6) of the Withdrawal Agreement expressly provides that any reference to Member State in EU legislation applicable in the UK during the transition period must be read as including the UK. The transition period could be extended by a maximum of two years, so could potentially run until December 2022.

Last October the UK Government published a draft SI amending the Enterprise Act 2002 and the Competition Act 1998, where necessary, in order to make the legislation suitable in a no-deal Brexit scenario. The EUMR will be revoked on exit day and any references to the EUMR regime and its interaction with the UK merger regime will be removed, in order to clearly separate the two merger control regimes.

For merger cases which have been notified or referred to the Commission under the EUMR but on which a decision has not yet been reached on exit day, the UK aspects of the transaction will come under the CMA’s jurisdiction immediately following Brexit day (provided the transaction meets the jurisdictional thresholds of the Enterprise Act). The same will apply for transactions where a decision is annulled by the European Courts after Brexit and provisions are made in the legislation to make sure that the CMA will not be time barred from investigating the merger in such a case. Removing the UK aspects (and therefore the UK turnover) from these merger cases could bring them below the EUMR thresholds and jurisdiction could therefore move from the Commission to the Member States. The Commission has so far not indicated how it intends to address this issue. It is likely to argue that jurisdiction is determined on the day the agreement was signed or day of notification whichever is earlier in line with its Consolidated Jurisdictional Notice.

The CMA has published guidance on its role in merger control after Brexit, and it advises merging parties to contact the CMA at an early stage where they anticipate that such a scenario is possible, in particular where the transaction may raise potential competition concerns in the UK. The CMA may suggest to the merging parties that they should start pre-notification discussions with the CMA.

The CMA will continue to monitor non-notified cases, including those falling under the jurisdiction of the Commission but over which the UK may obtain jurisdiction over the UK aspects of the transaction after exit day.

New transactions notified after Brexit may face parallel investigations under both the EUMR and the UK merger regime if they meet the jurisdictional thresholds under both regimes. This should be factored into the deal timetable and may need to be reflected in the conditions precedent. 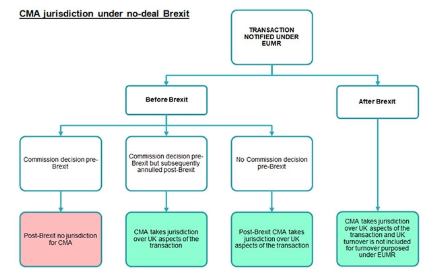