On 16 August 2019, the International Centre for Settlement of Investment Disputes (the “ICSID”) Secretariat published its third working paper on proposals for amendment of the ICSID Rules (Working Paper #3).

In addition to many other changes, the proposed amended Rules provide, for the first time, guidance and clarity to tribunals on security for costs orders with the addition of Rule 52.

In theory, it is broadly accepted that tribunals’ jurisdiction to order security for costs is implied under the applicable arbitral rules, including under the ICSID, UNCITRAL and International Chamber of Commerce (“ICC”) Rules. In practice, however, tribunals have been reluctant to order security for costs, applying a high threshold to the circumstances that would warrant such an order. Some tribunals have even gone so far as to hold that security for costs cannot be ordered as a provisional measure in investment treaty arbitration because there is no right to cost reimbursement at this stage of the proceedings.

In this new version of the proposed amendments, the ICSID considered comments received from States and public commentators with respect to the importance of third-party funding in determining whether it is appropriate to order a party asserting a claim or counterclaim to provide security for costs.

The new version of proposed Rule 52 on security for costs reads as follows: 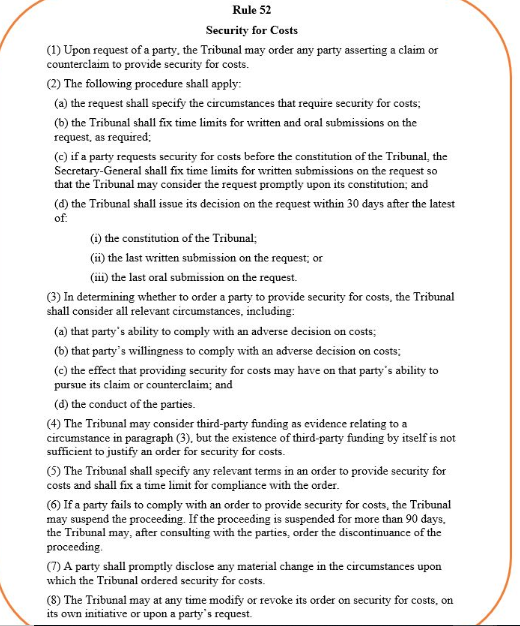 While these proposed amendments provide more guidance for proceedings under the ICSID Rules, there remains inconsistencies between applicable arbitral rules and uncertainty as to the manner in which these rules will be interpreted and applied. To address this issue, States should consider incorporating provisions on security for costs into their investment treaties. For example, the investment chapter of the EU-Viet Nam FTA includes a provision that a tribunal may order an investor to post security for costs “if there is reasonable grounds to believe that the claimant risks not being able to honour a possible decision on costs issued against the claimant”.

Security for costs orders assist to ensure that the public funds that States spend to defend unmeritorious claims will be covered, filter out claims that are speculative or marginal, and protect against investors declaring bankruptcy or absconding from the jurisdiction before satisfying an order for costs made against them.

The ICSID will hold the next in-person consultation with Member States on Working Paper # 3 from 11 -15 November 2019 before the amended rules are placed before the Administrative Council for a vote.