In December 2018, the U.S. Department of Justice (DOJ) released its annual statistics for its civil False Claims Act (FCA) and fraud cases from the fiscal year ending Sept. 30, 2018 (fiscal year 2018). The DOJ reports it recovered $2.8 billion in settlements and judgments for Fiscal Year 2018. Of the $2.8 billion recovered in fiscal year 2018, $2.5 billion involved the healthcare industry—the ninth consecutive year that the DOJ's civil health care fraud settlements and judgments have exceeded $2 billion. However, the total amount recovered is down significantly from last year's total recovery of $3.7 billion, and is the lowest amount recovered since 2009 when the DOJ recovered $2.4 billion. The reason for these decreased numbers is a significant drop in non-health care related recoveries—both at the U.S. Department of Defense (DoD) and other non-health care cases.

As the majority of our readers know, the FCA is used by the U.S. government to combat healthcare fraud and also serves as the primary civil remedy for redressing false claims involving federal government contracts, grants, and federally-funded programs. FCA cases can originate in one of two ways: (1) actions brought by the DOJ, or (2) actions brought by whistleblowers, known as relators, who are entitled to a portion of any proceeds recovered through settlement or judgment. In the latter actions, called qui tam actions, the case is filed under seal and the DOJ is given a period of time to evaluate the allegations and decide whether to intervene (i.e. take over the case). If DOJ declines to intervene, the relator may proceed with the action and potentially receive a greater cut of the recovery. 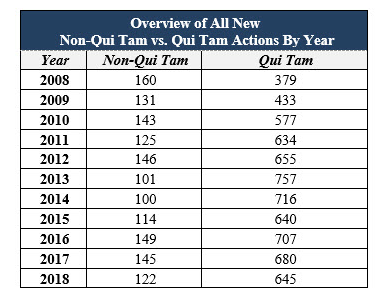 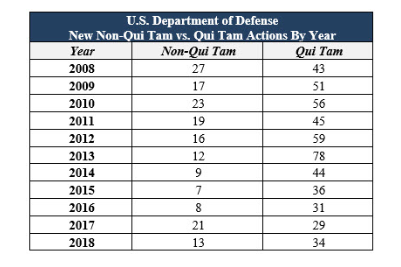 These numbers are in line with the overall downward trend of DoD-related FCA cases over the past decade. 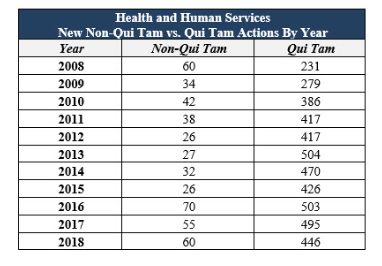 The increase in government-initiated healthcare cases may be attributable to enforcement initiatives such as the nationwide Medicare Strike Force Teams. These teams, which are scattered throughout the United States, focus on criminal and civil health care fraud.

The trend line for government-initiated FCA actions should increase over the next few years. DOJ recently added a cadre of new affirmative civil enforcement attorneys, whose role will include initiating cases under the FCA. The new Assistant United States Attorneys (AUSAs) are being placed throughout the country—and offices where there is a hotbed of government contracting and healthcare are receiving more than one new AUSA. While most U.S. Attorney's Offices will receive one additional AUSA for affirmative civil enforcement, DOJ announced that offices such as Colorado, Middle District of Florida, Southern District of Florida, Massachusetts, New Jersey, Eastern District of New York, Southern District of New York, and Eastern District of Virginia, would receive two. 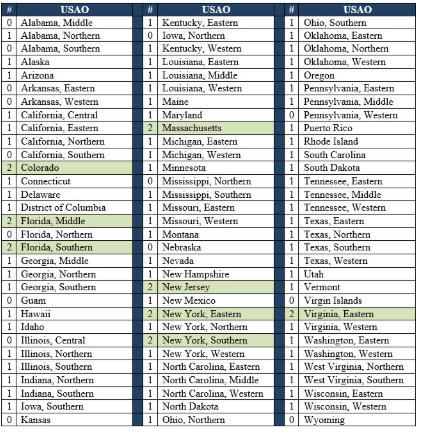 The majority of DOJ's recoveries—over $2.5 billion—came from healthcare cases. This is consistent with the years prior in which healthcare-related cases marked the majority of settlements and judgments.

The remaining amount recovered by the DOJ came from non-HHS and non-DoD cases, which decreased dramatically between fiscal year 2017—$823.4 million—and fiscal year 2018—$259.6 million. About half of the fiscal year 2018 recovery in this category resulted from a single mortgage fraud case for $149.5 million.

Given that FCA claims often take years to litigate, it's important to recognize these decreased numbers in new actions being filed. In fact, analysis of the DOJ's report statistics shows that fiscal year 2018 had the lowest number new cases filed since 2015. However, the ten year low for FCA settlements and judgments, as well as the decreased number of new non-qui tam FCA actions brought in fiscal year 2018, may not be entirely surprising. The decreased number of new non-qui tam actions may be marking a shift in enforcement policy—and is not entirely surprising given the two DOJ memorandum released earlier in fiscal year 2018—referred to colloquially in the industry as the Granston Memo and the Brand Memo. Together with the Escobar decision, Universal Health Services, Inc. v. United States ex rel. Escobar, -- U.S. --, 136 S. Ct. 1989 (2016), in which the Supreme Court emphasized the heightened pleading requirement for establishing materiality under the FCA, there may be more stringent scrutiny of potential FCA actions.