The Case of the [Allegedly] Stolen &
Blog Incontestable Blog

Nadav is a small graphic design business that creates typefaces and logos for high‑end brands such as VOGUE, Estee Lauder, and Volkswagen. In 2012, Nadav allegedly developed the Paris Pro FS typeface, including the “Paris Pro Ampersand:”

, in its online marketing materials. Nadav alleged that Banana Republic copied and used Nadav’s ampersand without obtaining a license or other authorization. 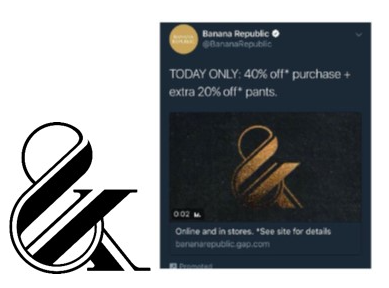 As noted by the court, to survive a motion to dismiss under Federal Rule of Procedure 12(b)(6), a plaintiff must allege facts sufficient to state a facially plausible claim to relief. Applying this standard, the district court dismissed Nadav’s unjust enrichment claim with prejudice and sent Nadav back to the drawing board for its other two claims.

First, the district court addressed Nadav’s claim for unjust enrichment. To state a claim for unjust enrichment under New York law, Nadav must plead that Banana Republic was enriched at Nadav’s expense, and that “equity and good conscience” require Nadav to recover from Banana Republic. Though Nadav asserted that an equitable obligation ran from Banana Republic to Nadav by virtue the alleged misappropriation of the Paris Pro Ampersand, the court found no relationship “whatsoever” between the parties. Nadav’s allegations relating to its design of logos for other players in the fashion industry were too attenuated to demonstrate that the company had any relationship with Banana Republic. If Nadav could succeed on a motion to dismiss without alleging an actual relationship between it and Banana Republic, “then the requirement [for an equitable obligation between the parties] would be rendered meaningless.” For these reasons, Nadav’s unjust enrichment claim failed.

Third, the court addressed Nadav’s claim under Section 349. To state a claim under the statute, a plaintiff must demonstrate that it was injured as a consequence of the defendant’s “materially misleading” “consumer‑oriented conduct.” For non‑consumers such as Nadav to obtain relief, “the gravamen of the complaint must be consumer injury or harm to the public interest.” Nadav’s claim failed because the core of its complaint, according to the district court, “is a dispute between businesses, not harm to consumers” or the public interest. As for potential consumer deception stemming from Banana Republic’s use of a stylized ampersand in its marketing materials (e.g., believing that the Banana Republic ampersand originated from Nadav), the district court held that such deception alone is not a cognizable injury.

Nadav filed its third amended complaint on July 1, 2021. Banana Republic has not yet moved to dismiss.