Will Modern Slavery Legislation Become a Reality in Canada?

With the introduction of Bill S-211 (the proposed "Modern Slavery Act" or the "Bill") in the Senate on February 5, 2020,[1] Canadian legislators are taking a second attempt at passing legislation that addresses the serious human rights and supply chain issue of modern slavery after Bill C-423 did not make it past the first reading in 2018 due to lack of political momentum. The International Labour Organization ("ILO") estimates that there were 152 million children in child labour in 2019,[2] while World Vision Canada estimates that 1,200 Canadian companies could be importing goods linked to modern slavery worth $34 billion annually[3]. This article will examine how the Bill aims at addressing this supply chain issue before discussing a few recommendations that businesses can contemplate before the Bill or similar legislation becomes law.

It is unclear if the Bill in its current form will receive royal assent. Therefore, readers should be mindful that recommendations from the 2019 public consultation, as well as current parliamentary debates might result in amendments to the current draft of the Bill.

The Bill aims to combat child labour and forced labour in the supply chains of entities doing business in Canada. The Modern Slavery Act defines these two primary forms of modern slavery as:

While other forms of modern slavery exist (e.g. forced marriage, debt servitude), the Bill focuses on these two primary forms of modern slavery to implement Canada's international commitments under the fundamental conventions of the ILO, such as the Abolition of Forced Labour Convention[4] and the Worst Forms of Child Labour Convention.[5] The Bill also amends the Customs Tariff[6] to allow the Governor in Council to prohibit the importation of goods manufactured or produced by forced labour or child labour. 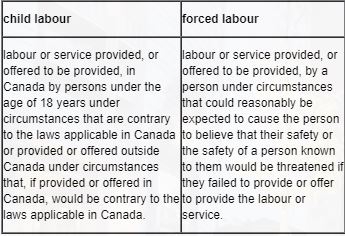 Entities covered by the Bill are broadly defined

The Bill would apply only to entities that meet particular criteria and perform certain prescribed actions. To be considered an "entity" under the Bill, a corporation, trust, partnership or other unincorporated organization must meet one of the following criteria: 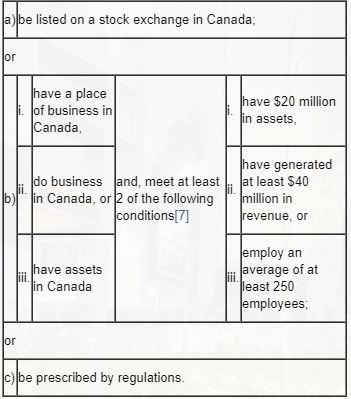 Furthermore, the Bill only applies to entities that: (a) produce or sell goods in Canada or elsewhere; (b) import into Canada goods produced outside Canada; or (c) control an entity engaged in either of the above.

These actions are defined quite broadly under the Bill in order to be as widely applicable as possible. As a result, the concept of production of goods under the Bill includes not only the manufacturing of goods, but also the growing, extraction and processing of goods. It should be noted, however, that the Bill does not apply to businesses that provide services.

Furthermore, the concept of control includes any manner of control, whether it be direct or indirect. Control can also be deemed to exist when an entity controls a second entity that controls or is deemed to control a third entity, thereby piercing through complex corporate structures.

The Bill is also binding on the government, suggesting that greater disclosure and due diligence may be required in the awarding of future public contracts.

Reporting obligations created by the Bill

The Bill creates an annual reporting obligation for entities to which the law applies. This would require subject entities to submit a report on or before May 31 of each year to the Minister of Public Safety and Emergency Preparedness (the "Minister"). Generally, the report must set out the steps taken during the previous financial year to prevent and reduce the risk of forced labour or child labour at any step of the production of the goods, whether produced or imported by the entity.

Moreover, the report must include information regarding:

Enforcement authorities will be given broad powers

The Bill foresees significant and detailed enforcement capabilities for law enforcement. Enforcement authorities designated by the Minister may enter any place in which they have reasonable grounds to believe there is anything or any document to which the Bill applies. In performing an examination, the enforcement authority is granted broad investigation and evidence-gathering powers.

Furthermore, if the place being examined is a dwelling-house, the enforcement authority may enter with a warrant issued ex parte by a justice of the peace. If this current draft of the Bill receives royal assent, the relevant authorities will have significant tools to enforce the requirements under the proposed legislation.

Penalties and director liability will give the law teeth

Although the penalties under the Bill are not as strict as in other jurisdictions, they still have a deterrent effect on entities that are subject to the law. All of the offences under the Bill are punishable on summary conviction and liable to a fine of up to $250,000. Any person or entity may be convicted of the following offences:

Officers, directors, agents and mandataries of the person or entity who directed, authorized, assented to, acquiesced in or participated in the commission of an offence are party to the offence and can be held personally liable, whether or not the entity is prosecuted or convicted.

For offences other than false or misleading statements or information, the entity is presumed to have committed the offence if it is proven that the offence was committed by an employee or agent of the entity, whether or not the employee or agent is identified or prosecuted. An entity may rebut this presumption if it establishes that it exercised due diligence to prevent the commission of the offence, thus encouraging subject entities to enhance their compliance and training programs to reduce any potential liability under the proposed legislation.

Examples of other jurisdictions that have passed modern slavery legislation

Below we have summarized the modern slavery legislation that has been passed in other jurisdictions. All of these laws contain a form of reporting obligation, similar to the Canadian Bill. The French and Dutch laws also contain due diligence obligations and come with significantly higher maximum penalties as a result.[8] It remains to be seen whether Canada will adopt any elements of the legislation adopted by these jurisdictions.

Although no binding Canadian modern slavery legislation is in effect yet, Canadian businesses can consult multiple sources to enhance their corporate governance and compliance programs in preparation for upcoming regulatory changes. The following are useful sources that can be used by entities as a starting point to address the human rights and reputational risk that lurks in their supply chains: