Business and Human Rights: Key 2017 developments and the road ahead 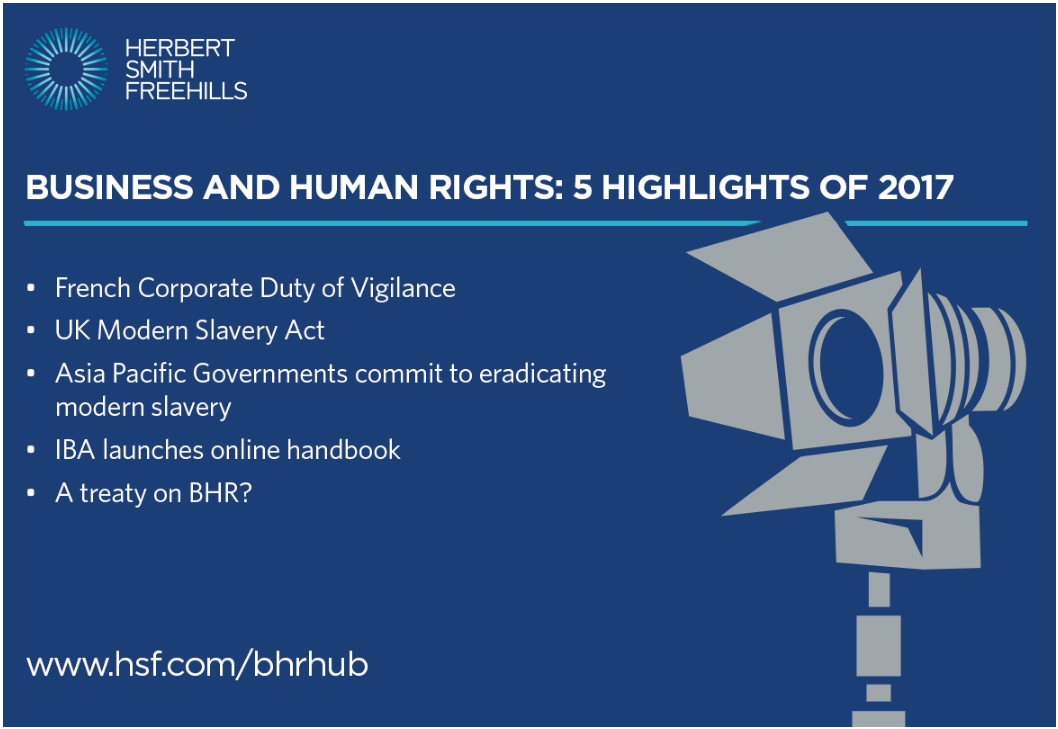 A company's vigilance plan must set out the reasonable steps that the company is taking to identify human rights risks and preventing serious human rights abuses resulting from activities of:

You can read more about the Law here.

The Law purports to go further than any other national legislation to implement the UN Guiding Principles on Business and Human Rights in terms of obligations and penalties. It is estimated that it will apply directly only to about 150-200 companies. However, the vast majority (if not all) of those companies will have subsidiaries and/or will work with suppliers and subcontractors such that their vigilance plans will need to cover a number of different entities in France and abroad.

It remains to be seen whether the civil liability mechanism set out in the Law will provide for effective remedies. Either way, the existence of that mechanism (along with the periodic penalties payment for which any interest party can apply) should reinforce the Law's objective to prevent human rights abuses. You can read more about the likely impact of the penalties here.

31 March 2017 marked the first anniversary of compulsory reporting under the UK Modern Slavery Act. We reported how, after initial apparent confusion, the MSA seemed to be succeeding in bringing issues of modern slavery before company's boards but, despite that, basic compliance remained low. Since then, the Business and Human Rights Resource Centre as launched a new platform for its Modern Slavery Registry, making it easier to search over 3,000 published transparency statements and the UK House of Lords has continued to consider two private members bills that seek to amend the Modern Slavery Act.

Then, in October 2017, there were two further developments. First, the UK Government released updated guidance in support of the reporting requirement. As we reported at the time, the updated guidance does not address, as it could have done, those parts of the MSA that are presently unclear (such as the definition of the term "carries on business", "supply chain" or "operations"). However, the guidance did seek more strongly to encourage businesses to include information in relation to all six of the categories set out in section 54(5) of the MSA, by stating that companies "should aim to" include that information, rather than just stating that they "may" do so.

Second, the Business and Human Rights Resource Centre launched its second review of the statements published by FTSE 100 companies. We summarised the findings of this report which described what it saw as a wide gap between a "cluster of leading companies taking robust action" and the majority of companies showing a "lacklustre response". Pressure on improved reporting looks set to continue.

On 24 and 25 August 2017, high-profile leaders in government and business from 45 countries in the Asia-Pacific region committed to eradicating modern slavery. The commitment was made at the inaugural meeting of the Bali Process Government and Business Forum in Perth, Western Australia. This demonstrates another important step toward legislating against modern slavery and is particularly pertinent in a region containing countries that are not only destination and transit countries for human trafficking, but also significant source countries.

In September 2017, the International Bar Association launched the first two chapters of its online Handbook for Lawyers on Business and Human Rights. This handbook is designed to help legal practitioners to develop, improve and supplement the legal services that they provide to their clients by helping them to gain a greater understanding of the human rights issues that are relevant to their legal practice and to their clients' activities.

A Treaty on Business and Human Rights?

An intergovernmental working group mandated to draft a new international legal instrument to regulate the activities of transnational corporations in relation to human rights held its third meeting in Geneva in October 2017.

A working paper published by the Chairperson-Rapporteur of the working group in advance of the meeting proposed a number of possible elements for the treaty, including the establishment of a specialist international court or other international tribunals to prosecute transnational corporations that commit human rights abuses. The proposals of this working paper are discussed here.

It is unclear whether a sufficient consensus can be reached regarding the content of a new international legal instrument. However, with states increasingly adopting legislation that implements principles of the UNGPs, it could be that a new legal instrument as envisaged by the working group may not be necessary. 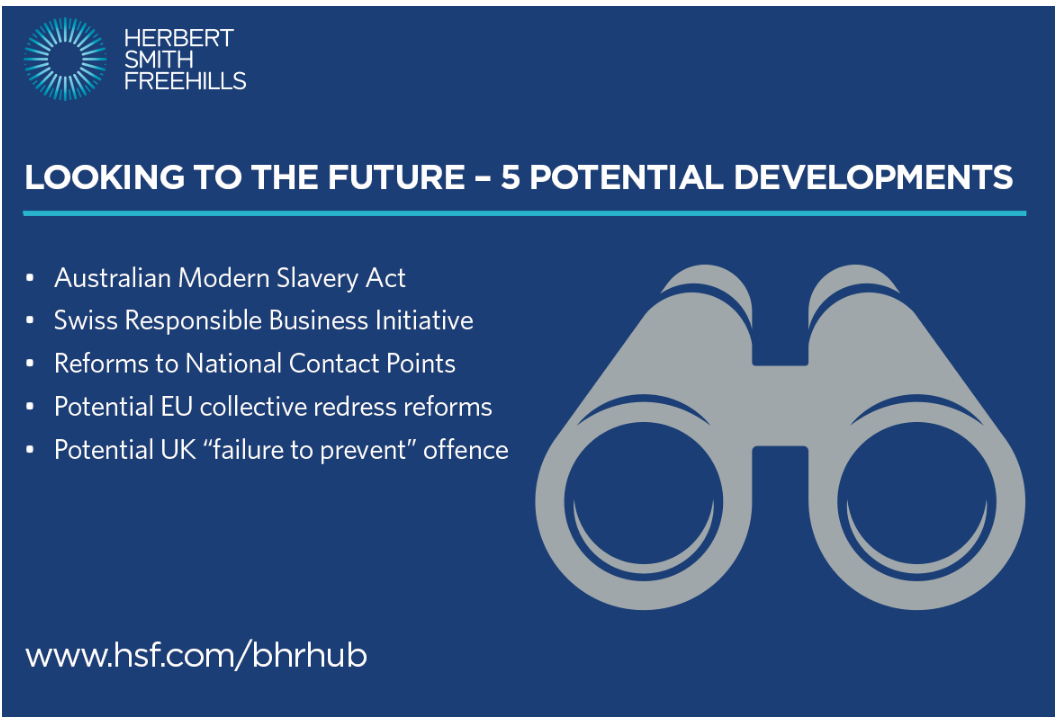 The Australian government has recently closed its public consultation on a new modern slavery act. Current proposals are for the new law to be modelled on the UK Modern Slavery Act. Indeed, consistency with existing global reporting requirements should be a key consideration, to ensure that resource in a multinational enterprise that is already subject to human rights reporting elsewhere is not diverted from the substance of the issues and towards the mechanics of technical compliance.

Submissions to the Joint Parliamentary Committee suggest that there is significant business support for enhanced supply chain reporting in Australia as it would create a level playing field for those companies who are already looking to address modern slavery risks in their supply chains. It is expected that the new law will be introduced in the first half of 2018.

The Swiss RBI is seeking an amendment to the Swiss Federal Constitution that would require companies to conduct mandatory human rights due diligence, in line with their UN Guiding Principles responsibilities. In response, the Legal Affairs Committee of the Swiss Parliament's Council of States has announced that a new Bill should be drafted based on three cornerstones:

Assuming that the proposed new bill receives the support of Switzerland's lower house of Parliament (the National Council), it will need to be fully drafted ahead of a referendum at the end of 2018 or start of 2019 to decide between the RBI's proposal and the draft bill.

As discussed previously on this hub, the 6th annual UN Forum on Business and Human Rights took place in Geneva in November 2017, focusing on theme of "Realising Access to Effective Remedy". One of the three types of remedy mechanism set out in the UNGPs is state-based non-judicial mechanisms, the most important of which is the network of 48 OECD National Contact Points ("NCPs").

The effectiveness NCPs has been criticised in the past, including in OECD Watch's Remedy Remains Rare (June 2015) and Remedy is the Reason (June 2016) reports. Improving the effectiveness of NCPs therefore attracted a lot of discussion at the UN Forum. OECD Watch launched a campaign and the UN Working Group on Business and Human Rights also prepared a discussion paper , both aimed at making NCPs more effective.

Participants at the forum also discussed OECD Watch's interim findings and recommendations from the OECD NCP peer review process that is ongoing. With the UK NCP due to undergo its NCP peer review in the second half of 2018 and the UK Joint Committee on Human Rights having recommended in April 2017 that the NCP mechanism should be strengthened, we may see developments in this area.

Alleged victims of human rights impacts have continued to seek redress by way of class actions being brought in an overseas jurisdiction. In the UK, the Court of Appeal is considering its decision in the Shell appeal and the appeal against Unilever is due in the new year. These decisions could illuminate the extent to which a UK-domiciled company might owe a duty of care to local communities in relation to activities associated with an oversea subsidiary.

In Canada, the British Columbia Court of Appeal has upheld the decision to take jurisdiction over a human rights claim against Nevsun Resources. This means that (absent a settlement) a mass tort claim will take place in Canada in relation to modern slavery issues, based (in part) on allegations of violations of international human rights norms. In addition, the British Columbia Court is due to hear claims against Tahoe Resources after security guards sprayed protesters with rubber bullets outside the Escobal mine in 2013.

But developments in this area are not limited to the courts. The EU Fundamental Rights Agency is encouraging reform of EU collective redress mechanisms to allow greater access to remedy for human rights victims. In particular, it published an opinion in April 2017, in which it suggested (amongst other things) that the EU should consider how to ensure that its member states offer global and equitable access to remedy for human rights breaches, including addressing extra-territoriality in legislation. The European Commission is also considering potential reforms to EU collective redress mechanisms and the European Coalition for Corporate Justice (ECCJ) has recently written to the Commission in support of such reforms. You can read more about the ECCJ's position on this issue here.

In April 2017, the UK Parliament’s Joint Committee on Human Rights published a report on Human Rights and Business that urged the Government to introduce new legislation and to take stronger enforcement action to prevent business-related human rights abuses. One recommendation was that the Government should introduce legislation that business enterprises could be liable to prosecution for failing to prevent human rights abuses. The proposal is that this would operate in a similar manner to the UK Bribery Act 2010, which imposes criminal sanctions for companies who fail to prevent bribery unless they can show that they had in place "adequate procedures" designed to prevent persons associated with them from committing bribery. Although there is a noticeable element of civil society support for stronger enforcement powers, there is currently no indication that the UK Parliament is considering any immediate steps to introduce such legislation.