On 14 October 2019, the Luxembourg Parliament (Chambre des députés) released the 2020 draft budget law (Bill).1 The major proposed tax measure provided by the Bill should affect rulings (i.e., Advance Tax Agreements (ATA) and Advance Pricing Agreements (APA)) issued by the Luxembourg Tax Authorities (LTA) before 1 January 2015. According to the Bill, the ATAs and APAs should cease to be applicable as of the end of the 2019 fiscal year.

Paragraph 29a of the Luxembourg General Tax Law dated 22 May 1931 (Abgabenordnung; General Tax Law), introduced by the law of 19 December 2014, already provides a limitation period of five years for ATAs and APAs issued after 1 January 2015. ATAs and APAs issued before this date were not subject to this limitation period and were therefore considered valid for an unlimited period of time to the extent that they comply with the legislation in force and the fact pattern they originally set out.

Practical implication of the Bill

According to the commentaries of the Bill, taxpayers with an ATA or APA issued before 1 January 2015 should be able to request a new ATA or APA to the LTA based on the new procedure provided by §29a of the General Tax Law (mentioned above).

Since the Bill is at the very beginning of the legislative process,2 there is a possibility that further amendments may be adopted. 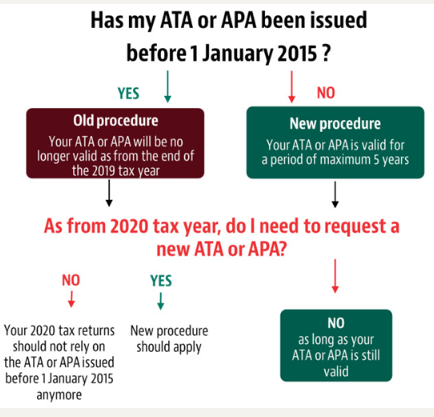 To view all formatting for this article (eg, tables, footnotes), please access the original here.
Baker McKenzie - Antonio A. Weffer and Amar Hamouche
Back Forward