The Liquor Licensing (Liquor Review) Amendment Act 2017 (SA) introduced significant changes to the liquor licensing regime in South Australia. The changes have been implemented in stages. One of the most significant – transition to “new” categories of liquor licences – will take effect 28 November 2019. At the same time, increased licensing fees announced in the State Budget will have significant impacts for some of the “new” categories of licence.

The Amending Act commenced on 18 December 2017, albeit with the commencement of many of its provisions suspended.

Some of the changes to the South Australian liquor licensing regime introduced by the Amending Act have already come into effect (from 18 December 2017 and 24 September 2018).

This is one of an ongoing series of Legal Alerts on changes to South Australian liquor licensing laws. We discussed these new elements of the licensing regime in our:

LIQUOR LICENCE CATEGORIES - OUT WITH THE OLD

The Amending Act overhauls the existing structure of liquor licence categories, which has been in place since 1997 (with additions and amendments along the way). In this regard the Amending Act reflects the recommendations of the Hon Tim Anderson QC in his report titled ‘Review of the South Australian Liquor Licensing Act 1997’ dated 29 June 2016.

There are transitional provisions to facilitate the change from existing to “new” categories of licence (Transitional Provisions).

The current (soon to be “former”) licensing regime is based on 12 categories of permanent liquor licences in South Australia, which are:

The Hotel Licence and Retail Liquor Merchant’s Licence have traditionally been considered to be the most commercially valuable licence categories, including by reason on the limitation of the proliferation of these categories of licence by operation of a “needs” test under the licensing legislation.

The Special Circumstances Licence (SCL) category, intended for businesses that do not “fit” in other categories has had a varied history, and some existing SCLs with broader trading rights are valued in circumstances where the licensing authority has since taken a more restrictive approach in granting new SCLs.

LIQUOR LICENCE CATEGORIES - IN WITH THE "NEW"

In September 2018, we noted that the imminent changes to categories of liquor licences in SA would affect both new applications and existing licences.

The new categories of permanent liquor introduced with effect 28 November 2019 are:

Notably, the SCL category is effectively abolished by the Amending Act.

A legitimate question that arises as a result of the incoming “new” categories of licences is “what happens to the existing licences which fall into a category which is being abolished / replaced?”

The answer is laid out in Schedule 2 of the Amending Act which contains the Transitional Provisions (which will come into effect 28 November 2019). The Transitional Provisions are intended to ensure that the existing licences are transitioned into the appropriate “new” licence categories (while, as far as possible, not losing any trading rights attached to the same).

The table below sets out the transition from the existing categories to the “new” categories of licences following the commencement. 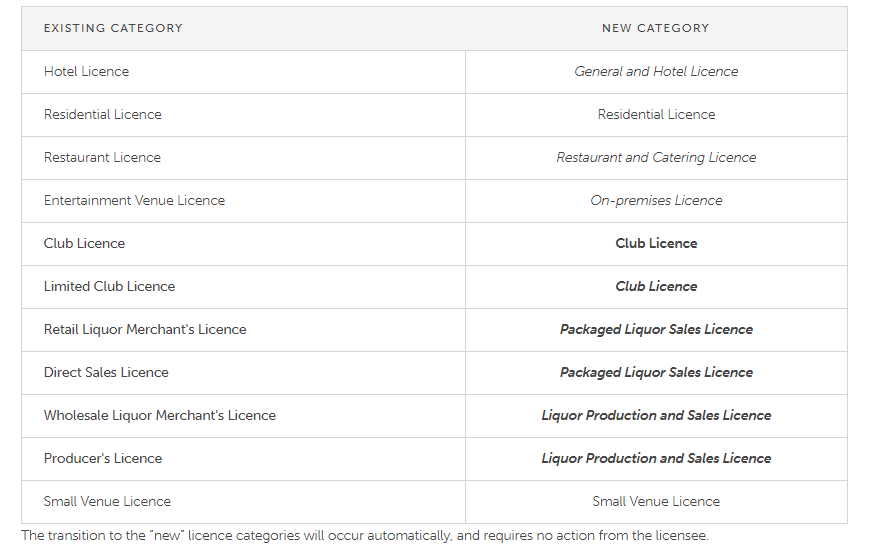 The State Government’s Consumer and Business Services Department advised that “new” liquor licence categories will begin being communicated to licensees from 23 May 2019. Existing licensees will have by now received notices from the licensing authority as to the proposed transition of their existing licences.

An application for a liquor licence (including for a SCL) which was lodged with the licensing authority pursuant to the Act on or before 30 September 2019 will continue to be processed as if the Amending Act had not come into existence (“old” system).

Effectively, the licensing authority is recommending that any applications to be made under the “old” system should be made prior to this period if the applicant wishes to avoid delays with respect to the granting of their licence.

If the licensing authority grants a licence (pursuant to an application made under the “old” system) then the authority must grant a licence in a “new” category and not one in an “old” category. Again, no action is required by the applicant in these circumstances.

Farewell the SCL and the “Catch All” Category

Notably, the above table omits any mention of the SCL.

Schedule 2 of the Amending Act sets out the Transitional Provisions in relation to the SCL.

In short, for an SCL:

The Amending Act also provides that the Commissioner (upon application by the licensee) may transition the SCL to any other “new” category of licence if the Commissioner considers it to be “appropriate” in light of the conditions of trade authorised under that particular licence.

By their nature, SCLs can carry a range of trading conditions and rights, and are used for an exceptionally wide range of businesses.

Current licensees need to be aware of, and plan for, the upcoming transition. New entrants need to consider their licensing needs and options in the context of the “new” licence categories and “new” fee regimes.

The State Government in its recent budget announcement has flagged changes to the annual licensing fee structure.

For some licence categories and business conducted under them, fee increases may be very substantial.

A detailed analysis of the politics and policy of the fee increases is beyond the scope of this Alert. The increases have been framed as reflecting a “risk based” fee structure, including in line with recommendations of the Hon. Tim Anderson QC’s review.

Click here, if you require further information regarding the fee increases specific to you and your business.

In contrast to some other jurisdictions, the “risk based” fees are not set by reference to the particular licensee’s own compliance history, but rather by reference to licence category, trading hours (potential as per the licence, rather than actual or seasonal), licensed capacity, and in certain respects, location.

Critics have suggested that the fee structures amount to an “early closing” law in practical effect (where some licensees may be forced to curtail trading hours on the licence to avoid substantial fees).

In any event, the “new” fee structures will apply to existing licences from July 2020 with the fee payable in July 2019 to be based on the existing fee structure.

Licensees should note the possibility that a number of conditions on their current licence could drastically increase their fees. Most notable are the incoming “trading hours risk fees”. These are:

Importantly, these fee increases apply irrespective of whether your venue actually trades within these hours. The “new” fee structure will apply according to the trading hours authorised on the face of the licence.

As such, it is important that licensees who do not wish to be on the sharp end of this “new” fee regime:

Licensees should be aware that they can make changes to their trading hours and capacity via the Liquor and gaming online portal on the CBS website. The portal is available until 31 August 2019. Any changes to your licence must be submitted by this date.

Finlaysons - Andrew Williams and Will Taylor
Back Forward