In William Powell Co. v. OneBeacon Ins. Co., 1st Dist. Hamilton No. C-190199, 2020-Ohio-5325, Ohio’s First District Court of Appeals held that an excess insurer’s attachment point holds constant, in accordance with the terms of the policy, regardless of whether a policyholder purchases additional primary policies covering a long-tail claim. The court framed the issue as whether a policyholder is required to exhaust its insurance coverage vertically or horizontally.

This framing is impossible to appreciate without first picturing a coverage chart—which is a graph that looks like a series of blocks stacked along an x and y axis. Each block is an insurance policy. The width of the block, running along the x-axis, represents the time the policy was in place; the length of the block, stretching up the y-axis, represents the coverage limits of each policy. The first layer of blocks represents the policyholder’s primary insurance policies. The blocks stacked on top of the primary layer are umbrella and excess policies. 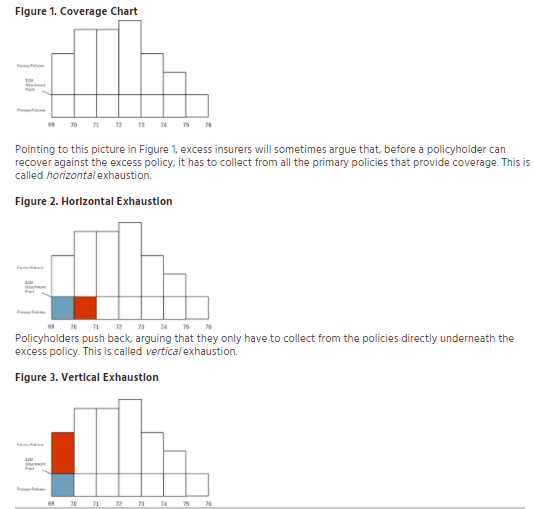 Ultimately, though, vertical exhaustion and horizontal exhaustion are dueling approaches to interpreting a coverage chart, not an insurance policy. No excess policy mentions exhaustion—vertical, horizontal, or otherwise. Instead, excess policies normally say something to the effect that they will pay losses that exceed the limits of “underlying insurance.” The total underlying limits of an excess policy is referred to as that policy’s “attachment point”—i.e., the point at which the excess policy begins paying.

Returning to the coverage chart, the attachment point is the line where the excess policy rests on top of an underlying insurance policy. Horizontal exhaustion, in effect, is an attempt to raise this line.

There is nothing in the language of most excess policies, however, that would permit an insurer to raise its attachment point. The court in William Powell correctly held that excess insurers are required to pay losses that exceed the limits of underlying policies covering the same policy periods as the excess policy. This holding is helpful to policyholders, who can rely on it to press excess insurers to pay more quickly for long-tail claims spanning multiple policy periods.