All change for Poland's banking market

A raft of regulatory changes, both domestic and EU-related, is reshaping the Polish banking market. As the biggest economy in Central and Eastern Europe, any changes to its banking system will have an impact on the rest of the region. Here we explore some of the most important changes.

For the past few years, FX loans have been one of the most talked-about topics on the Polish economic and political landscape. According to the data of the Polish Financial Supervision Authority (PFSA) from July 2017, approximately 40 percent of the outstanding PLN 396 billion (approximately €94 billion) consumer mortgage loans granted by Polish banks are denominated in foreign currencies (mainly Swiss francs). 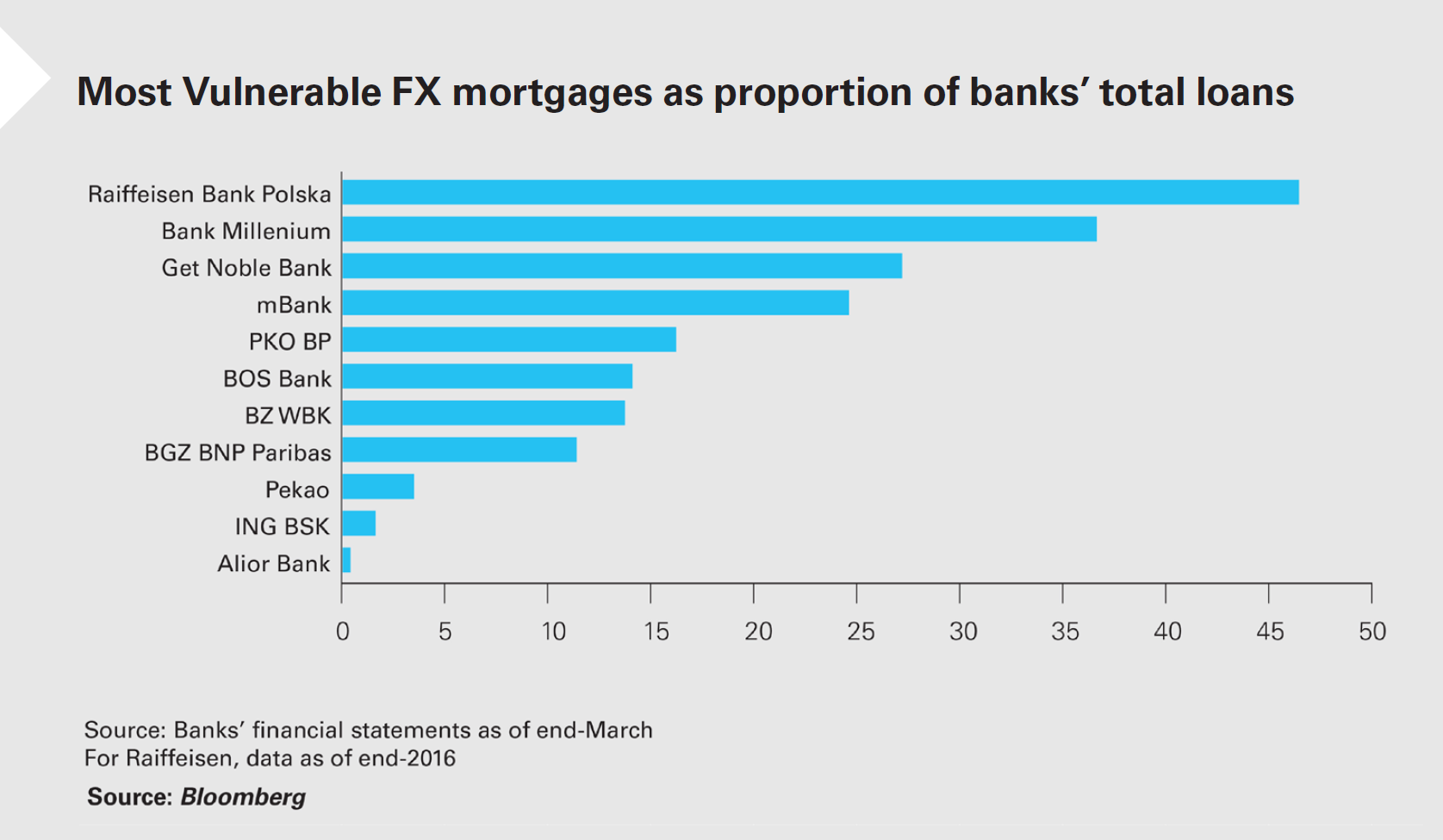 During the mid-2000s, immediately after Poland’s entry into the European Union, there was a proliferation of mortgage loans denominated in foreign currencies due to significantly lower interest rates. Since then, the Polish Financial Supervision Authority has restricted the granting of new loans (since 2013 Recommendation S only allows banks to loan to individual customers in the currency in which the customer obtains the majority of his/her income).

While both the current and previous governments have publicly indicated their willingness to introduce legislation that would relieve some of the burdens of FX loans (indeed going as far as proposing a forcible conversion of the existing FX loans into zloty-denominated loans), the only legislation passed to date is the 2015 Act on Assistance to Borrowers in Difficult Financial Situations who Took a Residential Loan (the "2015 Act"). The impact of the 2015 Act has been rather limited, as it only provides assistance to borrowers who are unemployed (with certain exceptions), have very low income or for whom the costs borne in connection with the loan exceed 60 percent of the income of their household. Furthermore, the duration of the assistance in the form of repayment of installments in an amount not higher than PLN 1,500 (approx. €350), per month by the state-run Bank Gospodarstwa Krajowego, cannot exceed 18 months.

However, the changes in the regulatory approach did not affect existing loans. In the meantime, a significant increase in the value of the Swiss franc relative to the Polish zloty (while currently CHF 1 is valued at ca. PLN 3.6), in the heyday of CHF-denominated loans, CHF 1 was worth ca. PLN 2.00 combined with a reduction of the value of some of the real estate underpinning the mortgage loans and has resulted in significant problems for some borrowers whose installments are nearly twice as high as at the time of the conclusion of the loan agreement. At the same time, several banks have ended up with significant portfolios of potentially distressed assets. 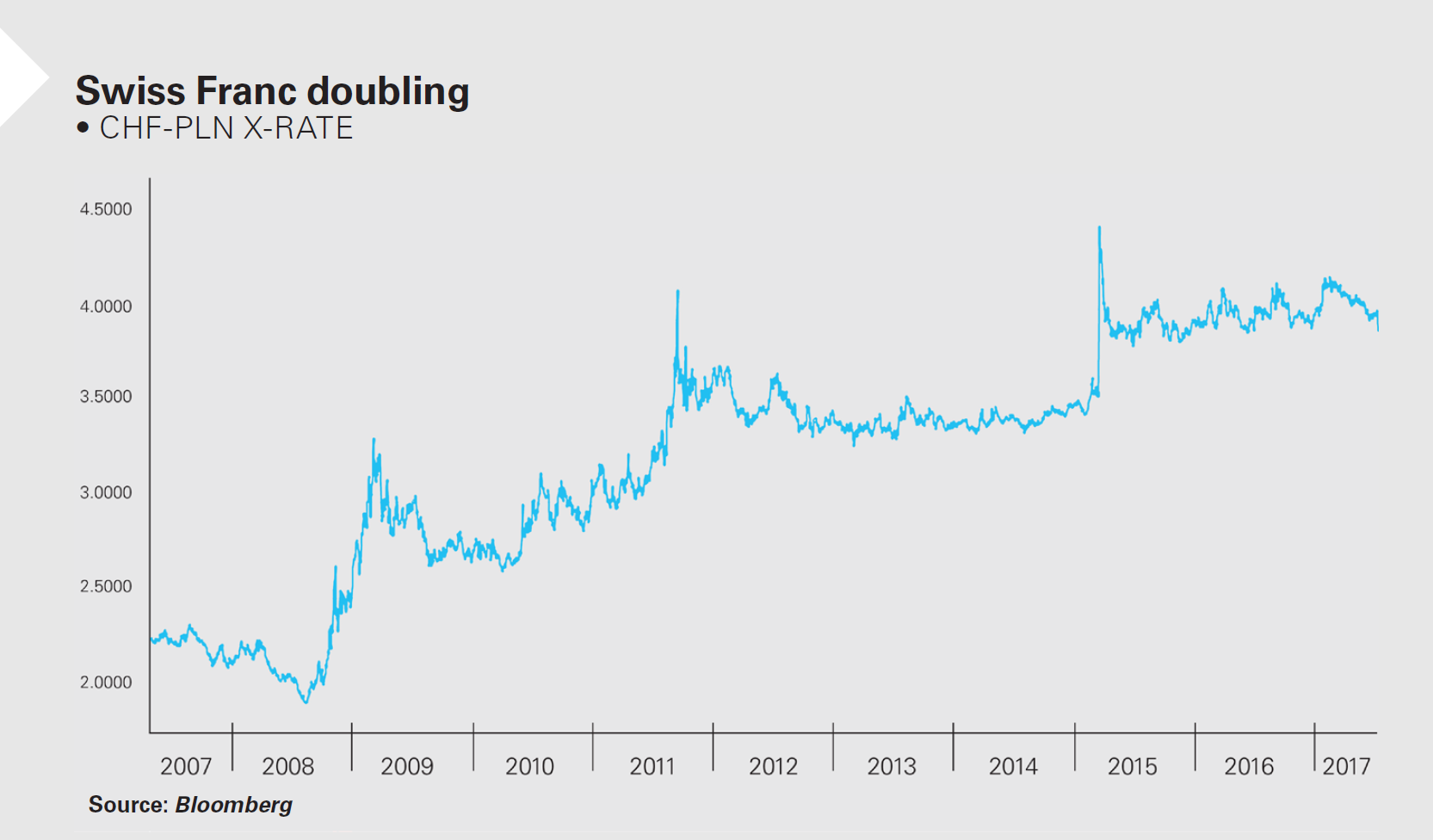 Critics of the 2015 Act say it does not resolve the structural issues associated with FX loan portfolios, but instead focuses on providing short-term relief for borrowers whose financial situation has rapidly deteriorated. In order to address the broader FX loan issue, numerous proposals have been introduced by members of parliament. However, the only legislative proposal that currently appears to have a realistic chance of being passed was presented earlier this year by Polish President Andrzej Duda (the "Draft Act"). The Draft Act contains the following restructuring and assistance mechanisms:

While some observers say the above proposals are still not fully adequate, they are more far-reaching than the original legislation. In particular, the provisions that allow the Restructuring Fund to cover the "loss" of the lender resulting from the loan conversion could be a satisfactory solution for both lenders and borrowers.

The PFSA is working on a new recommendation which, while not formally binding, would strongly compel banks operating in Poland to restructure FX loans on a voluntary basis and allow borrowers to convert them into zloty-denominated loans, which combined with the "loss coverage" provisions, could provide a long-term solution.

The 1997 Polish Act on Covered Bonds and Mortgage Banks (the "Covered Bonds Act") recently celebrated its 20th anniversary. Until recently, the Act, which creates the legislative framework for the operation of specialized mortgage banks, the only entities allowed to issue covered bonds under Polish law, has been of rather limited use. However, changes introduced in the last two years have reinvigorated the market, and led to the establishment of international covered bond programs by Polish banks, such as PKO Bank Hipoteczny S.A., which established a €4 billion programme in 2016 and mBank Hipoteczny S.A., which announced a €3 billion programme a year later. The main changes include:

From the perspective of the economic viability of an investment in covered bonds, the exemption of interest on covered bonds from withholding tax since the start of 2016 is a particularly welcome measure. Since the first international issue of Polish covered bonds in October 2016 by PKO Bank Hipoteczny S.A., the product has been a resounding success (all existing issues were significantly oversubscribed, and the first issue was oversubscribed by 200 percent).

Given the overwhelmingly positive feedback, other big market players are looking at the possibility of opening mortgage banks, including ING, which has already obtained a license in January 2018, and Bank Zachodni WBK (Santander group), which is in the process of obtaining one.

The benefits of the new legislation are self-evident. The creation of additional regulatory restrictions, such as mandatory overcollateralization and liquidity buffers along with new bankruptcy procedures, means that international investors now regard Polish covered bonds as a safe product. From a borrower’s perspective, increasing a mortgage bank’s ability to refinance mortgages (and consequently to increase their cover pool) while reducing the tax burden has made the product economically viable. The fact that several key players in the market (including non-Polish banks) are considering opening new mortgage banks is a clear indication that the market is destined to grow.

In July 2017, a new act on mortgage credit and supervision over intermediaries and agents entered into force in Poland. The Mortgage Credit Act introduced a number of new rules for credit institutions granting mortgage loans, aimed at protecting borrowers who are consumers (the legislation does not affect loans granted to businesses).

While the Mortgage Credit Act transposes Directive 2014/17/EU on credit agreements for consumers relating to residential immovable property into Polish law, it also introduces several concepts specific to the Polish market. First, the new Mortgage Credit Act formally codifies the restriction on the granting of FX loans first introduced in Recommendation S in 2013 by the Polish Financial Supervision Authority. According to the Mortgage Credit Act, a mortgage loan can be granted only in a currency or indexed to a currency in which the consumer gains most of his or her income or holds most of his or her funds or other assets. Second, the Mortgage Credit Act limits the ability to grant mortgage loans to banks (including EU credit institutions and Polish branches of non-EU banks) and credit unions. As a result, non-banking lenders will no longer be able to grant mortgage loans to consumers. Furthermore, the provisions of the Mortgage Credit Act introduce a register of credit intermediaries maintained by the PFSA, and also set out the scope of supervision over the economic activity of mortgage credit intermediaries and agents. The changes in the Polish banking sector are substantial, and they are hapenning at a great pace, but will they be good for the country’s economy? Only time will tell.