Two weeks ago Volkswagen (VW) officially retired its iconic Beetle model car, signalling the beginning of a new phase in the German automaker’s product development as it focuses on emerging industry trends. The company further released more information on its global alliance with Ford. The American company will be using VW’s modular electric drive matrix (MEB) platform, for electric cars, and VW will be pouring $2.6 billion into Ford’s self-driving unit. Such developments provide an insight into how the company is adapting its strategy to address an evolving marketplace, and the shifts facing the automotive sector as a whole.

Automotive companies have a long history of pairing up to save costs, and, aside from the agreement between Ford and VW, Honda has joined forces with General Motors, and Waymo has agreements with both Fiat Chrysler and Jaguar Land Rover, all relating to autonomous driving technologies. Such relationships will prove critical as the industry is faced with a number of disruptors, ranging from autonomous driving to the micromobility wave. These new trends have created opportunities for smaller, digitally focused businesses to enter the market. In the future, then, it will be increasingly important for traditional car manufacturers to collaborate and utilise their brands and reputation to keep a competitive edge.

Positively, the automotive industry has traditionally maintained an open relationship, sharing new innovations (especially around safety) without engaging in large licensing battles. There is thus a strong sense of comradery within the industry, and it has seen both high levels of collaboration and consolidation.

For its part, Volkswagen boasts the most valuable portfolio of automotive brands worldwide, according to Brand Finance’s 2019 Automotive Industry report. Its holdings are diverse, and include Audi, Porsche and Skoda. The latter two experienced the highest brand value increases of all automotive brands over the past year. However, of all the companies under its umbrella, VW has the highest number of trademark protections by a landslide (see graph below). 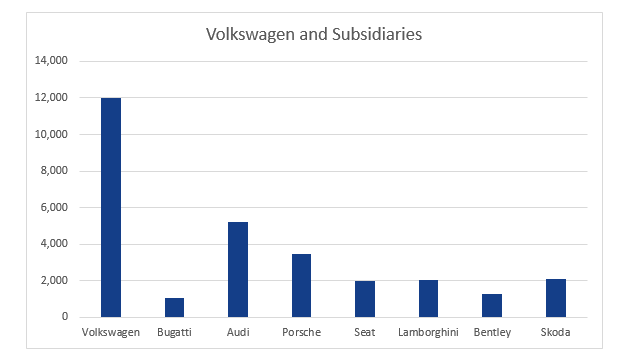 The strength of VW’s brands is based on the automaker’s strong reputation, helping it to recover from the 2015 emissions scandal. Its brand value has been climbing since 2016, and it has long-since recovered the value lost after that scandal. In 2018 it rose by 4.5% to $41,739 million (see graph below). 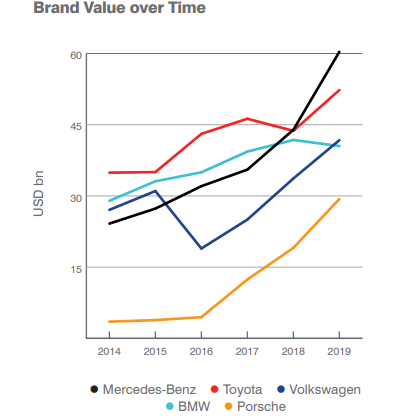 While the picture is positive, cross-sector collaborations may have to deepen as more existential threats loom for the industry. As new players enter, who are not traditional original equipment manufacturers (OEMs), existing strong brands may need to combine their power to hold onto market share and maintain a competitive edge. They also need to innovate themselves.

Autonomous driving has been a growing trend over the years, and by 2030 40% of the mileage driven in Europe could be covered by autonomous vehicles. Trademark filings show how quickly these technologies have been developed over the past three years (see graph below). 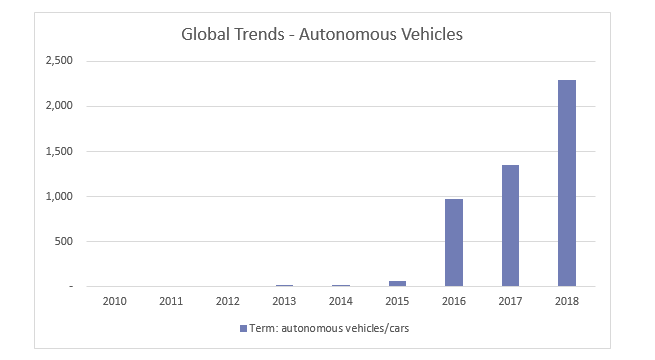 Electric and hybrid vehicles are other automotive concepts of the moment. In the future there will only be a small percentage of pure combustion engines among new car sales in the EU, and more than 55% of new cars will be fully electrified. Overall, 95% of new car sales are expected to partially electrified in 2030. Trademark trends show that electric vehicles have been a market commodity for much longer than self-driving cars, but there has been a definitive uptick in filing activity since 2016. 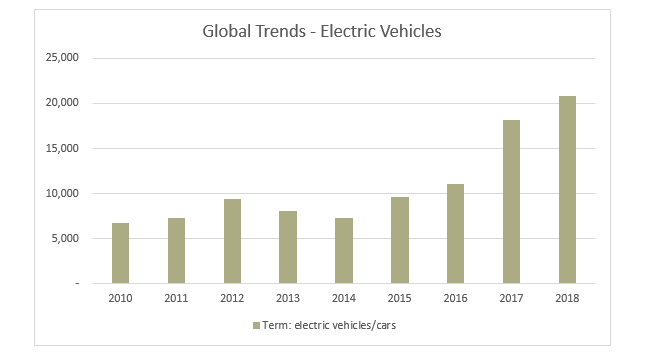 Source: CompuMark (note: Chinese trademarks were omitted from this search)

Although the car industry has innovated to stay ahead of these developments, PwC’s Five trends transforming the automotive industry report argues that there needs to be less investment in product range in order to focus even more on R&D. Tesla is the only automotive company that appears in the top 10 of the most innovative companies in the world, and during 2015 and 2016 R&D spending actually decreased by 4% within the automotive industry. What this means is that, while OEMs have evolved to follow existing trends, they may not be at the forefront of ongoing developments, which puts them at risk of falling behind.

Companies’ business models also need to adapt. In the future it is expected that there will be more of a focus on services, rather than the production and sale of parts (see graph below).

Source: McKinsey & Company, Ready for Inspection – The Automotive Aftermarket in 2030

While personal car ownership is unlikely to ever be fully eradicated, mobility start-ups have emerged to disrupt the market, especially in dense urban regions (see graph below). Most popular at the time being are ride-hailing apps such as Uber and Lyft, which both went public this year. 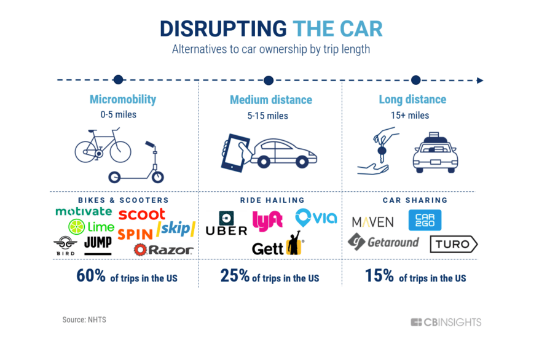 Aside from ride shares, there has been a sharp uptick in micromobility. This is partly because roughly 60% of trips in the US are five miles or less, offering an opportunity for bike and scooter start-ups to capitalise. Bird and Lime, two start-ups of this nature, have reached unicorn status within a number of months.

Since 2015 stakeholders have invested more than $5.7 billion in micromobility start-ups, with more than 85% of this targeting China. Uber and Lyft have both capitalised on this development: the former acquired Jump, a shared e-bike platform, and the latter Motivate, the US’s largest bike-sharing operator. In July 2018 Uber reported that rides on Jump had overtaken the ride-hailing service during periods of high congestion (see graph below).

The estimate of the shared micromobility market across China, the EU and the US is between $300 billion to $500 billion in 2030, which equals about a quarter of the forecasted global shared autonomous-driving market. The graphs below how trademark filings relating to scooters and bicycles have grown over the years, with a noticeable jump in 2016. 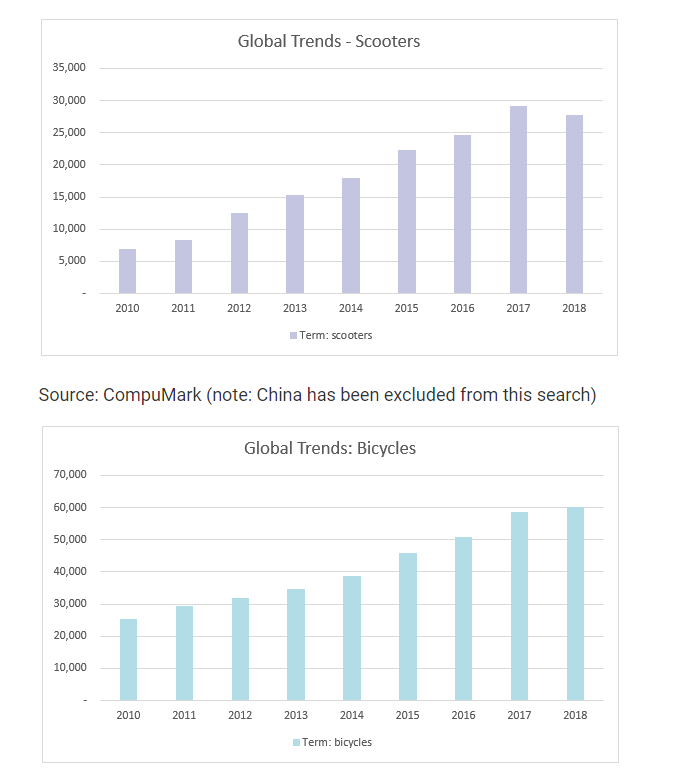 Source: CompuMark (note: China has been excluded from this search, as well as Japan’s Ikuhiro Ueda, who filed an extraordinary amount of “bicycle” applications).

OEMs are not oblivious to these trends, with automakers such as BMW and Ford reorienting themselves as mobility service companies. Volkswagen’s 2018 annual report flags building its mobility solutions business as a strategic initiative. In order to accomplish this, it has highlighted the need to establish a mobility solutions business and develop a smart mobility offering. A look at VW and its major subsidiaries’ combined portfolio shows that the company began filing trademarks relating to disruptor terms in 2017 (see graph below). 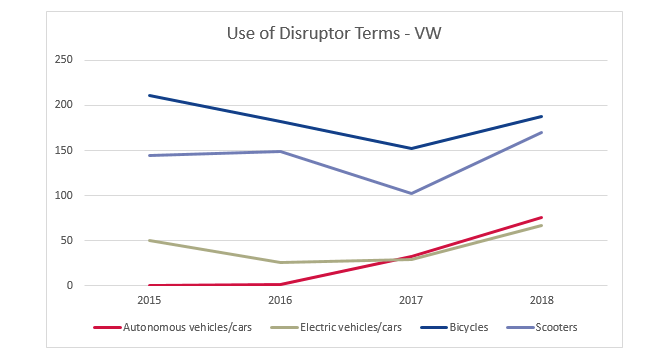 A significant risk to traditional automotive players is the entrance of digital natives. As these companies expand on new opportunities in the industry they will likely gain significant footholds of the market and will be the main competitors to OEMs going forward.

While this is something to be aware of, it is worth noting that the micromobility industry is in its infancy and is still dealing with practical issues as it attempts to scale-up. During this time, automotive makers need to focus on strong brand positioning and leverage their reputations as they look to expand their footprint into emerging areas. There may be a bumpy road ahead, but automotive companies have proven adaptable in the past and can leverage strong brands as they seek to tap into new transport trends.