(Continued) In-depth Guide of Eligibility Requirements for Biotech and Pharma Patents in the United States, Taiwan, Japan and China

In this second part, we continue to introduce and compare the regulations and practices on the eligibility of biotech and pharma patents in Japan and China, and further analyse the similarities and differences among Taiwan, the United States, Japan and China to provide guidance for applicants seeking patent protection in these countries.

In Japan, it is explicitly stipulated in Chapter 1, Part 3 of the Japan Patent Examination Guidelines [4] which corresponds to the industrial applicability [5]in Article 29 of the Japan Patent Act, that diagnostic, therapeutic and surgical methods for the medical treatment of humans are the subject matters of statutory exclusion that do not meet the industrial applicability requirements and are, therefore, unpatentable. The determining steps in the Japan Patent Examination Guidelines and the exemplified table are depicted below.

Step 1 asks whether a subject matter is related to a “medical treatment”, i.e.:

(i) a method of surgery of humans;

(ii) a method of therapy of humans ; or

(iii) a method of diagnosis of humans.

Step 2 asks whether a claim is:

(i) a product (e.g., drugs, pharmaceutical compositions, or medical devices); or

If a claim is directed to a product or a non-medical treatment method, it is industrially applicable; if not, proceed to Step 3.

Step 3 asks whether a subject matter corresponds to an exception, i.e.:

(i) a method for controlling the operation of a medical device;

(ii) a method for gathering information from the human body by measuring the structures and functions of organs in the body; or

(iii) a method for processing samples isolated from the human body.

If a subject matter belongs to any of the exceptions above, it is industrially applicable; if not, it shall not be granted. 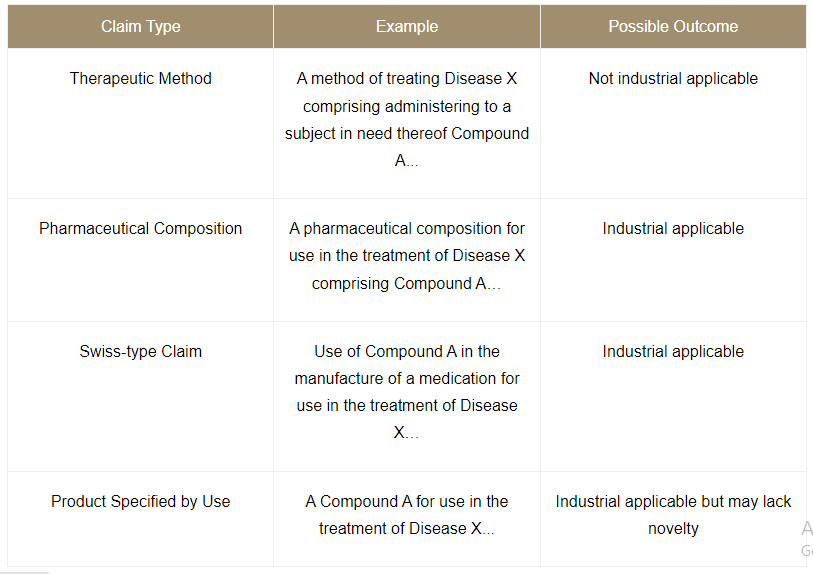 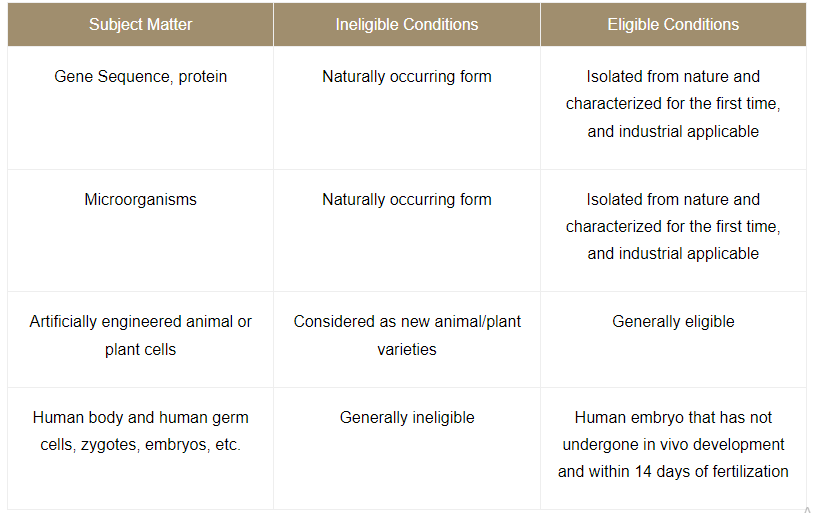 According to Article 25 of the China Patent Act, gene sequences, proteins, microorganisms and so on are ineligible if they are in natural forms existing in nature [6]. However, if the isolate is characterized for the first time and industrial applicable, it is an eligible invention. Artificially engineered animal or plant cells are usually patent eligible; however, human germ cells, zygotes, embryos, etc., belong to human bodies and therefore are not granted under Article 5 China Patent Act [7]. Nevertheless, according to Chapter 1, Part 2 of the China Patent Examination Guidelines [8], human embryos that have not undergone in vivo development and within 14 days of fertilization are patent eligible.

Diagnostic or therapeutic methods are also the subject matters of statutory exclusion under Article 25 China Patent Act [9], and the criteria for determination are as follows:

1. object: directed to a living human or animal body; and

2. immediate purpose: to obtain diagnostic results or to treat disease.

Hence, the diagnostic and therapeutic use of a substance (drugs, cosmetics, etc.) is ineligible.

For instance, when “inseparable” therapeutic effect of a composition is described in the specification, even if the claim is defined as “a method of treating the skin for non-therapeutic purpose, comprising topical application of the composition...”, it is still ineligible.

Relatively, an in vitro detection method based on isolated samples is patent eligible. For instance, “A method for detecting cell mitosis in a breast cancer scoring system (to obtain a sample set for training mitosis identification model)” is found eligible because the immediate purpose of the detection is to obtain not diagnostic results but just intermediate results for model training.

Similarly, methods and uses of medical devices and treatment-related auxiliary systems are patent eligible. For instance, “A detection method for a medical intravenous transfusion alarm, ...” is also found patent eligible because the information collected by the detection is only used to reflect transfusion status rather than the patient’s condition.

In summary, the eligibility requirements for biotech and pharma patents in Japan and China are similar to those in Taiwan, but significantly different from those in the United States.

Regarding the invention of specific gene sequences and microorganisms, applications filed in China, Japan or Taiwan are rarely considered to be patent ineligible, whereas in the United States, genes and microorganisms are often deemed as natural products and are at risk of being rejected owing to eligibility requirements of the subject matter under 35 U.S.C. §101, unless the applicant can prove that the claimed invention has been artificially engineered to contain features significantly different from those of laws of nature.

Moreover, if a drug is known to have a secondary medical use and the applicant writes the claim as a product with new use, Japan recognizes the novelty of the drug; however, under Taiwan and China practices, any claim phrasing a known drug as the subject matter is considered not novel because the drug is already known, i.e., the new use has no contribution to the novelty of the claim. In addition, biotech case precedents are also useful references which applicants should pay attention to before seeking biotech and pharma patents.