Effective as of 20 April 2021, an amendment to the Arrangement on Officially Supported Export Credits (TAD/PG(2020)1) (the “Arrangement”) was announced by the Organisation for Economic Co-operation and Development (“OECD”), in relation to local cost provisions (the “Amendment”).

Background The Arrangement (described on the OECD website as a “gentleman’s agreement”1) first came into effect in 1978. Although the Arrangement is voluntary and does not have the force of law it is generally credited with having achieved its goals of providing (i) a framework for the orderly use of officially supported export credits and (ii) a level playing field for official support, in order to encourage competition among exporters based on quality and price of goods and services exported rather than the terms and conditions of that export credit agency’s support. The Arrangement achieves these goals by placing limitations on applicable financing terms and conditions.

Whilst other OECD members and non-members may be invited to become participants to the Arrangement, the current participants are: Australia, Canada, the European Union, Japan, Korea, New Zealand, Norway, Switzerland, Turkey and the United States. The Arrangement applies to all official support provided by or on behalf of a government for export of goods and/or services2, including financial leases, which have a repayment term of two years or more.

Amendment to Local Cost Provisions As from 20 April 2021, the maximum local cost provisions of the Arrangement are changing as follows: 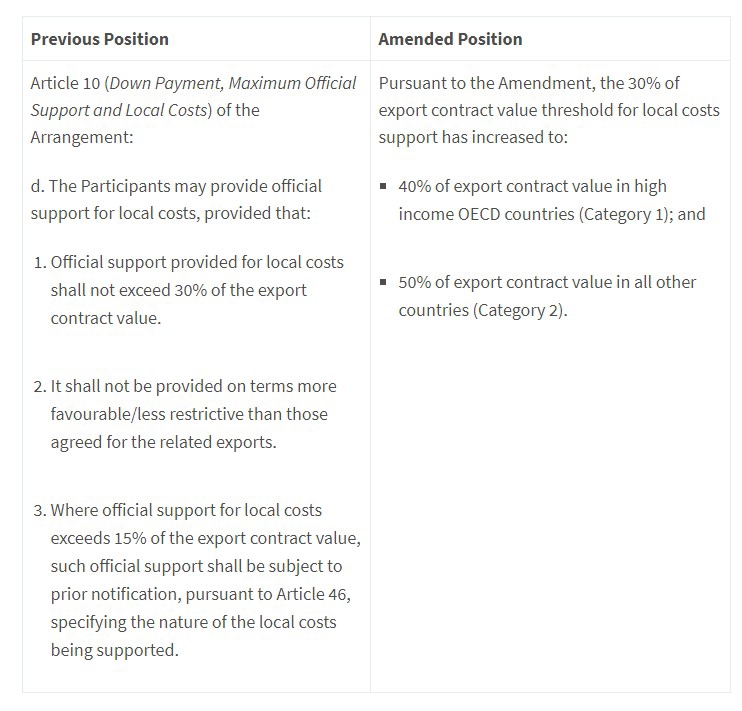 Given the ever evolving global trade and financing landscape, the Amendment is a positive, welcome development that fits in with current market practicalities, namely:

Governments, particularly in emerging markets, that are procuring large scale infrastructure projects will often require preferential treatment for domestic entities through the inclusion of a minimum percentage of national participation in the request for proposal (RfP) for that infrastructure project. This Amendment will be of particular benefit to buyers located in jurisdictions with localisation requirements that exceeded the prior 30% limit.

Next Steps An updated version of the Arrangement reflecting the changes discussed above is expected to be formally published in July 2021 (notwithstanding that the changes take effect as of 20 April 2021). Many industry participants have speculated that this Amendment will be the first step towards further amendments to other key areas of the Arrangement, such as repayment terms and down payments.