On September 27, 2018, EPA (the Agency) released a pre-publication copy of the final rule establishing “user fees” for the administration of the Toxic Substances Control Act (TSCA) (15 U.S.C. § 2601 et seq.). This rulemaking is one of the four “framework” rules promulgated by EPA as part of the implementation of the Frank R. Lautenberg Chemical Safety for the 21st Century Act (LCSA). The rule became effective October 1, 2018.

Section 26(b) of TSCA authorizes EPA to collect fees for certain TSCA activities from chemical manufacturers, importers, and processors, and establishes provisions for auditing, fee adjustments and refunds, and considerations for fee allocation and small businesses. The purpose of such fees is to defray a portion of the costs associated with:

These fees defray both intramural (EPA staff) and extramural costs (i.e., contractor costs). In the rule, EPA established user fees for manufacturers and importers that:

The rule allows EPA to collect fees from processors in limited scenarios, such as when a processor submits a significant new use notice (SNUN), when a fee-triggering section 4 activity is tied to a SNUN submission by a processor, or when a processor joins a consortium.

As EPA indicated in the proposed rule, EPA expects to collect approximately $20 million in average annual fees (excluding fees for manufacturer-requested risk evaluation). For manufacturer-initiated risk evaluations, EPA expects to collect $1.3 million annually for chemicals in the TSCA Work Plan, and $3.9 million for chemicals not included in the Work Plan. 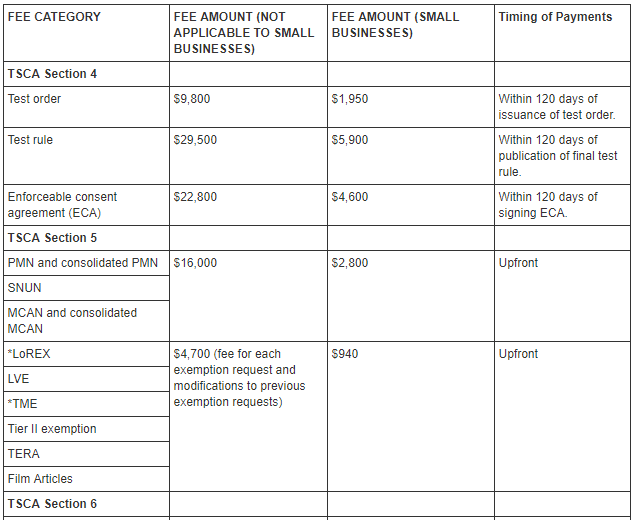 For submissions under section 5, EPA retained its proposal to assess the same fee for individual pre-manufacture notices (PMNs) as consolidated PMNs to keep a “practical, implementable TSCA fee structure”, and for simplicity. However, consolidated PMNs are still limited to up to six chemical substances.

The Agency also finalized its proposed provisions for refunds and stated that it plans to issue full refunds for:

EPA will issue partial refunds, or 75% of the fee amount, if a TSCA section 5 submission is withdrawn during the first 10 business days after the beginning of the applicable review period.

EPA finalized several provisions from the proposed rule, including the methodology for calculating fees (other than manufacturer-requested risk evaluations), program cost estimates, fee categories, payment through consortia, small business provisions, and the provision for refunds. However, EPA also made some changes from the proposed rule. One of the major changes is that EPA established a new process for identifying manufacturers subject to fee rules under TSCA section 4 (test rules), as well as EPA-initiated risk evaluations under section 6. EPA originally proposed to rely on Chemical Data Reporting (CDR) information and self-identification from manufacturers not subject to CDR reporting. However, in the final Fee Rule, EPA establishes a new process for identifying the universe of manufacturers, which includes:

If EPA receives a certification statement that a manufacturer has ceased manufacturing the substance in question, prior to the date the prioritization process is initiated for the chemical, and will not manufacture for 5 years into the future, or they have not manufactured the chemical in the five years preceding publication of the preliminary list, then the manufacturer will not be obligated to pay the fee.

Industry Consortia and Allocation of Fees

It is critical for companies impacted by this Fee Rule—including manufacturers, importers and processors—to carefully review the new fee requirements, as they apply to activities and submissions on or after Oct. 1, 2018.