The federal government has proposed controversial new rules to govern approvals for projects, including many Major Energy Projects. The pace and direction of future development of Canada's energy sector could lie in the balance.

Federal review processes for Major Energy Projects1 have, over the last decade or two, become lengthier, more controversial and less predictable. In response, the federal government adopted a series of measures aimed at controlling the length of those processes. These measures have included informal guidelines, directives and service standards and more recently formal legislated timelines to govern project reviews2.

The use of legislated timelines to constrain the length of federal review processes is continued in Bill C-69, which introduces the federal government's proposed Impact Assessment process. The legislated timelines, and their rationale, are laid out in the 2018 Timeline Consultation Paper3:

To ensure predictability for Indigenous groups, provinces, stakeholders and the public, legislated timelines would be established for each phase of federal assessments. . . clarity on how [those] timelines will be managed will ensure greater predictability4. 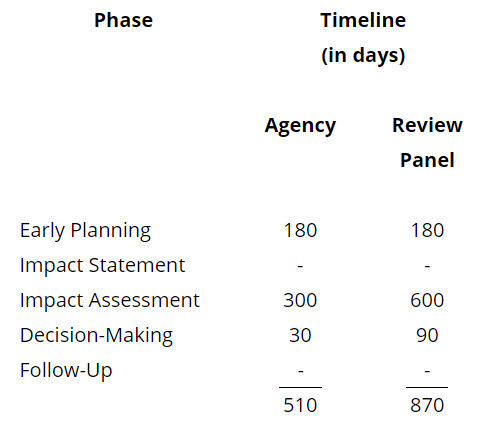 The Impact Assessment Act proposes a new timeline of up to 180 days for the planning phase. It would begin when a proponent submits an initial description of the designated project to the Agency and ends when the Agency issues the notice of commencement and provides the proponent with Tailored Impact Statement Guidelines.

Various submissions in response to the Timeline Consultation Paper from the proponent community have raised concerns that this is an entirely new phase in federal project reviews. Moreover, there is a great deal that must be accomplished in this planned 180 day timeline. Absent strict and compartmentalized timelines for each part of the Early Planning phase there is concern in the proponent community about whether the 180 day timeline for this phase can or will be consistently met.

The actual timing required to prepare an Impact Statement is not discussed at length in the Technical Guide. Submissions from the proponent community suggest this timing could vary widely – and could plausibly take up the better part of 3 years6. The time it takes for proponents to prepare an Impact Statement would depend, among other things, on the requirements for field studies, the amount of engineering and design information required and whether there are forms or filing manuals adopted to permit some of the most time consuming information to be prepared prior to the delivery of the Tailored Impact Statement Guidelines.

In any case though, whether this turns out to be a relatively expedited or a relatively lengthy process, it is not really an "add-on" to any timeline for a project review. The collection of the data required for an Impact Statement in one form or another is necessary in any assessment process and the proponent would need to take the time to assemble this information in any event regardless of the specific process design for project reviews.

Of particular interest to members of the proponent community is the nature of the public participation component during this Impact Assessment phase. Public comment periods, of the kind typically followed by the British Columbia Environmental Assessment Office or by the Federal Energy Regulatory Commission in the United States, are generally seen in the proponent community as more reasonable and expeditious than some of the more formal processes that have previously been followed, for example, by the National Energy Board. The exact nature of the public participation process will likely have to await the release of more detailed regulations and actual experience with a number of early project reviews.

Phase 4 is where a Decision whether or not to approve a project would be made either by the Minister or, for the more complex and controversial Impact Assessments, by the federal Cabinet. The Technical Guide notes (at p. 25) that any Decision by the Minister must be made within 30 days after the Impact Assessment Report has been posted. Any Cabinet Decision must be made within 90 days after posting the Report.

Finally, phase 5 is identified as Follow-Up, Monitoring and Compliance and Enforcement. Many of the responsibilities of this phase will customarily be performed after completion of construction and over the life-cycle of the project. However, one critical post-Decision responsibility in the Follow-Up phase is monitoring to ensure any necessary pre-conditions to a Decision have been complied with prior to any authorization to a proponent to commence actual construction. No specific timeline has been established for the completion of any portion of this Follow-Up phase. With the proliferation of conditions, both in terms of number and significance, and the monitoring of other pre-construction steps, a year or more can elapse between formal approval and commencement of construction7.

The federal government has said the timelines for the three fully regulated phases of the Impact Assessment system – the Early Planning, Impact Assessment and Decision-Making phases – will be between 510 to 870 days. That equates to roughly 18 to 30 months for the pure regulatory portion of the process.

Add to that, however, the time (up to 3 years or 36 months) required to prepare an Impact Statement meeting the requirements of any Tailored Impact Statement Guidelines, and the timeline from first filing to receipt of an approval could be in the range of 5 years or more (60 to 66 months). Any additional post-approval but pre-construction steps, broadly included in the Follow-Up phase but not subject to timeline limits, would be in addition to this.

This view of the potential time that a federal project review process could take is shared by various members of the proponent community, notably including the Canadian Nuclear Association8:

The government's own timelines estimate 5 years of federal time for a Joint Review Panel assessment. Our members believe it will be significantly longer.

Still it wouldn't be quite fair to say that the proposed Impact Assessment review process will necessarily represent a significant increase in the timeline for project approvals. The pure regulatory time, projected to be about 30 months subject to extensions, would be roughly competitive with other comparable jurisdictions and is not all that different from the timelines contemplated in CEAA 2012. And the period – about 36 months but possibly less – for preparing an Impact Statement is not properly described or considered as additional approval time. That kind of data collection and analysis has to be done now for Major Energy Projects – but currently tends to be done on a pre-filing basis, often prior to any announcement of a decision to proceed to obtain regulatory approvals.

A review of submissions from the proponent community in response to the Timeline Consultation Paper shows a few areas of particular concern about applicable timelines, including:

We have also noted a variety of comments in submissions from the proponent community warning of the potential competitive impacts of adopting the proposed Impact Assessment system – unless it is carefully implemented to ensure the proposed legislated timelines are actually met. To that end, there is considerable support to ensure that, after the Impact Assessment system comes into being, there is a sustained effort by federal authorities to track the actual timing performance of the new system and to benchmark the results against the project review processes in comparable and competing jurisdictions.