Tackling the Salary Cap - should the rules be sin-binned after Salarygate?
Blog Sports, Media and Entertainment Online

The Saracens case has generated the biggest media storm in rugby union since Bloodgate in 2009. But what is the legal basis for the salary cap? Does Salarygate suggest that the existing rules are working? If not, what recommendations for improvement might Lord Myners make in 2020?

What is the legal basis for the Salary Cap Regulations?

- To ensure the financial viability of all clubs and of the Gallagher Premiership competition;

- To provide a level playing field for clubs;

- To ensure a competitive Gallagher Premiership competition; and

- To enable clubs to compete in European Competitions [3].

The Salary Cap Regulations set out the specific remedies that the clubs and PRL have agreed should apply for any established breaches of the rules [4]. These sanctions vary according to the severity of the breach, but all breaches must be proved to the usual English civil law standard of on the "balance of probabilities" [5].

As to forum, any dispute regarding the Salary Cap Regulations shall be resolved via arbitration, not litigation. However, Saracens were sanctioned by a disciplinary panel, which is effectively a pseudo-arbitration process used to determine whether or not more serious breaches have occurred (with limited grounds for a subsequent appeal via arbitration) [6].

The Salary Cap Regulations may be challenged as a restraint of trade or as an anti-competitive arrangement because they arguably restrict the ability of clubs to compete for the services of players and the ability of players to ply their trade.

Saracens recently argued that the Salary Cap Regulations are invalid "on competition law grounds", but the independent panel concluded that "the salary cap operates in a pro-competitive manner" [7]. Whilst the panel’s decision is not legally binding, and details of Saracens’ legal arguments and the decision have not been published, it appears that a distinguished trio of English lawyers (including Lord Dyson, the former Master of the Rolls and Justice of the Supreme Court) concluded that the Salary Cap Regulations are legally enforceable.

In future cases, it will be intriguing to see whether other clubs – or even the players themselves – decide to attack the level of the salary cap, rather than the existence of a salary cap per se. For instance, a club might argue that the cap in England – £6.4 million for the 2019/20 season [8] – is anti-competitive because it does not, say, allow English clubs to compete with French clubs for top level players given the higher salary cap that operates in France (currently €11.3 million (£9.5 million).

Does Salarygate show that the Salary Cap Regulations are working?

Saracens have been robustly punished with the maximum points deduction under the Salary Cap Regulations, which means they could end up being relegated despite their galaxy of international stars. Saracens’ £5.36 million fine is also stringent – it represents a penalty of 29.9% of their annual turnover [9], which, in context, is almost three times more severe than the maximum punishment for anti-competitive behaviour under EU law (10% of turnover).

However, Saracens’ sporting punishment is arguably not severe enough, since Saracens will retain their 2017/18 and 2018/19 Premiership titles and they may avoid relegation precisely because they have a top class squad of well-paid players.

As to financial performance more widely, 11 out of the 12 Premiership clubs recorded a financial loss in 2017/18, with only Exeter Chiefs making a profit. While most clubs increased their turnover in 2017/18, the clubs collectively lost nearly £50 million, with player wages typically comprising the highest proportion of each club’s expenditure [10]. This indicates that the clubs’ collective costs are still too high despite the Salary Cap Regulations.

Similarly, as shown in Table 1 below, the competitive balance at the very top of the Premiership has declined in the past five seasons, albeit competition is improving further down the table:

- Saracens have won 4 out of 5 Premiership titles since 2014/15 (two of which were won while breaking the Salary Cap Regulations). Exeter Chiefs won the other Premiership, and one or both of Saracens and Exeter have been in every Premiership final since 2015. By contrast, in the five seasons from 2009/10 to 2013/14, four different teams won the Premiership (Leicester Tigers twice, Saracens, Harlequins, and Northampton Saints).

- Similarly, the gap at the top of the table (between 1st and 4th place) has steadily widened from 8 points to 30 points in the past five seasons.

- However, the gap between 4th to 8th places – which covers the annual battle for the last semi-final spot (4th place) and the last European Champions Cup place (6th place) – has narrowed in the past five seasons, indicating that competition is fierce at this level.

- Equally, the gap between the top and bottom clubs has narrowed in recent seasons, with the bottom clubs improving their performance as a percentage of the league winner’s points tally.

Saracens’ conduct and the panel’s decision are still not public because proceedings under the Salary Cap Regulations are confidential, which includes "the issues in dispute, the evidence and arguments presented by the parties and any decision reached" [11]. This lack of transparency has fuelled an unhelpful degree of speculation and misunderstanding as to what Saracens did or did not do, and how the salary cap works.

Lord Myners should recommend that the Salary Cap Regulations are amended to allow the decisions of independent panels (and appeal panels) to be published in full, or in redacted or anonymised form (to comply with data protection laws). This would improve transparency by boosting all stakeholders’ understanding of the Salary Cap Regulations, and promote consistency in the interpretation and application of the rules. PRL could also follow the Court of Arbitration for Sport’s recent example, and allow for disciplinary (and appeal) hearings to be held in public by the agreement of the parties and/or at the sole request of a disciplined club [12].

PRL may consider implementing more stringent penalties to increase the deterrent effect of the rules. But what is the appropriate balance between sporting and financial penalties? Does it make sense to fine a club that has the financial resources to flout the salary cap?

Tougher penalties could include automatic relegation for serious breaches of the salary cap, or the retrospective removal of titles (which happened to Melbourne Storm in the NRL in 2010). Similarly, PRL could re-distribute fines for all breaches of the Salary Cap Regulations amongst clubs who comply with the rules [13]. Clubs in most financial difficulty, or clubs struggling competitively, could receive a greater proportion of the fines, so one club’s breaches would directly benefit other clubs. PRL could also require club executives to make statutory declarations as to their club’s compliance with each season’s salary cap (which are required in the NRL at the start and end of each season) [14]. If so, signing a false declaration could result in an action for perjury – not just disciplinary action – which should incentivise full compliance with the rules.

3. Bind the players to the rules

The Salary Cap Regulations only apply to the clubs – not the players – despite players’ wages being the subject of the salary cap. PRL could require players to be directly subject to, and be disciplined under, the Salary Cap Regulations (as they are in leading US and Australian sports). In the AFL, players are even required to provide statutory declarations as to their own compliance with salary cap rules as a pre-condition for their registration [15]. Premiership players already declare their annual salaries for taxation purposes, so it should be straightforward for them to do the same for rugby reasons.

If Premiership Rugby and the clubs are committed to achieving financial stability and competitive balance, then radical change is required because the current Salary Cap Regulations are structurally weak – they do not bind the players and they contain fewer restrictive measures than the salary caps typically applied in major US and Australian sports under competitive bargaining agreements ("CBAs") [16].

In a more radical move, Lord Myners could recommend that the Premiership should adopt its own collective agreement, which would be a comprehensive contract governing the sporting and commercial relationships between the players and the Premiership. With the Premiership due to re-negotiate its broadcasting deals in 2021, Salarygate may present an opportunity for structural reform that would leave the Premiership well-placed to benefit from an anticipated growth in broadcasting revenues.

Significantly, a properly negotiated collective agreement would be exempt from EU competition law [17], thus allowing PRL to implement a wider range of restrictive measures to promote a level playing field and to control costs. Based on CBAs in the US and Australia, the Premiership could use a collective agreement to introduce a salary collar (i.e. minimum and maximum spending), a minimum player wage, a player draft system, a fixed squad size, a closed league, and a mechanism for paying players a portion of the Premiership’s revenues (rather than clubs being responsible for salaries). Not all of these features would easily translate into the Premiership, but more firepower is required to make the Premiership financially sustainable and competitive in the long term.

A collective agreement would be controversial. It would require an overhaul of the current contractual framework, which would increase the players’ influence, and concentrate power into the hands of PRL at the clubs’ expense. PRL would also need to act increasingly in the interests of the Premiership as an independent entity, rather than what still remains a loose amalgamation of clubs. However, a collective agreement could be the cornerstone for a new era, in which the Premiership could transform itself into a sporting and commercial powerhouse.

Indeed, Lord Myners should be inspired by the example of the AFL in Australia. Underpinned by a CBA containing a salary cap, the AFL has expanded beyond its traditional heartlands in Victoria and South Australia to become a national game, achieving the Premiership’s dream scenario of a competitive league and commercial success. In 2019, three teams finished the AFL regular season tied on the same number of points at the top of the ladder, and the next two sides were tied just four points behind. The top five sides were only separated by a single win. In the past five seasons, there have been four different Grand Final winners, and eight different Grand Finalists [18].

In the wake of Salarygate, perhaps Lord Myners will decide that the Premiership’s future should come from a land down under? 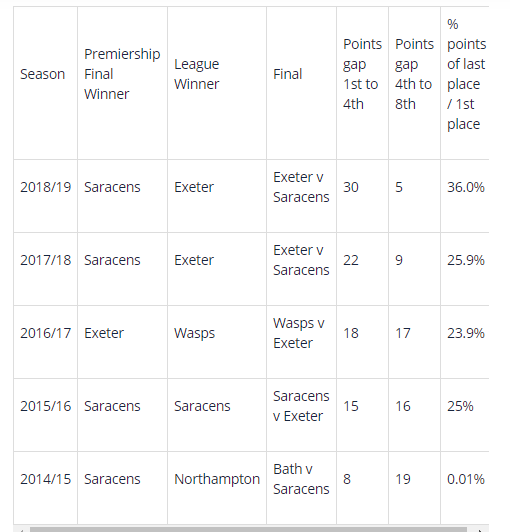 { The Salary Cap Regulations deserve a stint in the sin-bin because they are not achieving their own goals of financial stability and competitive balance. If Premiership Rugby and the clubs are committed to achieving financial stability and competitive balance, then radical change is required because the current Salary Cap Regulations are structurally weak.