To carry out the executive order, the Department of Commerce established a Regulatory Reform Task Force (“Task Force”), comprising, among others, agency officials from the National Oceanic and Atmospheric Administration, the Bureau of Industry and Security, and the USPTO. To support its efforts on the Task Force, the USPTO then created a Working Group on Regulatory Reform, charged with reviewing the USPTO’s regulatory practices and suggesting opportunities for reform.

The USPTO’s most recent proposals for streamlining its regulations include eliminating those regulations governing 1) reservation clauses in patent applications; 2) petitions from the refusal of a primary examiner to admit an amendment; 3) the publication of amendments to the regulations; and 4) the limits that the Director can impose on the number of inter partes reviews and post-grant reviews heard by the PTAB. Each is addressed in further detail below.

1. Regulation: 37 C.F.R. § 1.79 prohibits a pending patent application from containing a reservation for a future patent application of subject matter disclosed, but not claimed, in the pending application. This regulation dates back to a time when claiming priority to a prior application was still a developing and unsettled practice.

Reasons for Removal: The USPTO found that this round-about way of getting to 37 C.F.R. § 1.181 through another rule was unnecessary. 37 C.F.R. § 1.181 is sufficient to stand alone, and makes clear that a refusal by a primary examiner to admit an amendment, in whole or in part, is petitionable.

2. Regulation: 37 C.F.R. § 1.351 states that all amendments to the regulations in 37 C.F.R. part 1 will be published in the Official Gazette and in the Federal Register.

Reasons for Removal: The Administrative Procedure Act (APA) generally requires the USPTO to give public notice of any regulatory change, and guidance from the Office of Management and Budget (“OMB”) makes clear that publication in the Federal Register is the means to provide such public notice. Furthermore, the USPTO notes that it intends to continue its practice of publishing all amendments in 37 C.F.R. part 1 in the Official Gazette. Thus, even with removal of the regulation, the USPTO will continue to publish all changes to the rules just as before.

3. Regulation: 37 C.F.R. § 42.102(b) and § 42.202(b), respectively, provide that the Director may impose a limit on the number of inter partes reviews and post-grant reviews that may be instituted during each of the first four one-year periods that the Leahy-Smith America Invents Act (AIA) is in effect.

Reasons for Removal: Both of these regulations are now out of date because the fourth anniversary of the effective date of the AIA has passed.

The following table provides a summary of the proposed rule changes. The Federal Register notice specifies that written comments on the changes must be received on or before February 20, 2018. 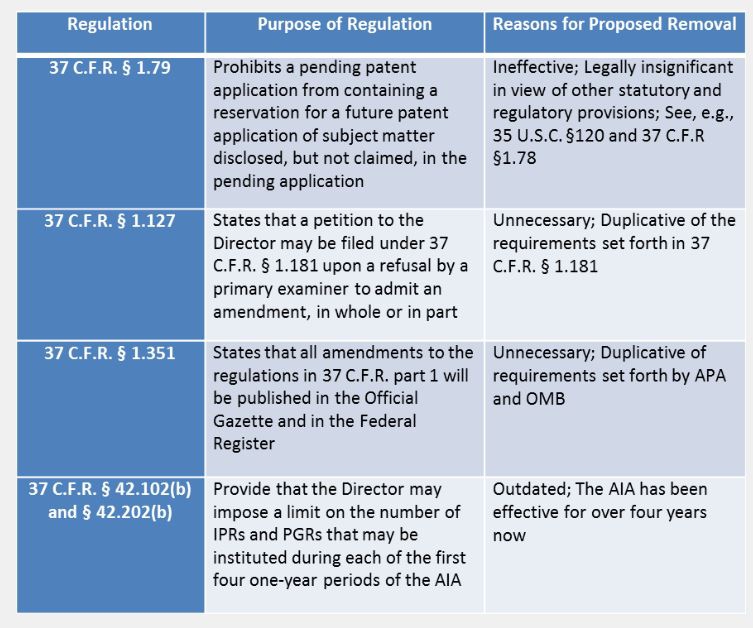