The new horizons of directors’ liability

Today’s companies and their Boards face a myriad of potential corporate crises or major incidents.

If an organisation encounters a technology breach or outage, workplace or environmental incident, is subject to aggressive regulatory action or finds itself caught up in a terrorist attack or natural disaster, the digital news era leaves no room for error. The risks and consequences underpin the critical importance of preventative measures and advance crisis planning. Failure to respond swiftly and confidently can have a devastating impact on a company’s reputation and viability. An ineffective response to a major incident will almost certainly see stakeholders question the Board’s ability to provide effective oversight and governance.

These external pressures come on top of directors’ personal liability for the performance of their functions. Combined, they make it vital for directors and senior executives to consider their own legal obligations, and the company’s legal and public responses, in building a robust crisis management plan.

A majority of respondents (53.9%) to KWM’s 2019 Directions Survey considered their organisation ‘well prepared’ to effectively mobilise and respond to an incident, but acknowledged they could do better - less than 4% described themselves as ‘fully prepared’. Just under 30% were unsure, while 15% felt they were not very, or not at all prepared.

How prepared is your organisation to effectively respond to a crisis? 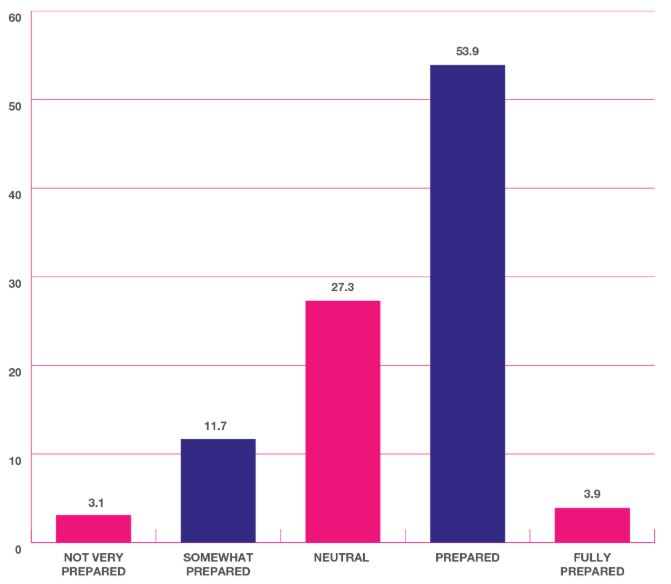 What kinds of crises do directors fear?

Interestingly, the picture changes dramatically when asked how prepared organisations are regarding specific crisis risks, such as climate or cyber issues – 61.0% believe cyber attacks are likely to have a high reputational impact - making them the number one crisis concern.

Major safety incident was the next most widely-held fear – an area of concern for 44% of our survey respondents. Environmental/contamination incident was 4th on the list, an issue for 32% of respondents, behind a change of law and policy (41%).

Thinking about major incidents likely to have a high reputational impact, which areas are of concern?

This article focuses on directors’ preparedness in the context of two of the high ranking issues – workplace, and environmental incidents.

Recent prosecutions and significant legislative changes (including the introduction or proposed introduction of industrial manslaughter laws in many States) make it imperative that directors and senior executives are abreast of developments in relation to their personal obligations in respect of workplace safety.

To ensure they can positively demonstrate compliance, directors must ensure they have well-developed & documented systems in place. Without documentary evidence to establish what steps have been taken, a director is exposed to personal prosecution.

Can insurance cover you?

Potentially more significant are proposed amendments to New South Wales WHS laws, which would make it an offence for a person to enter into, provide, or benefit from insurance or indemnity arrangements for liability for a monetary penalty for a WHS offence. Directors and officers of a body corporate will be liable for offences committed by the body corporate.

The legality of insurance for WHS offences has long been questioned, given the widely accepted view that insurance policies purporting to indemnify against criminal conduct are void against public policy. However, to date, insurers have continued to offer insurance policies covering this risk.

While the changes will be retrospective – insurance cover for incidents occurring before the commencement of this legislation is not unlawful – it will be important to ensure that no new contracts of insurance or other grants of indemnity are made. Directors must be aware it will also be unlawful to seek indemnity under an existing policy for an incident that occurred after the changes commence.

The NSW reforms follow recommendations made in the national review into model WHS laws. So far, NSW is the first State moving to ban insurance and indemnity arrangements for WHS offences. Will others follow suit?

Directors and senior executives ought be aware that recent reforms to environmental law in several Australian jurisdictions have created new director and officer liability provisions, including criminal and civil liability, and positive obligations to exercise due diligence.

The Commonwealth Environment Protection and Biodiversity Conservation Act 1999 is also subject to an independent review which commenced at the end of October this year.[4] Some provisions of both State environmental legislation and the EPBC Act create executive officer criminal liability, if the regulator can prove the following elements (including a mental element). The list of factors outlined below provides good insight for directors and officers wanting to understand regulators’ expectations regarding environmental due diligence. For example, s.495 EPBC Act:

To determine what amounts to ‘reasonable steps’, the Court will ask:

Questions for the board

Regardless of how well-prepared they feel, directors and officers can take steps to mitigate all types of crisis risks (and potential consequences) by answering some basic questions:

The questions to ask when devising a new health app