Sustainable finance is the provision of finance to investments taking into account environmental, social and governance considerationsi.

The recent growth in sustainable finance is seen by many experts as a response by governments seeking to comply with and reach the targets set by the Paris Agreement (a legally binding, global agreement on climate change as agreed in Paris on 12 December 2015). Some other reasons attributed to the growth in sustainable finance (from both an Irish and EU perspective) include:

Green bonds are becoming an increasingly prevalent form of sustainable finance. According to the Climate Bonds Initiative, the global green bond market reached $162 billion in 2018 and is estimated to reach $300 billion in 2019v.

In October 2018, Ireland became the fourth EU country (alongside France, Belgium and Poland) to issue a green bond aimed at funding environmental investments. According to the National Treasury Management Agency (the “NTMA”), the proceeds of the green bond are to be used in accordance with the Irish Sovereign Green Bond Framework (the “ISGB Framework”), which was published by the NTMA as a pre-requisite to issuing a sovereign green bond. The ISGB Framework sets out how proceeds from Irish Sovereign Green Bond issuance will be allocated against eligible green projects. According to the ISGB Framework this will primarily address climate change mitigation and adaptation, clean water and wastewater treatment, countering natural resources depletion, loss of biodiversity and the reduction of air pollutionvi. The ISGB Framework aligns with the core components of the Green Bond Principles (2018) as developed by the International Capital Market Association.

According to the GLP, green loans are defined as “any type of loan instrument made available exclusively to finance or re-finance, in whole or in part, new and/or existing eligible Green Projects”. “Green Projects” are defined by reference to a non-exhaustive list of eligible categories set out in Appendix 1 to the GLP. Indicative categories of eligibility for Green Projects include production and transmission of renewable energy, pollution prevention and control, sustainable natural resources management, biodiversity conservation, climate change adaptation and green buildings.

In addition to the above, according to the GLP, the green loans must align with the following four core components:- 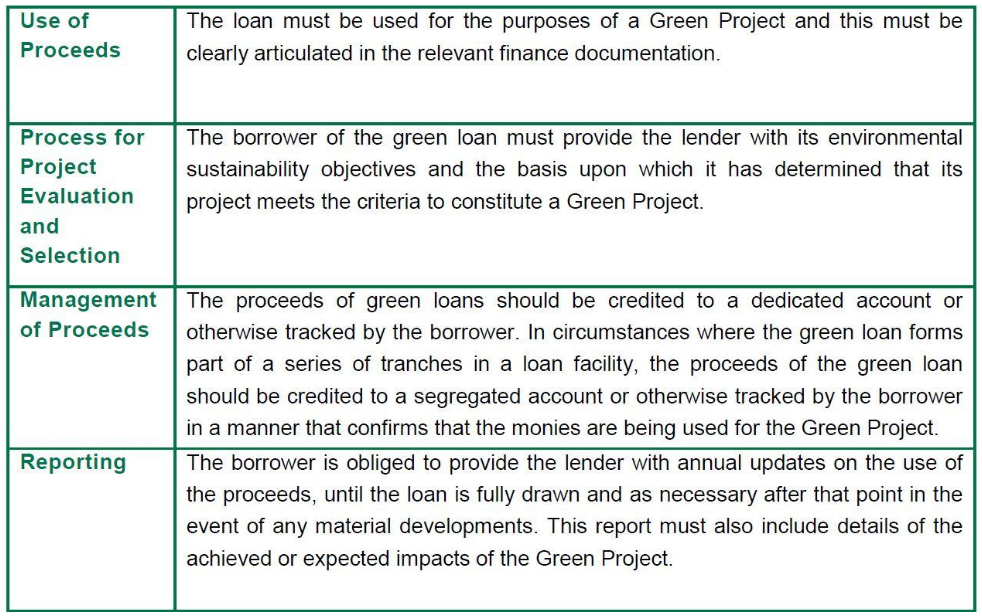 These voluntary recommended guidelines are to be applied on a deal-by-deal basis depending on the underlying characteristics of the transaction. The LMA hopes that the issuance of the GLP could be the catalyst to developing a robust green lending market.

Sustainable Finance and Opportunities for Ireland

As it stands, sustainable finance forms a key strategic priority in Ireland’s International Financial Services strategy, the ‘IFS 2020’. Sustainable finance is naturally complementary to Ireland’s existing expertise and reputation for highly rated international financial services. Euronext Dublin has established itself as the exchange of choice for many leading international listings of debt and the development of European green bond standards will lead to further growth.

Recent recognition of Dublin as a hub for sustainable finance was the establishment by Financial Centres for Sustainability (FC4S) of its European base in Dublin in August 2018. This sees Dublin line up with cities including London, Frankfurt, Paris, Toronto, Hong Kong, Shanghai and Zurich as key hubs for sustainable finance and investment.

It is likely that sustainable financial services shall expand to encompass the banking, capital markets, insurance and investment sectors in the EU, and particularly Ireland, in order to fully meet the imposed targets and the challenges of climate change. Such expansion creates an opportunity for Ireland to lead the way in delivering significant impact in critical areas such as a sustainable financial system.