Private equity deal value hit a post-crisis high through the first three quarters of 2018—climbing 2.3% compared to the same period last year to reach US$405 billion. Strong performance by PE has made it an attractive asset class for investors, ensuring that capital has continued to flow into PE funds. 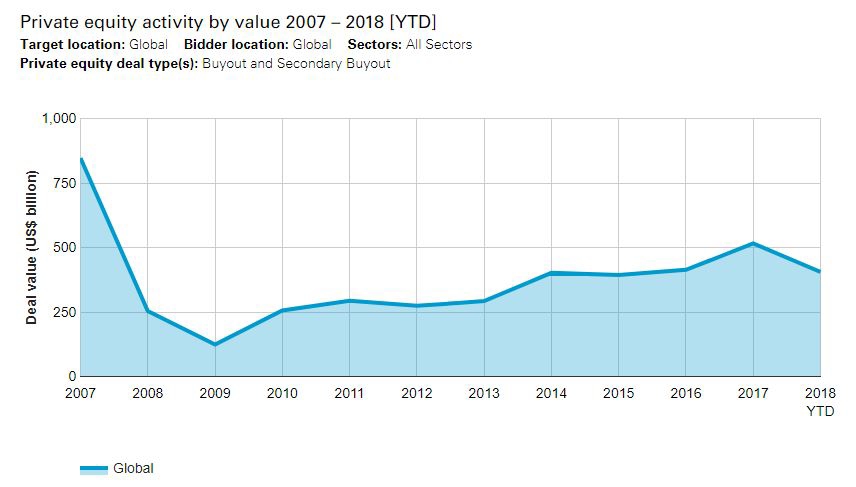 According to research firm Preqin, the PE industry had more than US$3.06 trillion of assets under management at the end of 2017—a fifth higher than the previous year. Dry powder available for investment now stands in excess of US$1 trillion.

With large war chests in need of deployment, PE firms have become increasingly active players in the M&A market. Each of the five largest deals recorded in the quarter was valued at more than US$3 billion, demonstrating the industry’s vast firepower and willingness to make big investments in established companies with high-quality earnings.

Carlyle Group, for example, agreed to pay US$6.7 billion for Sedgewick Claims Management from a consortium of investors led by KKR in a secondary buyout. The claims management company has expanded internationally and broadened its service offerings since KKR first backed the firm in 2014.

PE firms have also seized opportunities to carve assets out of corporations that are merging and need to divest to satisfy regulators. CVC Capital Partners announced a club deal with Messer Group to buy the North American gases division of chemicals group Linde in a US$3.3 billion transaction that will help facilitate Linde’s planned US$83 billion merger with Praxair.

The large cache of dry powder, however, is pushing up valuations and making it tougher for financial buyers to win deals and deploy capital at reasonable prices. This could be one explanation for the 3% year-on-year fall in deal volume in Q1-Q3 to 2,532 deals.

According to a report by Bain & Co, leveraged buyout purchase price multiples have hit a record 11.2x average Ebitda. Expensive pricing and fierce competition for assets has seen PE firms focus their efforts on the highest-quality assets and step away from deals with any wrinkles.

This trend is supported by Thomson Reuters data showing that the number of withdrawn deals for the year stood at 668 in August, the largest volume seen in the first eight months of the year since 2009.

PE firms are identifying and targeting high-performing assets early, and then running hard at these deals by offering attractive prices to sellers. Carlyle, for example, made a higher offer for Sedgewick than fellow bidder Hellman & Friedman.

According to Preqin, PE managers are returning more capital to investors than they are calling up for investments: In 2017, private equity returned US$466 billion to investors and called up US$430 billion. This trend suggests that at least over the medium term, PE firms will continue to receive strong investor backing, which in turn will support ongoing buyout activity. But it also suggests that more money will continue to chase relatively fewer deals, ensuring that—absent an economic downturn— asset prices will remain high.