Many older adults are caught up in the nation’s opioid epidemic. From 2002 to 2014, opioid misuse doubled among Americans ages 50 and older.1Experts indicate that older adults are at increased risk of opioid misuse because of their higher rates of chronic pain due to acute or chronic illness or injury. Older adults also may be at higher risk of complications related to opioid use, including an increase in the likelihood of falls and potential risks due to concurrent use of other medications, such as benzodiazepines.2The perception that older adults are less prone to addiction can also be a barrier to addressing the opioid epidemic in this population. 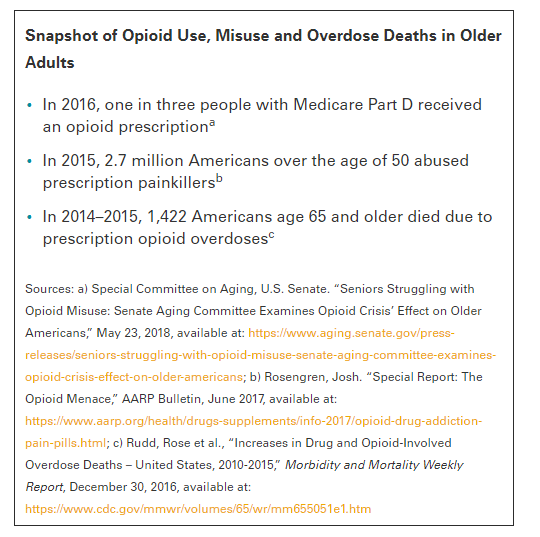 The impact of the opioid epidemic on older adults makes Medicare a key player in fighting the epidemic. To help reduce the number of individuals newly developing an opioid addiction, federal and state policymakers are focusing on reducing opioid prescribing, along with encouraging the use of alternative pain management methods. In the 2019 Call Letter, which outlines policies for Medicare Advantage and Part D plans, the Centers for Medicare & Medicaid Services (CMS) indicated that plans must limit initial opioid prescriptions for the treatment of acute pain to a seven-day supply and alert pharmacists about concurrent use of opioids and benzodiazepines, among other policies.3 H.R. 6, the Substance Use Disorder Prevention That Promotes Opioid Recovery and Treatment for Patients and Communities Act (the “SUPPORT Act”), passed by the Senate October 3 and awaiting the president’s signature, includes many provisions impacting Medicare. 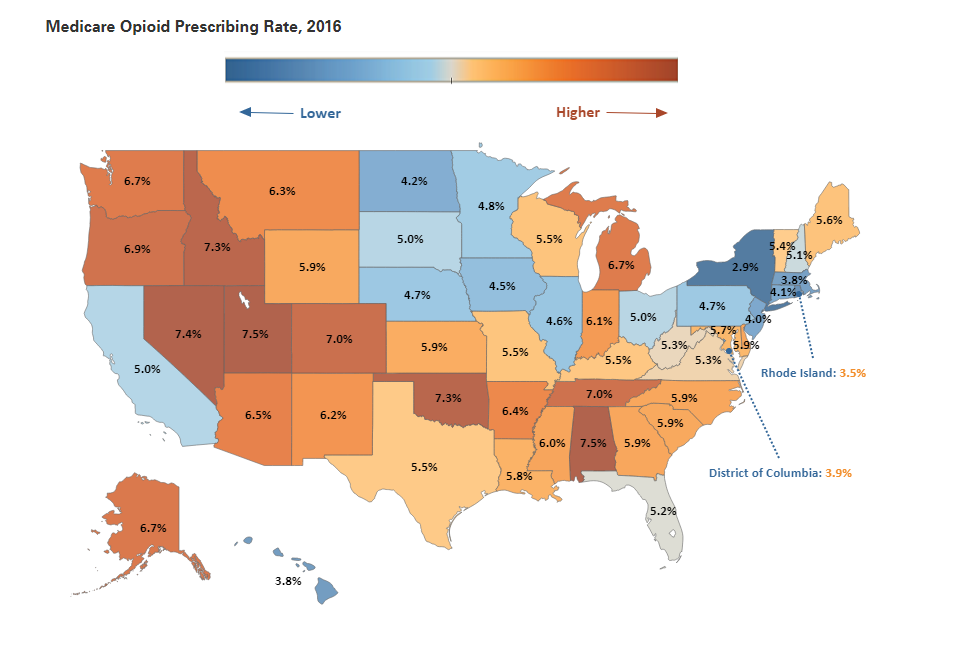 The same analysis found, however, that opioid prescribing rates vary noticeably across states. For example, in 2016, New York’s 2.9% prescribing rate was less than half the 7.5% rate in Alabama, Idaho, Nevada and Utah. The differences in state prescribing rates may reflect different treatment norms or state policies on opioids and indicate that there may be room for further declines in opioid prescribing in states that currently have higher rates. (See “Medicare Opioid Prescribing Rates Vary Widely Across the U.S.” in the April issue of “Health Update.”)

These disparate results appear to indicate that while the total number of opioid prescriptions for Medicare beneficiaries is declining, more beneficiaries may be taking opioids. This finding could mean that the long-term use of opioids for chronic pain with multiple prescriptions over time has declined, but initial treatment with opioids for acute pain is still occurring at rates higher than may be necessary, given alternative pain management treatment options.