Will an English judgment be enforceable in the EU27 post-Brexit? 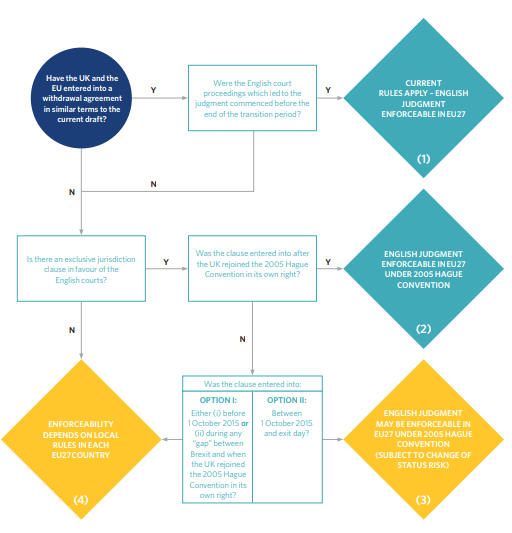 This decision tree has been prepared as a quick reference guide to help determine whether an English court judgment will be enforced in EU27 countries post-Brexit.

It is necessarily a simplification of complex issues and should be read with reference to the notes set out below.

The draft withdrawal agreement between the UK and the EU dated 14 November 2018 provides (at article 67) that current rules on both jurisdiction and enforcement of judgments under the recast Brussels Regulation (Regulation 1215/2012) will apply where proceedings are commenced before the end of the transition period established by the agreement (31 December 2020).

Accordingly, if the UK and the EU have entered into a withdrawal agreement in those terms, and if the English court proceedings which led to the judgment were commenced before the end of the transition period, then the judgment will be enforceable in the EU27 under the recast Brussels Regulation (subject to limited exceptions).

The UK is currently a party to the 2005 Hague Convention on Choice of Court Agreements by virtue of its EU membership. That will come to an end when the UK leaves the EU, but in the event of a no-deal Brexit the UK intends to re-join the Convention in its own right. The UK deposited its instrument of accession to the Convention in December 2018 so that it would re-join with effect from 1 April 2019 (the Convention comes into force on the first day of the month following three months from deposit of the relevant instrument). It is not yet clear, however, how the intended delay to the UK's departure from the EU (to at least 12 April 2019) will affect the date on which the UK is able to re-join the Convention in its own right.

Hague applies only where there is an exclusive jurisdiction agreement in favour of a contracting state's courts, and only where that clause was entered into after the Convention came into force for the chosen state. It also does not apply to consumer or employment contracts or to certain other matters for example relating to land or certain intellectual property rights. Where Hague applies, a judgment will be enforceable (subject to limited exceptions) in the other contracting states, which includes all EU27 states.

Accordingly, if the withdrawal agreement has not been entered into, and if the English court's judgment was given pursuant to an exclusive English jurisdiction clause that was entered into on or after the UK has re-joined Hague, then the judgment will be enforceable in the EU27 under that Convention.

(The UK's declaration made with its instrument of accession indicates that, if the withdrawal agreement is entered into, the UK will withdraw its instrument of accession to Hague and, during the transition period, will be treated as an EU member state for the purposes of the Convention. Once the transition period comes to an end, the UK will presumably re-join Hague and may in that period also have agreed other arrangements with the EU in relation to jurisdiction and enforcement. These may include for example that the UK will participate in the Lugano Convention, in which case English judgments will be enforceable in the EU27, as well as Iceland, Norway and Switzerland, in similar circumstances to the present.)

As noted above, the 2005 Hague Convention on Choice of Court Agreements applies only where there is an exclusive jurisdiction agreement in favour of a contracting state's courts which was entered into after the Convention came into force for the chosen state.

Hague came into force for the UK as an EU member state on 1 October 2015. However, as noted above, that will cease on Brexit. In these circumstances, there is some uncertainty over whether other contracting states will apply Hague rules where an exclusive English jurisdiction clause was agreed before the UK re-joined Hague in its own right, even if the clause was agreed when the UK was party to Hague by virtue of EU membership (ie between 1 October 2015 and exit day).

4 Enforceability depends on local rules in each EU27 country

If there is no applicable agreement or convention on enforcement of judgments, then each EU27 country will apply its own domestic rules to questions of jurisdiction and enforcement.

There are old bilateral treaties between the UK and a number of EU27 countries but, as these were expressly superseded by the Brussels Convention and the original and recast Brussels Regulations, it is not at all clear whether they will apply post-Brexit. In any event most (but not necessarily all) EU countries will enforce foreign judgments even without a specific reciprocal regime, although the type of judgment enforced may be more limited and the procedures involved more time consuming and costly.