Through Sunday, October 28, the 12th day of early voting in North Carolina, more than 1.2 million people – 17 percent of registered voters – have now voted by mail or in person, surpassing the final early voting totals in 2014 with a full week to go. The pace has fallen off presidential levels now, as expected, but it is readily apparent that early voting turnout will far surpass all previous midterms.

With 12 days of data for in-person ballots, we are getting a clearer picture of one-stop turnout and how the voter mix is different thus far in this election cycle than previous ones.

Last week we noted that total turnout would likely be in the range of 38 to 45 percent. With 17 percent turnout already, and a full week of early voting to go, it is hard to imagine turnout not eclipsing 45 percent. Remember, 2014 saw a high-profile U.S. Senate race – the most expensive in American history up to that point – and turnout fell just short of 45 percent. This year there are no high-profile races, yet turnout is not dropping off. 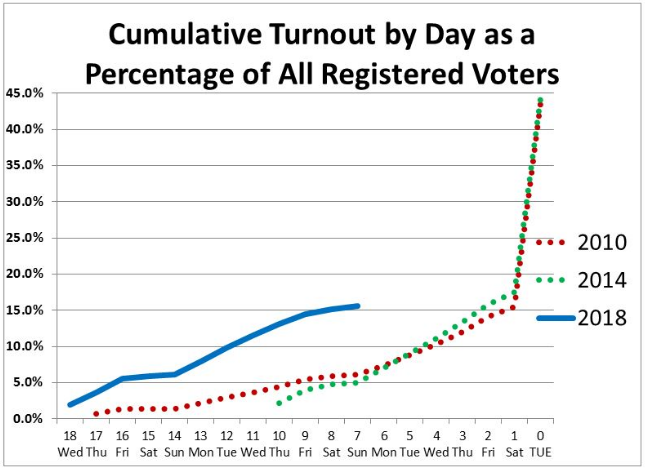 Here is the turnout mix thus far for in-person early voting compared to 2014 and 2016: 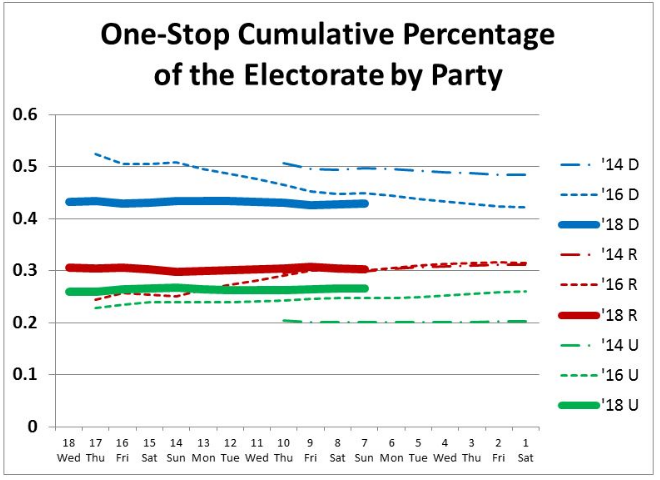 You may notice that Democratic vote share in previous election cycles decreased as early voting reached its conclusion on the Saturday before Election Day. Correspondingly, Republican and unaffiliated vote share increased. That has not been the case thus far in 2018. The vote share levels have remained almost flat. This is good news for Democrats, as early turnout numbers looked abysmal, comparatively, but have improved daily as compared to 2014 and 2016 … by simply remaining flat.