The last two months has seen an interesting give and take in the UK government's policy regarding clean technologies. The Clean Growth Strategy, Industrial Strategy and proposed changes to the Capacity Market rules provide a mix of good and bad news for clean energy developers and investors, particularly those in energy storage and related grid-edge sectors.

The first announcement back in October was the Government's Clean Growth Strategy.

At first glance, the Clean Growth Strategy promised to be a bit of a boon for grid-edge technologies – the strategy pointing to "unlocking significant expansion of interconnection, electricity storage, and demand side response" as a key pathway to the UK reaching emissions reductions of 80% by 2032. Yet on closer inspection, the 'Clean, Smart, Flexible Power' portion of the Clean Growth Strategy was largely a restatement of the Government's existing policy set out in July's Smart Systems and Flexibility Plan. With little shift in policy, planned regulatory changes and the National Grid's procurement reshuffle remain the prime bright policy lights on the horizon for the energy storage and grid-edge sectors.

For those in the wider renewables and clean energy industry:

The second announcement came toward the end of November, in the form of the Government's Industrial Strategy White Paper. Like the Clean Growth Strategy, the Industrial Strategy referred to the outcomes of the Smart Systems and Flexibility Plan as being key to the Government's aims of enabling the electricity system to work more flexibly and efficiently. The Faraday Challenge – the competitive scheme for rollout of £246 million in investment in battery technologies run through Innovate UK – will also play a key role. Although these plans were already previously announced, they at least maintain existing Government policy in the area and support longer-term investment decisions.

Perhaps the most significant new funding pledge for clean technology in the Industrial Strategy was certainly the Charging Infrastructure Investment Fund. This £400 million fund will be half-funded by the Government, with the remainder to be matched by private investors. This fund is in addition to the £100 million "plugin car grant" scheme, which aims to incentivise the purchase of battery electric vehicles and £40 million R&D funding (matched by industry) for new charging technologies. These announcements mesh with the Clean Growth Strategy announcements around smart transport systems (see our article here) and indicate the Government's continued focus on transport as a primary focus of its clean technologies policy.

The third announcement was less positive than the first two, albeit less broad in its market impact.

In July of this year the Government announced its intention to change the de-rating factors applicable to battery storage assets under the Capacity Market rules, following indications that applying the de-rating factor uniformly to all battery storage assets was distorting investment decisions in the market. The Government sought the industry's views on the issue via formal consultation.

The de-rating factor affects payments under the Capacity Market rules, with the current factor – approximately 96% – applying equally to all energy storage assets regardless of the length of time they provide services to the grid. BEIS's concern was that this was over-valuing limited-duration storage relative to its contribution to security of supply. BEIS argued this has resulted in a large proportion of the new-build energy storage projects in the Capacity Market being sized for discharge at their full connection capacity for between 30 minutes to an hour, capabilities which do not actually match those needed to counteract more common and longer system "stress term" events.

Now, in December, the Government has released its response to the consultation. Despite some objections from the market, it is pressing forward with its plan to categorise batteries under the Capacity Market rules based upon discharge performance. The Government’s plan essentially means that assets will be de-rated according to their 'equivalent firm capacity', being the measure of the amount of firm capacity that would be required to replace them to make the same contribution to the security of supply (verified by the results of extended performance testing requirements). The following de-rating factors are set to apply to the upcoming T-1 and T-4 Capacity Market auctions: 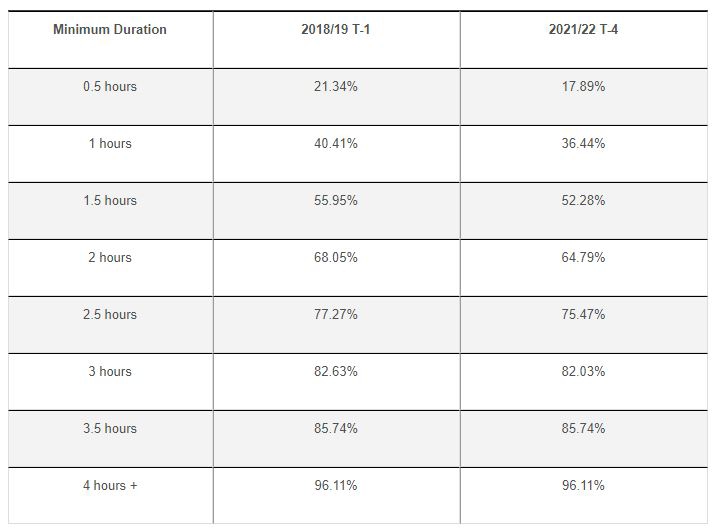 The proposed changes are not welcome news for those storage developers with pipeline of potential projects utilising technology at the lower end of the above performance scale. We would expect that these developers will be revisiting their financial models to reassess projected technology costs and Capacity Market revenues. The Government does not intend to allow storage assets to change bands on an annual basis in the case of longer-term agreements where there the asset is upgraded or degenerates, so it is important that all factors are considered from day one. Significantly, there also will be no differentiation between assets depending on which ancillary services it provides to the grid, so all service providers will need to make sure they assess their future financial models in light of these changes.

How AI will shape the life sciences sector