Aircraft incidents and accidents are complex. When one occurs, it can involve a multitude of factors such as human error, organizational problems, and/or environmental factors. Recently, a new risk factor related to technological advancement has formally been introduced to the aviation industry. This risk factor is 5G wireless technology.

5G is an invisible but critical force in our lives these days. The radio frequency spectrum supports our reliance and dependency on wireless communications and radio frequencies are key for business, personal cell phone use, and for autonomous technology and aviation.

Radio waves travel across the electromagnetic spectrum, and this spectrum is comprised of frequency bands. The spectrum bands are similar to a multi-lane highway, but with each lane having its own unique characteristics. These characteristics specify who can operate within that lane or spectrum band, and some bands are licensed. In Canada, the department of Innovation, Science and Economic Development manages the spectrum and in the United States, the Federal Communications Commission (FCC) is in charge of the spectrum.

5G is the fifth generation of wireless communication, opening up a new “highway lane” for increased connectivity, response time and bandwidth. The first generation (1G) was introduced in the early 1980s and led to wireless telephones that were able to transmit audio only. Technology advanced through to 4G, increasing our connectivity over time. The 5G network will set a new pace for business and communication.

5G communication operates within the 3.7-4.2 GHz frequency band. A portion of this band, specifically the portion designated as 3.7-3.98 GHz frequency, will be dedicated to 5G (sometimes referred to as the C-band). Traditionally the C-band does not have high traffic given its current occupation by low-powered satellite operation. However, that is changing and the C-band could eventually get very busy.

With the development and adoption of any new technology, discerning what is a conspiracy theory from what is a real threat can take time. Over the past few years (notably in late 2020 and early 2021), alarm bells from reputable sources are ringing about how the introduction of 5G could negatively affect the safety of low-level aviation operations.

To understand the issue, we have to first identify the avionics that raised the alarm bells about aviation safety.

An altimeter is the only instrument within an aircraft that allows the pilot to know how far above the ground or obstacles they are. The altimeter measures the distance between the aircraft and the ground using radio frequencies in the “highway lane” just above the 4GHz range. An altimeter is a key instrument used for take-offs, landings and low-altitude flying and can also provide critical input to other aircraft systems, such as traffic-alert collision avoidance systems (TCAS). Commercial aircraft, civil aircraft, military aircraft, helicopters, (and some UAVs) all have altimeters. 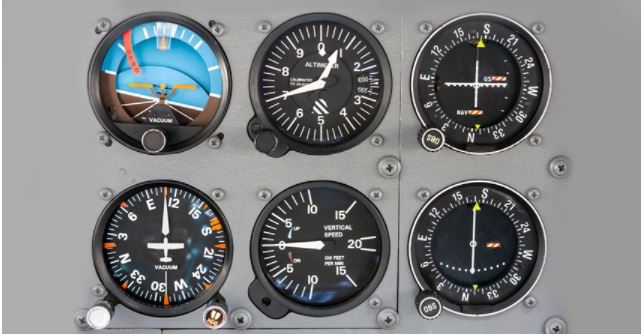 Radar altimeters operate in the 4.2-4.4 GHz space, just above the C-band intended for 5G.

Inaccurate altimeter readings can result in a significant and dangerous problem for the pilot, the aircraft, and any passengers.1

The RTCA report and the risk to aviation

The Radio Technical Commission for Aeronautics (RTCA) is a private, not-for-profit association. The RTCA works regularly with the government for aircraft equipment certification, and in the development of aviation industry standards for regulatory compliance.2

On October 8, 2020, the RTCA distributed a 231-page publication of its study that evaluated how 5G emissions could interfere with an aircraft’s radar altimeter performance.3 The publication was in response to the anticipated expansion of the 5G C-band. To date, the RTCA publication is the most comprehensive analysis on this topic.

The results of the RTCA’s testing and evaluation, and contained in its peer-reviewed publication, reveal “a major risk that 5G telecommunication systems in the 3.7-3.98 GHz band will cause harmful interference to radar altimeters on all types of civil aircraft – including commercial transport airplanes; business, regional, and general aviation airplanes; and both transport and general aviation helicopters.”4 The 5G interference could result in inaccurate altimeter readings, or complete altimeter failure, resulting in pilots being unaware of their distance from the ground.

Within the analysis contained in the October 2020 RTCA publication, an example landing approach at Chicago’s O’Hare Airport is used. The RTCA adopted a precision approach to Runway 27L, as this is the “single most utilized runway for arrivals at O’Hare”.5 The RTCA also assumed locations of 5G base stations based on the locations of five existing 4G base stations already within or near the approach path to Runway 27L. The RTCA then assessed the risk of 5G interference on an aircraft’s descent to Runway 27L. The RTCA found that all five base stations produced interference above the identified safety margin for an approach into O’Hare Airport.6

In its publication, RTCA did not rule out the possibility of “catastrophic failures leading to multiple fatalities, in the absence of appropriate mitigations” due to the identified risk of 5G interference to low-level aviation.7

As a result of the October 2020 RTCA report, multiple trade groups such as Aerospace Industries Association, Air Line Pilots Association, the National Business Aviation Association, and many others, requested that the FCC consider mitigation efforts.8 In early December 2020, the aviation industry voiced its concern about the FCC’s decision to reallocate a portion of the 3.7-4.2 GHz frequency band to make the 3.7-3.98 GHz portion available for 5G use. The reallocation to 5G may introduce interference to radar altimeters operating around the world in the 4.2-4.4 GHz band. For this reason, the aviation industry made a request to suspend the FCC’s auction for spectrum licenses scheduled to begin on December 8, 2020.

In addition, there was a December 1, 2020 request by the Federal Aviation Administration and the Department of Transportation to pause the FCC’s auction.9

Notwithstanding the testing and report circulated by the RTCA, or the petitions by the industry, the first phase of the FCC’s 5G Spectrum Auction concluded on January 15, 2021.10

This was the highest-grossing spectrum auction ever in the United States for the private-sector purchase of spectrum licenses in the C-band. Gross proceeds for the auction were above US $80.9 billion. The auction results will lead to the improvement of services to wireless consumers. Some of the auction proceeds will go to some satellite operators who currently operate within the C-band, in order to move those operations into another portion of the spectrum. This raises questions about those whose altimeters operate near the C-band and could be prone to interference as outlined in the RTCA study.

The FCC has dismissed the concern raised by the RTCA and believes that 5G operations within the C-Band will not cause problematic interference given the 200Mghz buffer between the C-band compared to the band within which radar altimeters operate. Further, the FCC has communicated it has concerns about the RTCA’s comprehensive study, citing overly stringent parameters adopted by the RTCA in its testing, and that the RTCA did not itemize its data in terms of altimeter brand or model.11 However, it is unclear if the FCC has its own information about what altimeter brand or model it has deemed is better at preventing 5G interference.

The advent of 5G technology will change the way our world communicates. It will assist driving economic growth, and represents an advancement that the aviation and aerospace sector should embrace. Nonetheless, there is only one comprehensive study so far, and there exists an apparent lack of communication between the RTCA and the FCC about the identified risk to aviation safety.

Therefore, how global aviation and telecommunication advancements will proceed in parallel is uncertain. The advancements could mean changes to 5G operations, or perhaps it could mean changes to altimeter designs, in an effort to reduce or eliminate any interference. Honeywell, a leader in radar altimeters, is apparently testing in this space.12 However, designing and replacing altimeters in all aircrafts that are potentially impacted by 5G may not be feasible, and it is not clear if the aviation industry alone as it stands could bear such a cost.

In France, the concern over the 5G risk resulted in a slowdown of 5G deployment as the issue is further assessed by the DGAC (the French-equivalent to Transport Canada or the FAA). In the case of the DGAC, measures may be added to create zoning protection around airports to adapt to the introduction of 5G “as with each technological evolution” that occurs.13 The approach in France could also lend itself to procedures changing in how one uses avionics. Alternatively, this approach could impact when and how 5G is utilized around certain airports. On February 3, 2021, the UAE’s General Civil Aviation Authority issued Safety Alert 2021-03 to address “major operational risks” that 5G technology could have on the operation of radio altimeters and wireless avionics intra-communications Radio.14

In Canada, discussions are occurring between Transport Canada (TCCA) and the Innovation, Science and Economic Development branch of the government about the liability concerns raised with 5G implementation. TTCA’s proposed approach is safety-focused, in that frequency band selection should not be influenced by economic reasons or harmonization with what the United States is doing.15

The long-term impact of 5G on aviation is still unknown. Yet, within the nascent stages of this identified risk, potential lessons are available and within reach.

Wireless telecommunication and the aviation industry are both in existence with the end-goal of bringing people together and, therefore, a lack of connection between these two giant industries on the 5G issue is the antithesis of what each represents. A significant risk has been identified that could influence altimeter usage. However, currently only one comprehensive study by the RTCA exists, which was distributed in October of 2020.

Alongside this development, economic factors are driving wireless decisions on a necessary fast track. A lack of understanding and discussion in the early stages of two industries colliding (aviation and wireless communication) could lead to catastrophic failures. Alternatively, turning back to the roots of connectivity and engaging in open and compromising dialogue could also lead to technical ingenuity. The second path, although more challenging at this stage, may be the best option to ensure continued economic growth alongside the preservation of aviation safety.