On October 2, AB 8652 was introduced in the New York Assembly as a companion to Senate Bill 5771. These bills would substantially amend New York law regulating gift certificates, which includes some open-loop and closed-loop prepaid cards. This legislation would make four major changes to the current statute. It would (1) re-define “gift certificate,” (2) broaden the fee restrictions, (3) prohibit expiration dates, and (4) establish a cash redemption requirement. A chart detailing the proposed changes is included below.

Current New York law broadly defines “gift certificates” to include open-loop and closed-loop prepaid products that are not linked to a deposit account. The new bills would replace this broad definition with an equally broad, but less clear definition. According to the Senate and Assembly committee reports, the intent of the change was to “make clear that the definition of ‘gift certificate’ includes gift cards.” Seeing as the existing law cribs language from Reg E’s definition of “store gift card,” we’re not sure that such a clarification is necessary. Unfortunately the drafters did not address the glaring ambiguities surrounding the phrase “linked to a deposit account,” which is in the existing and proposed definitions. What does linked mean? Does this mean that any card program where the underlying funds are held in a bank account is exempt? What qualifies as a deposit account? Is a sub-account in a pooled account a deposit account? Inquiring minds want to know.

Finally, the proposed bills would establish a redemption right if the “gift card” has a balance of $20 or less. There are a few troubling aspects to this requirement:

Let’s hope this is just the first draft of New York’s amendments to its gift card statute and that the legislature will refine the bill. The filing of the companion bill in the Assembly, however, does suggest that legislators are ready to move forward and this bill may be in close to final form. Interested parties should act quickly to submit their concerns and suggestions to lawmakers. 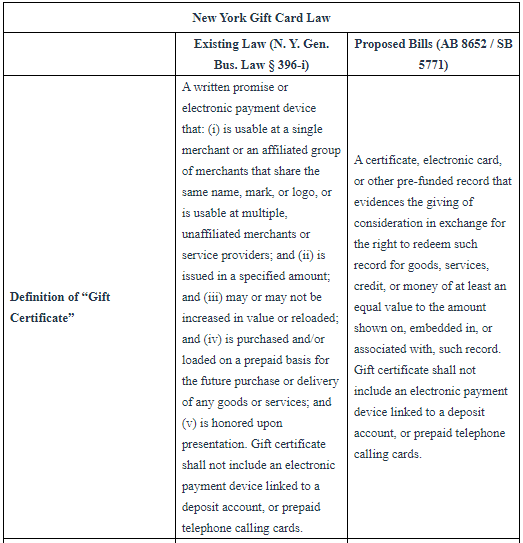 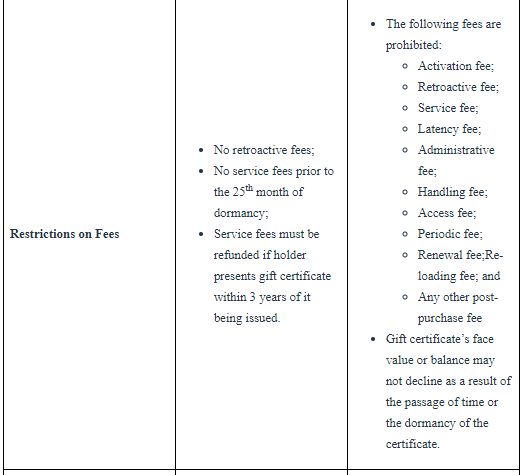